What Thousands of Housing Discrimination Complaints Mean in 2018 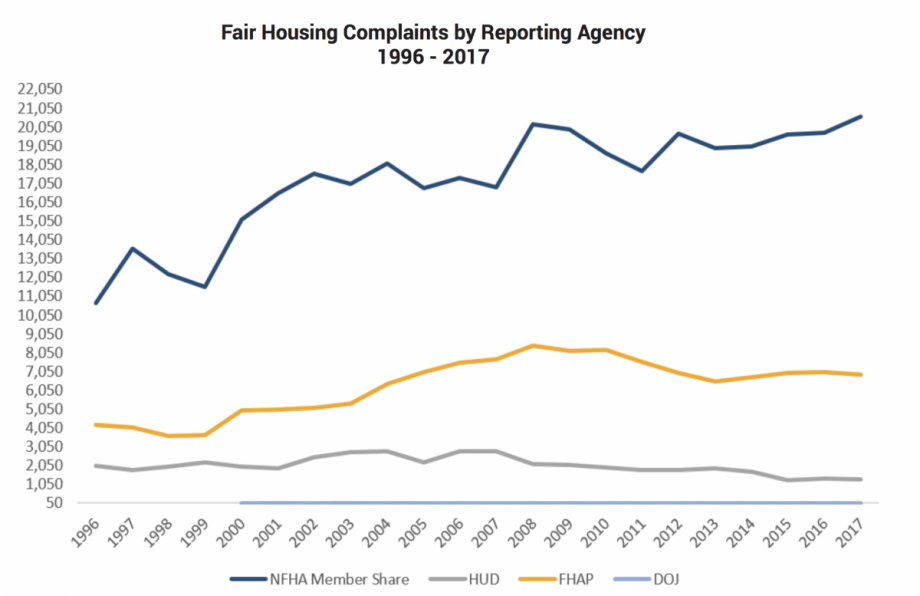 James and Roxsana Hart are Section 8 recipients who lived on the third floor of their Los Angeles apartment building. James uses a wheelchair, so the Harts asked to move to a first-floor apartment. The management of Premier Apartments, LLC did not respond. In 2016, the building elevator broke and was not repaired for three months. When James needed to use the stairs to get to a medical appointment, he fell, hit his head, and has been bedridden since. After the fall, the management company issued the Harts an eviction notice.

In November 2017, Premier Apartments agreed to pay $1 million to settle claims that they discriminated against the Harts.

Part of the Civil Rights Act of 1968, the Fair Housing Act was created to address deep-seated inequities as well as help undo the segregation caused by redlining. But as the housing alliance’s new 2018 fair-housing trends report, “Making Every Neighborhood a Place of Opportunity,” shows, more work needs to be done. Redlining, for example, “is not a thing of the past,” the report says, based on an investigation by Reveal from the Center for Investigative Reporting, which showed that in 61 metros, mortgage loan denial rates remain much higher for black and Latino applicants than for white applicants, even when controlling for income.

“It has been 50 years, and the Fair Housing Act still has not been fully implemented,” said Lisa Rice, National Fair Housing Alliance president and CEO, in a statement. “As the 2018 trends report shows, we must put an end to the many institutionalized barriers that prevent too many families in this country from fair access to housing.”

In addition to tracking housing discrimination complaints (half a million since the organization began compiling the data in 1996), the report calls out a number of recent federal developments that the NFHA says are concerning. Next City has covered a number of these developments, such as the suspension, under Ben Carson’s HUD, of the Affirmatively Furthering Fair Housing Rule, which required municipalities receiving federal funding to report in detail how their housing policies were not furthering segregation. (HUD calls its action a delay, but the NFHA argues that it is effectively a suspension.)

The organization also points to a number of other worrying developments for housing advocates, including the appointment of former Congressman Mick Mulvaney (R-SC) to head the Consumer Financial Protection Bureau, an agency he was deeply critical of as a Congressman.

But it’s not all bad news, the report says, citing several significant victories for fair-housing advocates in 2017. The Small Area Fair Market Rent rule, which changes the rates at which Section 8 housing vouchers pay out to give low-income people greater flexibility in choosing a place to live, was unsuccessfully challenged by HUD and went into effect January 1, 2018. The DOJ’s suit against Chase Bank arguing that it charged black borrowers higher rates on home loans was settled in January 2017, requiring Chase to create a fund of $53 million and locate borrowers eligible for compensation. And in May 2017, in Bank of America et al. v. City of Miami, the U.S. Supreme Court upheld the right of cities to sue banks whose practices harm residents.

“This is a pivotal year for fair housing,” said Rice. “We cannot build a thriving society as long as our nation is plagued by discrimination, segregation, and severe economic inequality.”