What Street Vendors Mean for this Neighborhood in Queens – Next City

What Street Vendors Mean for this Neighborhood in Queens 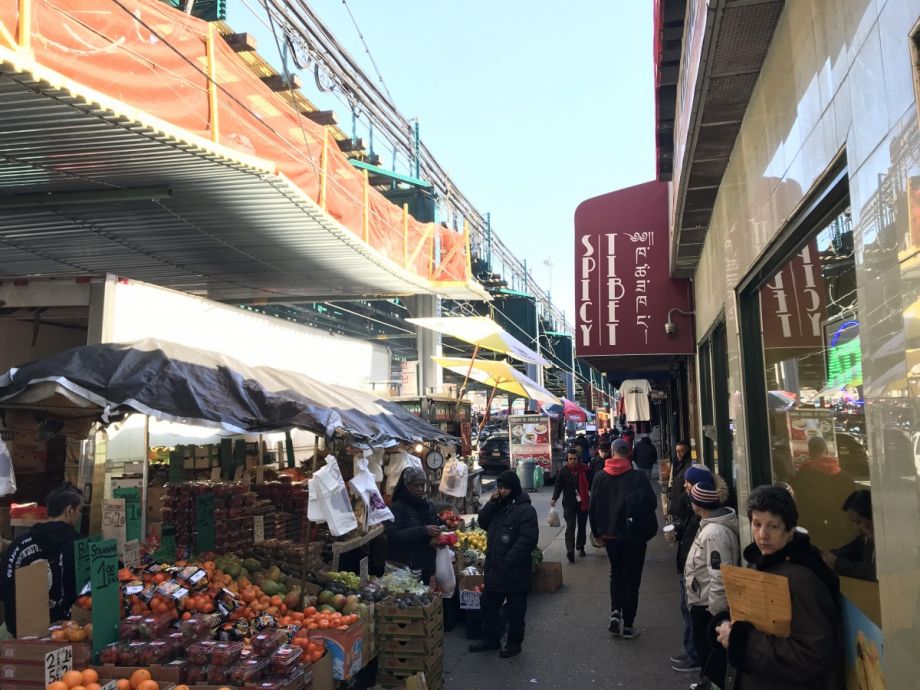 The Commercial District Needs Assessment for Jackson Heights, in Queens, New York, was one of just two to include street vendors' in the assessment, although they are a vital part of the neighborhood's economy. (Photo by Oscar Perry Abello)

For Shrima Pandey, who grew up in and around the Jackson Heights neighborhood of Queens, New York, street vendors were always part of city life.

On a fair weather day, around a hundred street vendors can be found along Jackson Heights’ main commercial corridors, Roosevelt Avenue and 37th Avenue, selling everything from fresh fruits and vegetables to tacos and burritos to religious items. Some have food trucks or carts, others spread out their wares on tables. They reflect the diversity of the neighborhood, and of Queens, collectively speaking at least nine languages at home. Most live in Jackson Heights as well, and they average eight years as street vendors, according to one survey.

Born in Nepal, Pandey emigrated to Queens with her family in 1997. Some of her cousins ended up in Michigan, where there weren’t many street vendors around. Visiting Michigan growing up helped Pandey realize how special street vendors were to the neighborhoods where she grew up in Queens. “[Michigan] was a whole different world,” Pandey says.

After studying anthropology and eventually getting a master’s degree in migration studies in the U.K., Pandey came back to Queens in 2017 to find developers, the city and others not realizing the special importance of street vendors to Jackson Heights. They were planning changes to the neighborhood where she grew up without accounting for the importance of street vending as part of the community — as a way of earning a living and meeting community needs.

Pandey recently spearheaded an effort to bring some new data and hopefully some clarity around the question of what value street vendors bring to her neighborhood. As small business program manager at Chhaya Community Development Corporation, Pandey was the point person for the Commercial District Needs Assessment for Jackson Heights, Queens, recently published by NYC’s Department of Small Business Services. Out of 20 commercial district needs assessments so far, Jackson Heights is only the second that has included a survey of street vendors.

“It’s important to have the street vendor data in here, because it’s one of the more contentious points in the city,” Pandey says. “So it’s validating for [the Department of Small Business Services] to have printed information about street vendors.”

It wasn’t by design, but the Jackson Heights Commercial District Needs Assessment arrives at an opportune moment for street vendor advocates, who have been pushing the city for years to lift its cap on street vendor permits.

The push-and-pull between the city and street vendors goes back a long way. In the 1930s, citing health and hygiene concerns, Mayor Fiorello LaGuardia got the city to construct a series of large public markets to move vendors off streets and into designated areas. In 1979 and 1983, a series of reforms cut full-time street vendor permits in NYC from 12,000 to just 3,000. Part-time and additional permits push the cap up to 5,100, which hasn’t budged since the 1980s. The thinking by the city at the time was that street vendors had gotten out of control and were over-crowding city sidewalks.

Vendors and their supporters say the cap must be lifted. It only costs $200 to renew a street vendor permit every two years, and permits can be renewed indefinitely, leading to a 1,500-person long waitlist for permits. Some permitholders illegally lease their permits on underground markets for $20,000 or more. Versions of a bill to lift the street vendor permit cap have been floating around NY City Council since at least 2016. The most recent version would double the cap over a ten-year period, issuing 400 new street vendor food permits a year. Meanwhile, at the state level, State Senator Jessica Ramos, whose district includes Jackson Heights, has introduced legislation to bar any city statewide from putting a cap on the number of street vendor permits issued.

But beyond those legislative battles, Pandey sees the new Jackson Heights Commercial District Needs Assessment as being relevant to many discussions with officials and potential partners looking to invest in the neighborhood in ways that acknowledge rather than ignore or discount the role of street vendors in the past, present and future of Jackson Heights.

“We’re planning to have more conversations with elected officials to talk them through this report and make sure that they’re able to use this to amplify any legislation or anything that they want that would improve the things we’re seeing here,” Pandey says.

The NYC Department of Small Business Services has been funding and publishing Commercial District Needs Assessments since 2015, using a combination of local tax dollars and, more recently, Federal Community Development Block Grants. Community-based partners like Chhaya Community Development Corporation apply to the department for funding and drive the work on the ground. The community-based partner makes the decision on whether to include a street vendor study as part of their assessment.

“Since [the Corona assessment] it’s always been an option for groups to do it if they felt like the street vendor population in the community was a substantial enough presence in their commercial district,” says Michael Blaise Backer, deputy commissioner for neighborhood development.

Chhaya brought in the Street Vendor Project again to conduct the bulk of the street vendor survey work.

“You can’t talk about [Jackson Heights] without talking about street vendors,” Attia says.

The Jackson Heights Commercial District Needs Assessment covers nearly 50 blocks of Roosevelt Avenue and 37th Avenue, running parallel to each other, as well as major cross streets cutting through the area, and a few smaller commercial sidestreets. 74th Street is the heart of “Little India,” and also has a major subway stop with access to five lines. Another subway stop at 82nd street anchors the eastern half of the commercial district.

The 7-train subway line rumbling overhead along Roosevelt Avenue is a key feature of the neighborhood; the staircases coming down from the stations offer sheltered spaces popular with street vendors.

Like the other assessments before it, the Jackson Heights Commercial District Needs Assessment began with a storefront inventory, counting 1,053 storefronts, 4.6 percent of which were vacant. The most common storefront businesses were professional services like travel agencies, accountants and realtors (123 storefronts); clothing, shoe and jewelry shops (100 storefronts); beauty/nail salons and barbershops (99 storefronts); and doctor, dentist and medical services (90 storefronts).

In a smaller survey of 118 businesses, 81 percent had five or fewer employees; 92 percent rented their spaces; and 49 percent said business had improved or stayed the same over the past year while 36 percent said it decreased (14 percent didn’t give a response). Businesses averaged 11 years in Jackson Heights, including 12 that have been in the neighborhood more than 30 years.

The street vendor portion of the work also began with an inventory. On June 9, 2019, at 3 p.m., with a high temperature of 78 degrees, the team counted 101 street vendors out in the Jackson Heights commercial district area. The most popular goods offered were “prepared hot foods” (32 vendors), ice cream (18 vendors), jewelry and accessories (17 vendors), and religious items (12 vendors).

At one point, religious items were counted under simply “merchandise,” according to Pandey. But, “it was important to call that out because it says a lot about the neighborhood in terms of who’s buying what, culturally,” she says.

Even more important for surveyors to keep in mind, 64 percent of Jackson Heights residents were born outside the U.S. — higher than the 48 percent of Queens that is foreign-born. The neighborhood has been living under what seems like a constant threat of Immigration & Customs Enforcement raids resulting in deportation. So it can be difficult for just anyone to walk around Jackson Heights with a clipboard asking questions of street vendors.

It helps that the Street Vendor Project could count some members along the sidewalks of Jackson Heights. It also helps that the organization’s staff, including legal director Matthew Shapiro, have years of experience doing outreach to street vendors.

“I had to build up some credibility first,” Shapiro says. “Folks might be a little bit leery, talking to me, but once I explained what this is, I’m not asking their name or contact info, I’m asking them about their work, which a lot of vendors are happy to talk about because of all the issues that they face.”

Surveyors also asked street vendors what they liked about the neighborhood. Popular answers included foot traffic from the subways, good relationships with other businesses, and “the opportunity to serve people from my community.”

Seeking to shed some light on the situation, graduate student Kathryn G. “Kurt” Wheeler researched relationships between street vendors and brick and mortar businesses for her master’s thesis at the Pratt Institute School of Architecture. Wheeler’s research looked at four neighborhoods across New York City. In Jackson Heights, Wheeler found that vendors typically avoided selling in front of storefront businesses that sell similar products, and usually opt to sell in front of businesses with lower foot-traffic or larger chain stores. Wheeler went so far as to write, “brick-and-mortar businesses do not see vendors as competitors and some even have a symbiotic relationship with nearby vendors.”

“Our hope would be that reports like these in both [Corona and Jackson Heights] would allow for stronger dialogues between street vendors and brick and mortar businesses so that whatever solution comes out, that it really looks at both perspectives and leads to a solution that allows both to exist,” says Backer, at the NYC Department of Small Business Services. “Maybe it allows for a more nuanced and place-based approach to challenges like how we use our sidewalks.”

EDITOR’S NOTE: We’ve updated this piece to correct the year that Pandey moved to Queens.