What Science Says About Mexico City’s New Airport – Next City 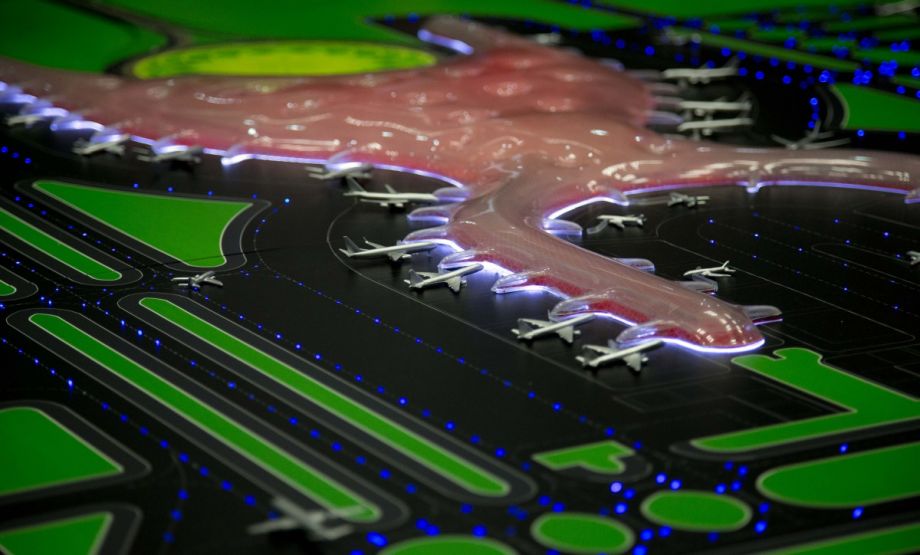 A detail of a mock-up of the new Mexico City international airport is shown during the announcement of the design of the city’s new $9.2-billion airport, Wednesday, Sept. 3, 2014. British architect Norman Foster and Mexican colleague Fernando Romero have had their design chosen for the new Mexico City airport that will cover nearly 11,400 acres of former lakebed adjacent to the present, over-crowded facility. It will have six runways and capacity to serve 120 million passengers per year when it is finished, Mexican authorities announced. (AP Photo/Eduardo Verdugo)

Fernando Córdova Tapia is an ecologist first and foremost. But as a Mexican scientist concerned about climate change and environmental justice, he doesn’t have the luxury of abstaining from political activism.

By day, Córdova is a faculty member at the National Autonomous University of Mexico. Away from the office, he helps lead the nonpartisan Union of Scientists Committed to Society (UCCS for its initials in Spanish). There, he focuses on analyzing government-issued environmental impact studies and communicating their shortcomings to communities in the path of federal infrastructure projects. He says such reports are often politicized and unreliable.

“UCCS was born out of a need for scientists to become more engaged in public life,” Córdova says. “In Mexico, there’s this notion that scientists occupy their own social class isolated from the rest of society, but we have so much information that needs to get back to people.”

Córdova’s current focus is Mexico City’s massive new airport. In reviewing the government’s environmental impact study, he and his UCCS colleagues identified several factors that were omitted (they believe intentionally so) from its analysis. Despite the government’s claims to the contrary, they say the airport stands to exacerbate the city’s ongoing water crisis by inhibiting natural drainage and inducing an insatiable demand for drinking water. In response, UCCS has engaged in a long-term campaign to shift public opinion and force the cancellation of the project in its current form.

While the group has scored some notable victories since its founding in 2006, its effort to block the upcoming airport — a major tenet of outgoing President Enrique Peña Nieto’s domestic legacy — is perhaps its starkest challenge yet.

Most of Mexico City sits atop the ancient Texcoco lakebed in a valley without much natural drainage. While its original inhabitants developed complex agricultural, transportation, and drainage systems that allowed them to live within their ecosystem’s natural limits, the conquering Spaniards had other ideas. They built dams and canals to divert water away from the basin, thereby allowing them to build on its spongy soil.

As a consequence, the Mexico City of 2018 is both severely dehydrated and struggling with devastating floods. The city’s massive concrete footprint prevents rainwater from refilling the aquifers beneath its residents’ feet. That, in turn, causes the city to sink deeper into the marshy lakebed, lessening the effectiveness of its gravity-dependent drainage systems. The end result is a metropolitan region of more than 20 million residents in which drinking water is sparse while wastewater collects in the streets. According to UCCS’s analysis, the new airport will exacerbate both of these problems.

The political elite in favor of the project has largely ignored the scientists’ concerns. Mexico has long relied on an economic development strategy of luring foreign investment, which necessitates a competitive intercontinental airport. The city’s current airport, however, has been operating at capacity for about 20 years.

Having seen an opportunity to boost his country’s national economic indicators, Peña Nieto threw his weight behind a replacement airport in 2014. In his zeal to get the project done, his team chose to construct the new airport on federally-owned land atop 11,400 acres of low-lying Texcoco lakebed. The problem: that land is essential to the region’s natural drainage.

Mexico’s Secretariat of the Environment and Natural Resources (known by its Spanish initials, SEMARNAT) was the agency responsible for evaluating the project’s environmental impact. Its handling of the process is what catalyzed action by nearby residents, and subsequently, Córdova and the UCCS, who were concerned by how quickly the project was approved. Peña Nieto first announced his intention to build the airport in September of 2014. By December of that same year, it had been formally given the go-ahead.

“They wanted to approve this massive project as quickly as possible,” Córdova says. “To do so, they buried people under a mountain of misleading information. They talked about how beautiful the airport would be, that it [would] have certain sustainable features, that it would be a source of pride for Mexico. They tried to steer the public’s attention completely toward the design of the airport and away from deeper issues.”

Their ability to do so was aided by a lack of formal requirements for public engagement. Córdova says SEMARNAT used its environmental focus as a pretense to ignore feedback that sought to address cultural or economic dimensions of the project. SEMARNAT, like most federal agencies in Mexico, has broad legal authority to ignore public opinions it considers outside its realm of expertise.

“Imagine an indigenous community wanting to weigh in on a project,” Córdova says. “They’re handed a 1,500-page technical document and asked to respond to it. They’re obviously not being consulted in good faith.”

That is where UCCS comes in.

Having identified a number of shortcomings in both the government’s environmental analysis and public engagement processes, UCCS partnered with local organizations to equip nearby residents with scientific analysis and encouraged them to challenge the project through both administrative and legal channels. They also waged a coordinated media campaign to rally Mexicans in opposition to the airport.

América del Valle, a lifelong resident of the area near the new airport site and longtime local activist, said UCCS has become an important ally in her community’s resistance to the project.

“We feel very lucky to have support from scientists who are willing to align themselves with the people,” del Valle says. “The work they’ve done has given us a level of credibility.”

While it’s been an uphill battle, UCCS and its partners have managed to inform the national conversation about the airport’s viability and make it an issue in this year’s presidential election.

“In this election season, the Mexican media has used our findings to inform a critical perspective that’s free of conflicts of interest,” says Omar Arellano-Aguilar, another UCCS member.

Although the majority of candidates for the July 1 presidential election still support the project, they have been forced to defend their views in debates and in interviews with journalists. In March, the front-runner even announced his intention to halt the new airport, citing corruption as his main concern but also mentioning the lakebed issue, Reuters reported.

For Córdova, despite the airport construction moving forward, the campaign has made progress in the bigger picture. By equipping regular people with a scientific understanding of the issues at play, he believes UCCS has positioned them to make their case in spaces that were previously off-limits to all but the most well connected and academically credentialed voices. Over the long term, he hopes these efforts will set a precedent for meaningful public engagement and honest environmental analysis in federal infrastructure projects.

“We’re helping the community develop arguments that SEMARNAT is obligated to listen to,” Córdova says. “They don’t love that we’ve done that.”

Paolo Cisneros is a freelance journalist and community development consultant based in Querétaro, Mexico. He holds a master's degree in urban planning and policy from the University of Illinois at Chicago.