What Obamacare Means for Local LGBTQ Resources – Next City 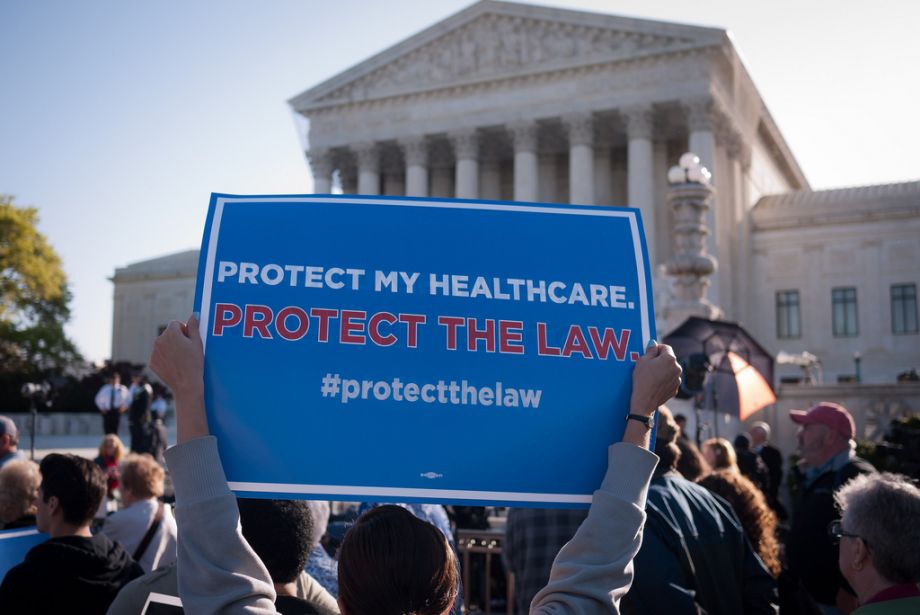 Supporters of Obamacare gathered outside the Supreme Court in anticipation of Thursday’s ruling. Credit: Paul Smith on Flickr

After meandering through the courts for the last two years, the Patient Protection and Affordable Care Act, commonly known as Obamacare, was deemed constitutional by the U.S. Supreme Court in a much-ballyhooed 5-4 decision.

The legislation, one of the laurels of Obama’s presidency, requires that all citizens purchase private health insurance or face an annual penalty assessed by the IRS. If Mitt Romney doesn’t make good on his promise to repeal Obamacare, the reforms will all be in effect by 2014.

One of the many provisions to survive the court’s vetting in their entirety is the law’s “guaranteed issue” clause, which prevents insurance companies from denying coverage to clients solely on the basis of a pre-existing medical condition. Every state will have to set up insurance exchanges that aggregate information on different plans and premiums, leveraging the purchasing power of groups to offset the risk of taking on unwell patients.

While private insurers and hospitals are battening down the hatches for what will almost certainly be economic reckoning — the Indianapolis Star is already reporting large sell-offs of insurance company stock — a different story is playing out for local medical service providers, especially those whose services target communities directly affected by the change in coverage rules.

One such organization, the Mazzoni Center, an LGBTQ community space and primary care provider in Philadelphia, is already thinking about what its medical programs might soon look like in its role as the largest HIV wellness site and second-largest HIV testing site in the city.

Founded in 1979 as an LGBTQ community center, the center added a primary care office in 2004 to address what the center’s Medical Director Robert Winn called Philadelphia’s lack of commitment to “addressing LGBT health disparities at the time.”

The center initially provided primary care for uninsured patients, but they soon became popular with a broader community looking for healthcare specifically for LGBTQ-related treatment.

“We quickly discovered that there was great demand for the types of services we were providing [from those with insurance],” said Winn.

Now with roughly 35 percent of their patient panel uninsured at any given time, doctors at the Mazzoni Center will be among the first to encounter the on-the-ground consequences of the health care ruling.

About 19,000 of the 1.2 million Americans living with HIV are right here in Philly. At the time the primary cary center was established at the Mazzoni Center, there were few dedicated medical services designed to meet the needs of this population. Currently, the Mazzoni Center foots the bill for uninsured and underinsured patients using funding earmarked by the Federal government over 20 years ago.

“In the past, we received dollars specifically for HIV care for uninsured and underinsured folks through the Ryan White Care Fund,” explained Winn.

Congress established the fund in 1990, which makes special provisions for HIV patients living in urban communities.

With this new legislation, Winn said that the center will help connect patients to the new insurance exchanges, such that insurers will cover what the federal funding once did.

And it seems like the reforms are coming in the nick of time. As politicians have become more hostile to funding HIV/AIDS research, the fund might bottom out sooner rather than later. Health care professionals at the Mazzoni Center are worried that funding might dry up before Pennsylvania has time to set up its insurance exchange, potentially leaving those making too much money to qualify for Medicaid and too little to afford private insurance in a service provision “doughnut hole,” reflecting the national debate over healthcare for the country’s working poor.

The issue is further complicated by the Supreme Court’s ruling that Obamacare cannot mandate the expansion of state Medicaid programs unilaterally, putting those in the grey area in a particularly precarious position if Pennsylvania decides not to increase coverage.

“We are a little concerned about the timing,” says Winn, indicating that the center is currently seeking other means of public funding to cover the potential shortfall for at-risk patients.

Even though the center began to meet needs not met by city health services, Winn says that the Mazzoni Center and municipal health departments now enjoy a positive working relationship. “By teaming up on prevention and laboratory services, we are able to keep costs down for our uninsured patients,” said Winn.

If a larger segment of patients do get some form of private health insurance, the question arises as to whether patients will keep coming to the Mazzoni Center.

For his part, Winn does not anticipate that patients will start going elsewhere. The Mazzoni Center, along with similar organizations like the Whitman-Walker Clinic in Washington, D.C. and the Callen-Lorde Community Health Center in New York City, is specially equipped to cope with resources that go beyond basic medical services. It also tackles other issues relevant to those suffering from income and health disparities in the LGBTQ community, such as housing services, counselling resources, case management — all issues that big-ticket federal and municipal legislation has yet to take up.