What Narendra Modi, India’s Likely Next Prime Minister, Will Mean for Cities – Next City

What Narendra Modi, India’s Likely Next Prime Minister, Will Mean for Cities 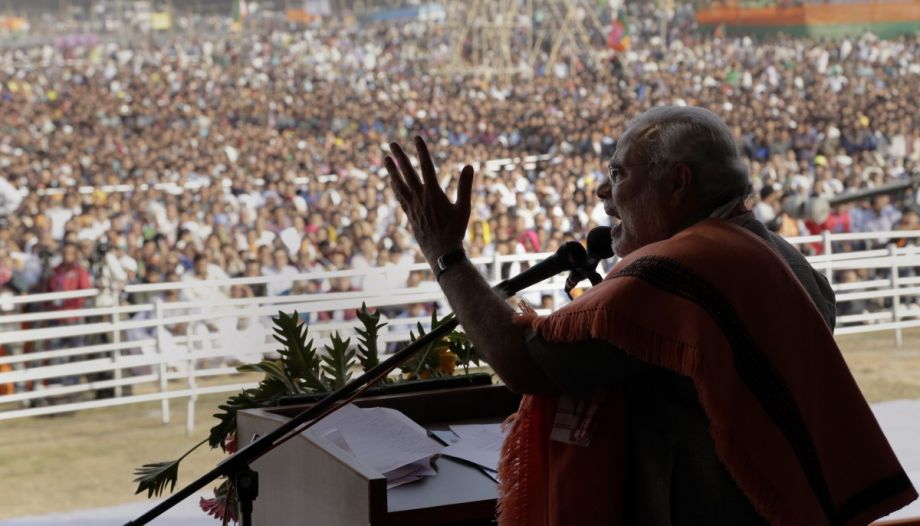 Starting last week and continuing for a month from now, Indian voters will head to the polls in the largest exercise of democracy in human history. From illiterate peasants to urban business tycoons, more than 800 million voters are eligible to choose their parliament, which will in turn elect a prime minister. The top two contenders are Rahul Gandhi, of the center-left Congress party and the United Progressive Alliance, and Narendra Modi, of the center-right Bharatiya Janata Party (BJP) and its National Democratic Alliance. Gandhi is from India’s most distinguished political dynasty — three members of the Nehru-Gandhi family have been prime minister since independence — but Modi is widely expected to win.

Modi’s main strength is economics. The markets are ecstatic over his rise, and he’s running largely on his record of growth in Gujarat, which he’s led as chief minister since 2001. The northwestern Indian state has seen 10.3 percent annual growth between 2003 and 2012, 2.4 percentage points greater than the country as a whole, appealing to a country whose economic growth rate has slipped to around 5 percent.

While Modi undoubtedly has an edge over his rival in terms of economics, his record on religious accord — traditionally important in a region torn apart in the past by schisms between Muslims and Hindus — is less laudatory. Modi, a Hindu nationalist, is widely blamed for fanning the flames of religious hatred earlier in his career, and some blame him for the deaths of thousands in clashes between Hindus and Muslims in the early 2000s. On the other hand, Hindu nationalist rhetoric has been absent from his latest campaign, with some hoping that those days are behind him.

India has an ambivalent relationship with urbanization, but Modi, whose base of support lies in the casteless urban middle class, is solidly in favor of it. The BJP has traditionally been much more friendly to urbanization than Congress, which has ruled India for most of its post-colonial history and, in keeping with the teachings of Mahatma Gandhi, valorizes rural life.

“There’s this clear, growing demand for the efficient provision of government services, and Congress I think has tried to compete along the lines of [government] transfers,” economist Paul Romer, who has studied India with the NYU Stern Urbanization Project, told Next City. “They wouldn’t say it this way, but I think their basic strategy has been to try to impede the movement from rural areas to urban areas.”

Congress’ grip on Indian politics has been weakening over the past few decades, and Modi’s tenure in Gujarat offers some hints as to what he might bring for cities across the nation.

India has been slower to urbanize than other countries partly because density in its cities is so strictly regulated. Even megacities like Delhi and Mumbai set no more than a few, relatively low uniform densities to apply over vast swaths of land, limiting buildings to two or three stories at most. Indian urban planners have traditionally felt alarm at cities’ high population densities despite a lack of building density, and assume that increased construction will increase population by a commensurate amount. They tend to doubt that the process that played out in New York City a century ago or Shanghai a generation ago — of increased building accompanying more floor space per person — will happen in India. As a result, desirable areas are limited to very low densities.

Modi has, however, presided over a general loosening of zoning regulations in Gujarat. Smaller cities have already seen increased densities. In Rajkot, a city of 1.6 million, Modi personally announced the decision, saying that “the state government has decided to approve a 25 percent increase in [allowed density] for the benefit of common people” — a move also welcomed by real estate developers. Jamnagar and Surat, too, saw density boosts.

According to the new city plan for Ahmedabad, Gujarat’s largest metropolis, vast swaths of the central city will be buildable up to fairly high densities, allowing for a dense thicket of mid-rises and even short towers. While transit corridors will be upzoned and left in private hands, slum dwellers on the banks of the Sabarmati River were removed to outlying areas, as is customary in Indian urban renewal projects. In addition to rezoning land along the river, the project reopened waterfront space for public use and added amenities like an amphitheater, food courts and play areas.

“[Modi] doesn’t spend too much time on policy discussion,” Alain Bertaud, an NYU researcher who has worked in India, wrote in an email. “However when he was convinced that something makes sense — like increasing FSI floor space index in Ahmedabad’s central district — he will do it, and make sure that every bureaucrat follows.”

Modi has often coupled density hikes with infrastructure by charging developers for increased FSI. In Ahmedabad, the money will mainly go toward infrastructure, while in Surat the connection was even tighter — development at densities up to mid-rise levels will finance Outer Ring Road, a 66-kilometer (41-mile) corridor around the city. “Surat has also made its mark as the ‘Flyover City of Gujarat’,” reads his website, “due to the many flyovers that have been built to ease traffic from congested areas.”

In terms of transit, Ahmedabad under Modi pursued a bus rapid transit system that’s proven more successful than others in India. Pune’s BRT rollout has been an outright disaster, for example, with its leadership sent to Ahmedabad — or “NaMo Land,” as the Pune Mirror calls it, referring to Narendra Modi’s leadership — to examine the 75-kilometer network and figure out how to make its own lines work. While Modi prioritized the BRT system, the city is currently planning for a proper metro line that will connect it with the nearby state capital, Gandhinagar.

“Because he is a micromanager — to get anything done in India, you have to be — it is difficult to know how he will react when prime minister,” Bertaud wrote of Modi. “Maybe he will get bogged down in details, or he might delegate to a few trusted aides?”