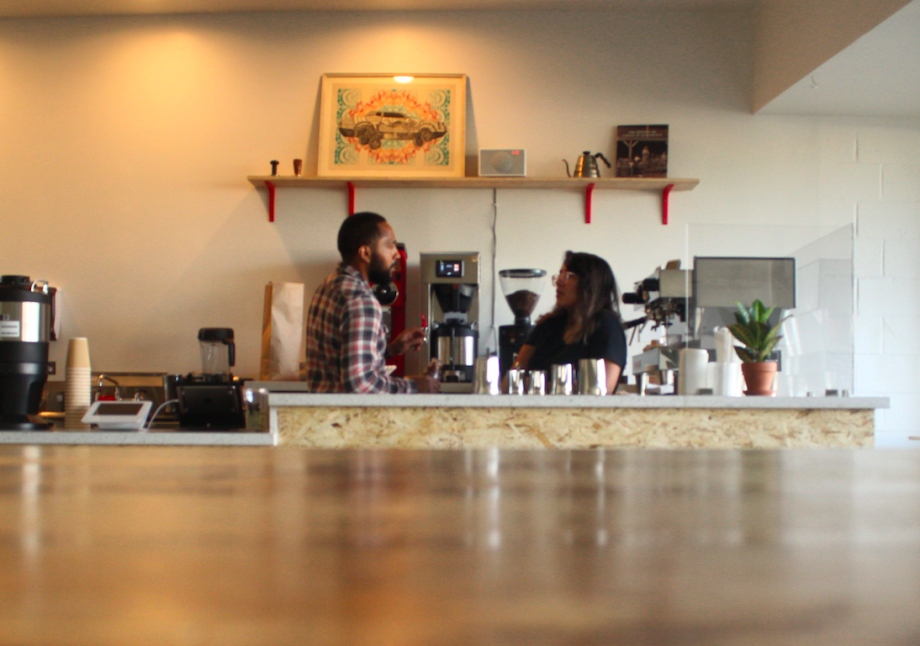 Patria opened in May. (Photo courtesy of Geoffrey Martinez)

It’s not so unusual for tourists to flock to Compton to get a glimpse of the hip-hop culture with which the city is still largely associated.

Not long ago, Geoffrey Martinez, 39, of Compton, came across two tourists visiting from the Netherlands who wanted to see the city they knew from references in the Grand Theft Auto video game.

They wound up at the independent coffee house that Martinez recently opened in Compton.

“When they were there, they were shocked,” says Martinez. “This is not what we thought we would see,’” he envisions them thinking.

Martinez opened Patria — which in English translates to “homeland” — in May, after years of roasting coffee from his Compton garage. It’s thought to be the first independent coffee house in the city. Martinez says he would often have to drive out of Compton for a decent coffeehouse experience and would think, “Why can’t we have one in our city?”

“I waited years for someone to do it and I realized no one was doing it,” he says.

“It becomes a quality of life (issue) where we lack destinations or communal spaces where we could walk or ride our bicycles to,” he says.

Martinez already had a location in mind — a 950-square-foot space he would often pass by on his way to work. It’s in a small shopping strip on Alameda Street, next to a hair salon and near a park. Martinez liked that it was close to homes and green spaces.

He created a crowdfunding page on Indiegogo and raised more than $14,000 to help open up shop. He also took out small business loans, received private donations, and used earnings from selling the coffee he would roast. It cost him about $75,000 to open the coffee shop, which included getting plumbing and electrical work done along with other necessary permits.

Opening the coffeehouse in Compton was a process, Martinez says.

The space never had a certificate of occupancy, Martinez says. He had to make the necessary improvements to bring it up to certain building codes and California energy efficiency standards.

Martinez envisioned getting local contractors who would hire employees typically shut out of the labor market. It was tougher than he thought. He found there was a shortage of licensed contractors in the city, and other contractors he sought from other cities wouldn’t follow through once learning the project was taking place in Compton.

About three months in, Patria has six employees. Martinez says he was intentional about hiring people of color. Most of the people who walk into Patria are from the community or nearby cities, he says.

“I wanted to hire people who look like us in the community,” Martinez explains.

Martinez also started an apprenticeship type program teaching baristas how to operate an espresso machine and other techniques. To Martinez, it’s important that the people of Compton get a quality cup of coffee.

“That’s part of giving people a service with dignity, not just treating them nicely but bringing quality product,” he says.

Martinez, who was born in Los Angeles, spent his childhood living in his mother’s native Guatemala. His single mother, who in the 1970s emigrated from Guatemala to the U.S., had Martinez and his younger brother live with his grandmother for some time. They eventually reunited with their mother in the U.S. once she became a legal permanent resident, after being granted amnesty under the 1986 immigration reform legislation.

They settled in South Los Angeles, with Martinez living in different cities across L.A. as an adult before buying a home in Compton in 2010, after he got married.

It was his childhood in the rural coastal region of Escuintla that Martinez learned about coffee in its fruit form while playing at his best friend’s backyard in Guatemala. He remembers how important freshwater sources were for the campesinos (farmers) and their families who live in the countryside where coffee is grown.

That’s why Martinez and his shop specialize in serving organic coffee. He gets their coffee from a distributor in Oakland.

“Organic coffee is harder to source,” he says. “I feel that it’s in line with some of the values we’re trying to practice.”

To Martinez, the coffeehouse is not meant to be a profit-making source. He says he breaks even operating Patria. His source of income comes from the coffee he roasts and sells.

Instead, Martinez says, he wants to facilitate community enrichment. Patria recently raised money for a nonprofit helping the people of Guatemala after a deadly volcano explosion. Students and professors from nearly public colleges are among his customer base. Martinez is also seeking to make connections with artists and authors.

But there are also people in the city falling on hard times, living out of their cars in parking lots. If they come into Patria, they can use their restroom, get a cup of water or ice, or even coffee if they have extra, Martinez says. He also keeps coffee drink prices affordable, between $2.30 and $4.50.