What If States Had Developed Around Watersheds? – Next City

What If States Had Developed Around Watersheds? 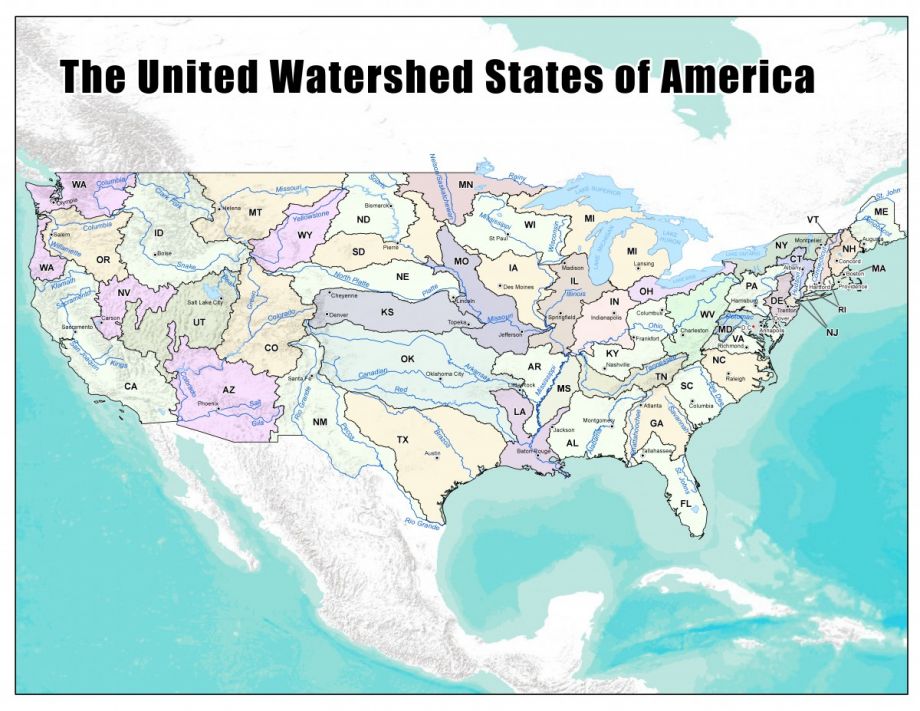 In 1869, a man named John Wesley Powell made a legendary journey down the Green and Colorado rivers. Powell, a soldier, abolitionist and geologist, was awed by the power of the water he saw and the way it had shaped the landscape. He also became convinced that the way many of his contemporaries sought to develop the American West for agriculture was profoundly unrealistic.

Reporting on the prospects for development in 1893, Powell famously said, “I wish to make it clear to you, there is not sufficient water to irrigate all the lands which could be irrigated, and only a small portion can be irrigated… I tell you, gentlemen, you are piling up a heritage of conflict!”

Powell’s understanding of the way water worked inspired a vision for the establishment of Western states — states that would be dictated by the topographical shape of land rather than the ruler-straight lines of political expedience. His proposed borders were drawn in accord with the region’s watersheds, on the idea that water was of central importance to human settlement.

As you can tell from looking at a map of the United States, with the regular boxes of Colorado, New Mexico and others marching westward, Powell’s ideas were not adopted. But they have more relevance than ever in a water-hungry 21st century, when his predictions about a “heritage of conflict” engendered by water have become reality. (For a recent example, witness the efforts of Waukesha, Wisc., to draw on resources from the Great Lakes watershed just a couple of miles away.)

Now John Lavey, a land use planner at the Sonoran Institute in Bozeman, Mont., has created a fascinating map that takes Powell’s vision even further, extending it to the whole of the continental U.S. Lavey’s “United (Watershed) States of America,” explores this question: What if all the states were configured around principal watersheds?

As Lavey writes in a post on the Community Builders website, the map raises all sorts of questions about the way we have developed our population centers:

If states were organized around watershed and the idea that water should be used efficiently, then that conservation ethic could also have taken root in the way places were built. Recognizing that it is both fiscally unwise and squandering of agricultural/open space, towns may have grown up with a more compact, mixed use form because of their performance relative to those two benchmarks.

Lavey says that such a division of governance would not have prohibited the explosive population growth out West, but it might have shaped it in a radically different way. “Humans, and maybe particularly Americans, are very entrepreneurial and capitalistic,” Lavey says in an interview. “They will use resources, sometimes to extinction, but sometimes very efficiently.” While present-day Phoenix might never have existed under a Powell-style development, “a very large Grand Junction” might have arisen instead.

As it is today, the Colorado River serves seven states and 30 million people. Water transported from the western side of the Continental Divide is a major source for the city of Denver and the sprawling suburbs of Colorado’s Front Range. “Would we be doing that if Powell had his way?” Lavey asks.

When I looked at Lavey’s map, I started to wonder if, had the U.S. developed around watersheds, we might have a completely different attitude toward water. As it is, many of us have no idea where our water comes from.

Then I thought of this: What if we could foster awareness of the provenance of our water as we are beginning to do about our food sources? What if there were a locavore-type movement focused on water?