What If All Community Development Started with Local Arts and Culture? – Next City

What If All Community Development Started with Local Arts and Culture? 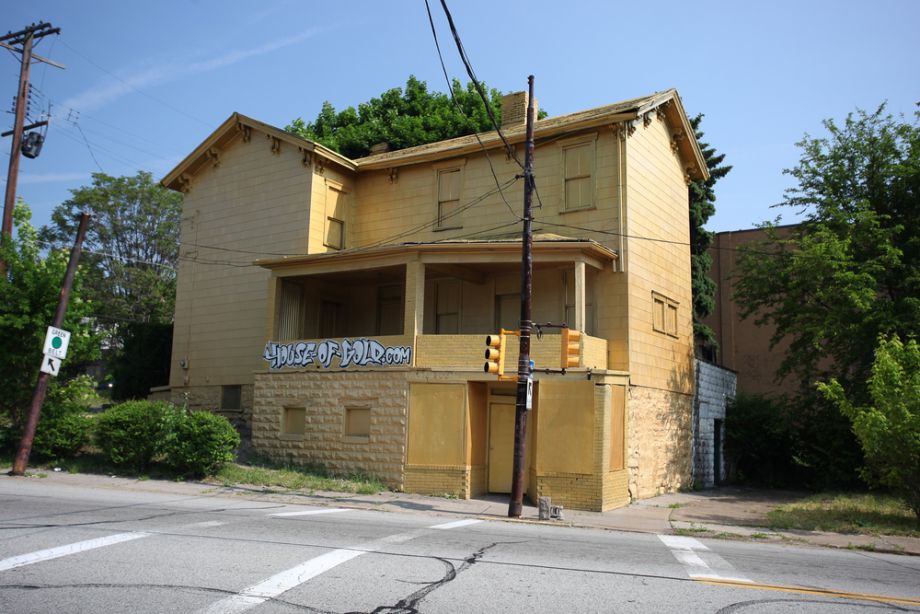 The House of Gold before its “gentle demolition.” (Photo by Dee Briggs)

Dee Briggs was expecting to do a routine demolition when she bought the vacant house next to her art studio in Wilkinsburg, Pa.

But when Briggs walked inside for the first time, she found a bunch of personal effects left behind by the families that had lived there before it was abandoned. It got her thinking about the long series of lives that had moved through and past the house since it was built in the 1870s, she says, and a normal, quick demolition soon seemed inappropriate.

So instead of simply tearing the house down, Briggs enlisted a group of neighbors to paint it solid gold and later launched a Kickstarter campaign to fund a “gentle demolition,” taking the building apart as carefully as it had been constructed. Now, years later, she’s using some of the former materials from the house to build a new coffee shop across the street. She hopes it will be a place that will bring people together and provide jobs for young people, something that will “add to the economic and social agency of my existing neighbors,” Briggs says.

At the time Briggs created the House of Gold, the term “creative placemaking” wasn’t in her lexicon, and she wasn’t trying to accomplish anything specific, says Briggs, a sculptor, and trained architect.

“It was more of a feeling, a sense of responsibility to the neighborhood, to the property, and to the history of the neighborhood [rather] than having a particular goal or intention,” Briggs says.

But creative placemaking is the label the project earned, according to a new report from the Center for Community Progress and Metris Arts Consulting. The report, “Creative Placemaking on Vacant Properties: Lessons Learned from Four Cities,” highlights creative placemaking work focused on reactivating vacant spaces in Wilkinsburg; Kalamazoo, Mich.; Newburgh, N.Y.; and Macon, Ga. It documents initiatives in each city that used arts and culture as a vehicle to remake vacant properties in ways that also model inclusive community development.

“All the communities we visited want to reduce the negative impacts of vacant property, and a variety of community members, such as artists, community-based organizations, and city staff, see creative placemaking as one tool to help make that happen,” the report says. “The broader aims of each community — economic revitalization, affordable housing, or increased public safety — influence the kinds of creative placemaking activities communities engage in, but communities ultimately want to eliminate entrenched, systemic vacancy.”

In Wilkinsburg, according to the report, around one in five properties is vacant, with nearly 40 percent vacancy in the business district. The town, which borders Pittsburgh, has a population of 16,000 — half what it was in the mid-20th century — and a median household income of $28,000. Two-thirds of its residents are African-American.

“The central core of Wilkinsburg has so many vacant properties it doesn’t look like any place where people would want to live,” says Tracey Evans, executive director of the Wilkinsburg Community Development Corporation.

Partnering with students from Carnegie Mellon University and the Wilkinsburg Historical Society, Wilkinsburg Community Development Corporation helped coordinate a Vacant Home Tour, partly inspired by the story of Briggs’ House of Gold project. The tour highlighted information about property histories and included a workshop where people could learn about acquiring vacant property through city programs. In the second year of the tour, the report says, the experience included recently completed rehabs to give attendees a sense of the possibilities. That tour inspired an upcoming tour of “sacred spaces” in the community.

“I think that activating a space in the short term to help improve the perception and the look of a community, to make it more welcoming, is incredibly important for us,” says Evans.

There’s a lot about the Wilkinsburg community that people want to preserve, Evans says, like the diversity of people and of architecture. But there’s a lot of vacancy, too, she says, “and we don’t want to keep that.”

The projects highlighted in the new report emphasize cooperative processes as much as project outcomes, says Rachel Engh, a researcher/planner for Metris Arts Consulting.

“In addition to including the community throughout a project, the community then sees that as a normal practice or an expectation,” Engh says. “So when the community continues to change, as all communities do — and maybe that change includes outside developers wanting to come in — there’s already that expectation on the ground that this is how we do the work.”

Wilkinsburg needs outside investment if it’s going to be improved, Briggs says, and if the creative placemaking work in Wilkinsburg can generate more interest from outside investors, she hopes it comes from investors who reflect its population.

“I’d love to see more real estate developers of color, people nationally who are African-American, to invest in Wilkinsburg,” Briggs says. “I feel that, statistically, we know that black-owned businesses and black-owned real estate companies are more invested in supporting black employees and black renters than white business owners and white landowners and white property owners.”

Danielle Lewinski, vice president and director of Michigan initiatives for the Center for Community Progress, notes that the Center for Community Progress has been working on vacant land issues since its founding in 2010. For its latest research, it turned to creative placemaking as a strategy that helps generate interest among a wide sector of communities, says Lewinski, and can be effective in improving vacant properties.

“What’s particularly exciting to me about the role of creative placemaking is it’s really not just about how to occupy a single property,” says Lewinski, “but also the process of how, and who and what matters.”

Tags: pittsburgh, placemaking, for whom by whom