What Happened When I Got Bitten By Asia’s “Urbanized Mosquito” 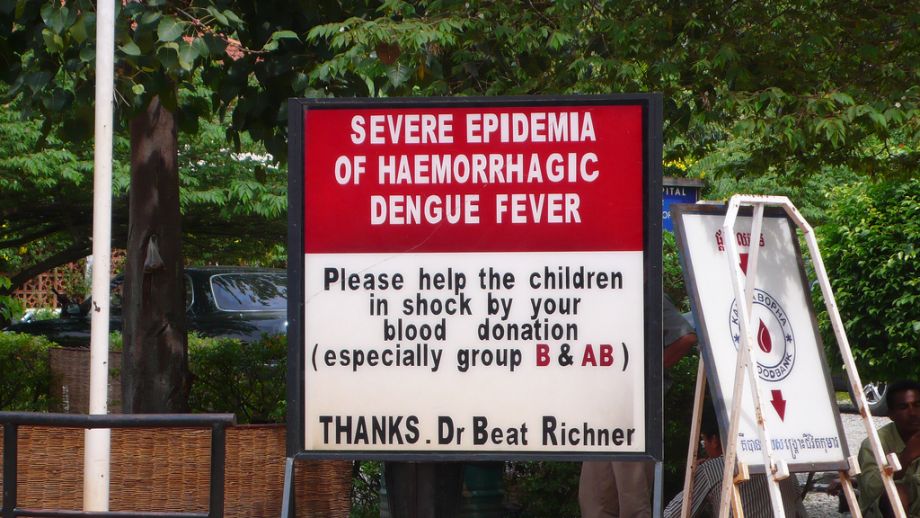 It only takes one bite. Days later, you think you have the flu: fever, headache, a churning stomach, general aches and pains. But it gets worse. Your temperature rises and your guts heave. Your skin crawls and it feels like knives are digging behind your eyes and prying open your bones. Lying in bed, shivering in the 90 degree heat while soaking my sheets with sweat, I saw my walls collapsing onto me. Bricks pummeled my writhing body and I screamed with the pain, but the bricks kept falling. When I finally had the sense and strength to get out of my apartment and visit a clinic, a doctor told me that I had dengue.

Dengue fever is a mosquito-borne tropical disease endemic to Central and South America, Sub-Saharan Africa, India and Southeast Asia. Infections range from asymptomatic, to flu-like, to dengue hemorrhagic fever – a condition characterized by profuse internal and external bleeding that can then lead to dengue shock syndrome and death. Dengue virus causes 50 to 100 million infections every year; an estimated 500,000 cases of these are severe and require hospitalizations. Approximately 2.5 percent of infected people die. There is currently no vaccine or cure for the disease, which is also commonly referred to as Breakbone Fever for the intense muscle and joint pains it causes. Symptoms generally last for two to seven days, and treatment can only be symptomatic: intravenous fluids for rehydration, paracetamol for fever and pains, and blood transfusions in the event of hemorrhaging. There are four serotypes of the virus, and being infected with one ensures lifetime immunity from that strain only. A second infection from another serotype greatly increases one’s risk of succumbing to dengue hemorrhagic fever.

The dengue virus is predominately transmitted by the Aedes aegypti mosquito. Identifiable by its distinctive black and white markings, A. aegypti is a day biter, being particularly active at dawn and dusk while generally remaining dormant at night. The mosquito, which can also carry yellow fever and chikungunya, originated in Africa. The native Aedes albopictus mosquito has also been noted as a secondary vector in Cambodia, albeit to a lesser degree.

“The Aedes aegypti is a very urbanized mosquito,” says Choon Siang Tang, a dengue specialist at the World Health Organization’s (WHO) Phnom Penh office. “It has evolved in such a way that it has become adapted to our human environment… It can feed, mate, and breed within the confines of human dwellings.”

As Cambodia urbanizes, dengue is becoming increasingly prevalent, with reported infections more than doubling between 2000 and 2010. The mosquito prefers to breed in clean, stagnant water that has collected in manmade materials such as old tires, discarded Styrofoam, water jars and plastic containers.

“In a tropical climate like Cambodia’s, it takes less than a week for an egg to become an adult mosquito,” Mr. Tang adds. “And during the day, most people generally don’t take the same precautions against mosquitoes as they do at night.”

Mosquitoes do not naturally carry the dengue virus, but contract it from biting an infected human. Because A. aegypti is a multiple biter, an entire household can easily become infected with the virus in a short amount of time.

“When it comes to vector-borne diseases in Phnom Penh, dengue is the main issue,” Mr. Tang says.

Falling numbers, however, are not necessarily indicative of a winning battle against the virus. According to WHO, dengue outbreaks are followed by periods in which the general population develops “herd immunity” from a particular serotype. When another serotype gains prevalence, new outbreaks ensue.

“These outbreaks occur in three to seven year cycles,” says Mr. Tang, who has studied the dengue virus for 15 years. “Infections increase with the onset of the rainy season in April and May and peak between June and August.”

With the virus being incurable, preventative measures have focused on stopping the A. aegypti mosquito from breeding. Cambodia’s National Dengue Control Program (NDCP), which is part of the country’s Ministry of Health, conducts educational and media campaigns to encourage people to clear stagnant water around their houses, regularly clean flower vases, discard garbage that can collect rainwater, use mosquito nets while napping during the day and cover the large earthenware jars that Cambodians commonly use to store rainwater. The NDCP also employs local volunteers to spoon larvacides into such containers.

“Even developed countries like Singapore cannot completely stop dengue,” NDCP director Dr. Ngan Chantha says. “But we can still contain outbreaks and work to drop the number of cases.”

Improving the identification and surveillance of patients is also key, with WHO reports indicating that early detection and subsequent symptomatic treatment can lower fatality rates to less than one percent. Expanding such capabilities in Cambodia, however, will be a struggle – despite the virus’ prevalence, dengue research and prevention only gets a fraction of the funding that other illnesses, such as malaria, receive. Moreover, while a dengue vaccine is currently under development, this vaccine, which may be released as soon as in the next few years, only covers three serotypes, meaning that prevention and identification will remain the best tools in fighting what has become a scourge to Southeast Asia’s cities.

Both Dr. Chantha and Mr. Tang, however, are advocating for a simpler, natural approach to dengue prevention.

“We have completed a trial project using guppy fish in water containers,” Mr. Tang says. “A pair of guppy fish can eat more than 200 mosquito larvae a day, and if you have a pair of guppy fish, they will be happily helping you to make sure there is no larvae!”

“Education is key,” Dr. Chantha adds. “When it comes to preventing dengue, we must help the people learn to help themselves.”