What Becomes of an Abandoned City Hall? – Next City

What Becomes of an Abandoned City Hall? 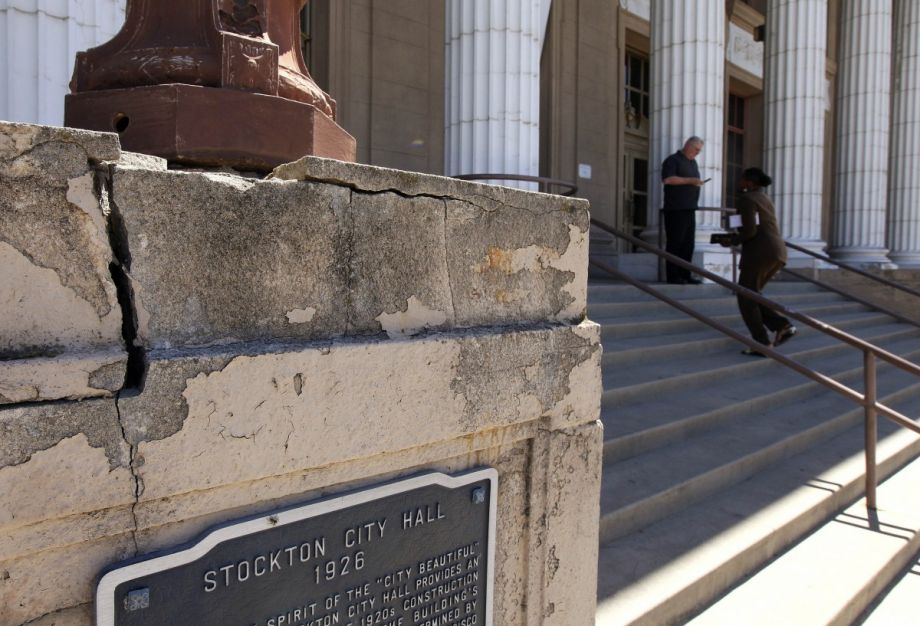 As officials in Stockton, California, prepare to move out of their current City Hall, they want residents’ help in deciding the fate of the historic, but crumbling, building.

The El Dorado Street property where City Hall is currently located is defined by an elegant row of white columns. Unfortunately, “many of the building materials used in the 1926 construction are now known to be hazardous,” Stockton City Manager Kurt Wilson wrote in a recent op-ed for The Record. “In addition to triggering ADA accessibility and seismic retrofit requirements, repairing the building would disrupt the dormant condition of those materials, requiring extensive, and expensive, mitigation efforts.”

City officials are in the process of moving to a building on Main Street, according to the city manager. With that in mind, the city wants to hear from residents about what should be done with the current City Hall, which will be preserved but, obviously, has some constraints. The building was once a courthouse and police department, complete with a holding cell and gun room.

“Should it be public or private, office or residential, museum or something completely different?” Wilson asked.

The move to Main Street may be underway, but the timeline isn’t clear, according to a report from The Record.

In 2012, the city of Stockton filed for bankruptcy. The subprime mortgage crisis “had gutted the city and it was leading the nation in foreclosures,” Susie Cagle reported for Next City in 2014. As tax revenue dried up, the city quickly went into the red, soon owing $152 million to the state pension fund. In 2006, officials tried to make up the difference with an offer from Lehman Brothers (which would itself go bankrupt in 2008) for $152 million in fixed-rate bonds. The offer (unsurprisingly in hindsight) didn’t work out too well, and the city was unable to make up its debt.

The move to the Main Street building, which is owned by creditor Assured Guaranty, was part of the city’s 2015 settlement plan, The Record reports. The city had purchased the building in 2007 for $35 million, but that property was “among the casualties of bankruptcy,” according to the paper.

About 160 city employees, including the entire IT department, currently work at the Main Street property. But the city hasn’t yet begun construction on chambers for city council meetings or a place for residents to pay utility bills. Wilson, the city manager, told the paper that work has not yet begun because bidders’ estimates have been higher than the city anticipated. And officials are apparently having a difficult time with those costs because they know the Main Street property is only a temporary solution.

“We don’t want to spend a lot of money … at a place where we don’t control the future,” Wilson told the paper, which adds that he “did not deny the possibility the city is exploring other options.”

Stockton is certainly not alone in its struggles with a beautiful, but aging, historic City Hall. As Next City covered earlier in August, San Antonio is planning a makeover of its stone City Hall with ADA accessibility in mind. The building is currently technically ADA accessible, but a visitor in a wheelchair would have to go around to the back of the building, take the ramp to the basement, find someone to help them open the door, enter an elevator and then take that to the main floor.