What Americans Don’t Understand About Donating Their Used Clothes 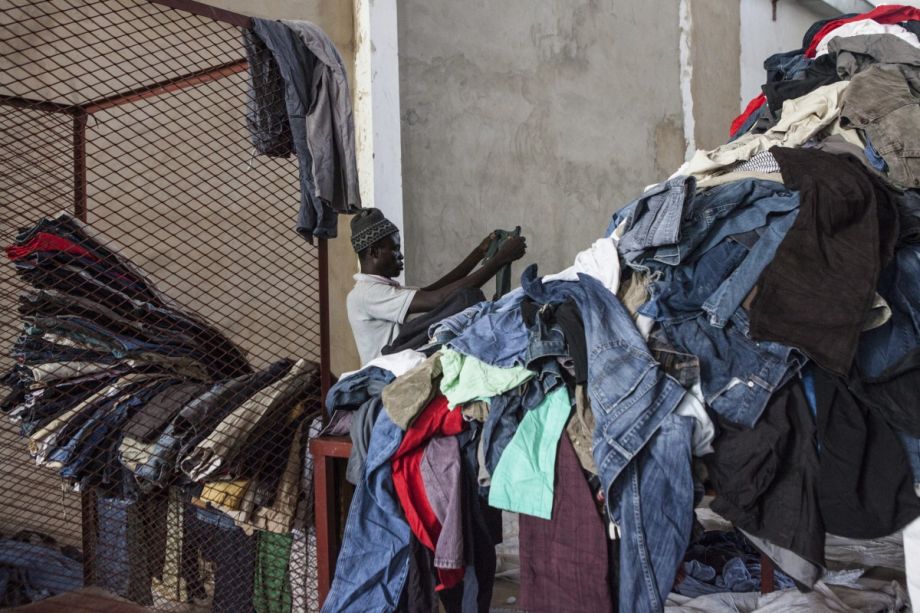 In this photo taken Monday, Oct. 24, 2016, Dame Sall, sorts and folds secondhand jeans imported from Italy at the the Invotex warehouse in Dakar, Senegal. Secondhand T-shirts, jeans and dresses are piled high for blocks along the busy streets in Dakar's Colobane neighborhood, where people buy donated European and American fashions at a fraction of their original price. (AP Photo/Jane Hahn)

EDITOR’S NOTE: The following is excerpted from “Secondhand: Travels in the New Global Garage Sale,” by Adam Minter, published by Bloomsbury. In this excerpt, Minter explores what happens to secondhand clothes. You may already know that much of what is donated to a thrift store in the U.S. is not sold in the U.S. But where does it go after that? Much of it is exported to other countries. After that, what happens might surprise you.

Wide avenues cross Cotonou, capital of the small West African nation of Benin. Single-story storefronts are obscured by tire tubes, automobile exhaust manifolds, mufflers, automotive wax, and other car accessories devoted to servicing the city’s thriving used-car trade. Bars with outdoor seating serve Pils, a beer made in neighboring Togo, and skewers of meat. And here and there, handfuls of stores sell new home goods like bedsheets and curtains.

Turn off one of the boulevards and the smooth, paved road usually gives way to a dry dirt one and shops and stalls selling or sorting recently imported secondhand goods. The secondhand-clothing businesses grow particularly dense in a section of town known as Missebo, on the west side of the Cotonou Canal, which cuts the city in half. Shirts, dresses, and other garments hang from fences erected around stalls or on storefronts; shoes hang loose, like fish from hooks. All around, bicycles with trailers, trucks with trailers, and men with strong backs carry fifty-five-kilogram bales of clothes down the street.

I am here with Michael Ogbonna, a fortyish Nigerian who makes his living in Cotonou’s enormous used-car markets on the east side of town. Today, however, Michael is working with me as a paid translator and fixer; two weeks earlier, Nigeria imposed new restrictions on the movement of used cars, all but halting business at the Cotonou car markets (it would pick up again a few months later).

Michael is a tall man with a round, bald head and eyes that squint as if he’s always scrutinizing a deal. … As we walk, he pulls at his shirt. “This is secondhand.” He tugs at his pants. “These are secondhand.” He takes out a Samsung phone from Verizon. “Secondhand,” he huffs. “Americans are trained. They’re trained. Something new, they get rid of the old one. Put it out for recycling, don’t even care. Give it away. Maybe a charity makes a little money for the office.” I glance down at his feet. He’s wearing a pair of new brown suede shoes. Yesterday, he was wearing a pair of old Nike running shoes. In between, I paid him.

“Why do Nigerians want secondhand?” he asks rhetorically. “Because it’s durable. The Chinese things we import? They break, wear out!”

A compact, wiry man is waving to us from his perch on a red plastic chair beside three bales of clothes. Behind him is an open warehouse door revealing dozens more bales. … He is Mr. A (he asks that I not use his name, for fear of trouble with the tax authorities), a secondhand importer, grader, and wholesaler. He assumes I’m a Western exporter of secondhand clothes and speaks to me in English.

As we settle into plastic chairs, Mr. A offers me a bottle of cold water. “I’ve been in this shop five years,” he says by way of introduction. I glance into the warehouse, where two women are carefully examining two bales of clothes amid an inventory of at least two hundred additional bales. Mr. A tells me that he purchases five shipping containers of clothing per week—when the Nigerian currency is strong. “But now less, due to the economy.”

“What kinds of clothes?”

“We are interested in importing durable clothes, not cheap ones. If someone in the West has worn something and it comes here, it’s probably durable.”

“Not everything from China is bad. Just what the Chinese send to Africa is bad. They save the good things for rich countries.”

It’s a common sentiment among secondhand-goods traders in Africa, and there’s some truth to it. China’s manufacturers long ago mastered techniques for manufacturing similar goods to sell at a profit at different price points. A fashionable shirt, one made to the quality standards expected in the United States and sold for $29.99 there, can be made for much lower quality standards (lower thread counts, for example) and can sell — profitably — for $2.99 in Cotonou. The quality of the fabric and the stitching won’t be nearly as good. But it will be new and fashionable, and for many consumers that matters more than durability.

“What about used Chinese clothes?”

“So much inferior. I don’t import it.”

Mr. A tells me that his biggest challenge is sorting the containers of clothes that he imports. The graders in North America and Europe do a good job, but he needs to do his own sort for his Nigerian customers. “A full container, I can sort it in a day and a half or two days.”

At that, he leads us to a two-story warehouse with five truck-sized doors. Inside, it’s dark and stifling. The only light comes from windows high above us, its beams falling through clothing fibers onto five-hundred-kilogram bales of used clothes imported from around the world. There are perhaps fifty men here; most are shirtless, and their faces are obscured by pantyhose wrapped around their noses to filter out the textile fibers thick in the air. They are muscular men glistening with sweat, their shoulders and arms toned from the exhausting act of digging through the weight of giant bales of clothes. As my eyes adjust, the room appears mostly black and blue, thanks to the volume of denim.

One thing is immediately obvious to me: this warehouse in Missebo is in the same business as in Goodwill’s back-of-the-store sorting areas in the U.S. Working conditions are far worse, of course. But the knowledge necessary to work here is much greater. There are no signs on the walls telling people what brands are worth sorting into which pile. Instead, the Nigerian men who toil here must have a combination of instinct and base knowledge for what makes a marketable garment in the cities, towns, and villages of West Africa.

“We are picky in Africa,” Mr. A says. “We don’t want garbage. We want fashion. We want quality. Not your garbage.”

His mouth stretches into a mean, toothy smile. “Not if they want to be paid. They learn what we will take. We are not a dump.”

That’s an opinion at odds with fashionable Western perceptions and critiques of the secondhand-clothing trade. Instead of viewing it as an exchange of goods driven by African demand, Western critics tend to view it as an exchange between the savvy and the ignorant. Take, for example, Whitney Mallett, a documentary filmmaker who wrote about the secondhand-clothing trade for the New Republic in 2015. She describes visiting a New Jersey grading plant with Michael Zweig, the plant’s manager:

By far, the most common labels here that I see are Forever 21 and H&M, fated for the cheap pile. “Nobody is stupid enough to buy Forever 21 second-hand,” notes Zweig. No one in the developed world, anyway.

Mallett’s “no one in the developed world” isn’t just bigoted. It’s blind to how much value is created when less affluent people are given the opportunity to parse the goods of the wasteful affluent. The grading warehouses of Cotonou exist because sorters and graders in the U.S. don’t know enough about Nigeria and the tastes of its consumers to sort clothes for them. That doesn’t make New Jersey’s clothing graders stupid. It just means they’re under-informed compared with their developing-world counterparts. In Cotonou, a clothing buyer doesn’t need to see a Forever 21 tag to know it’s cheap; a simple pinch of the fabric will send it to the heavily discounted pile. Somebody might, in fact, buy it; but nobody will overpay.

Adam Minter is is the author of Secondhand: Travels in the New Global Garage Sale and Junkyard Planet. He is also a columnist for Bloomberg Opinion. He lives in Petaling Jaya, Malaysia.