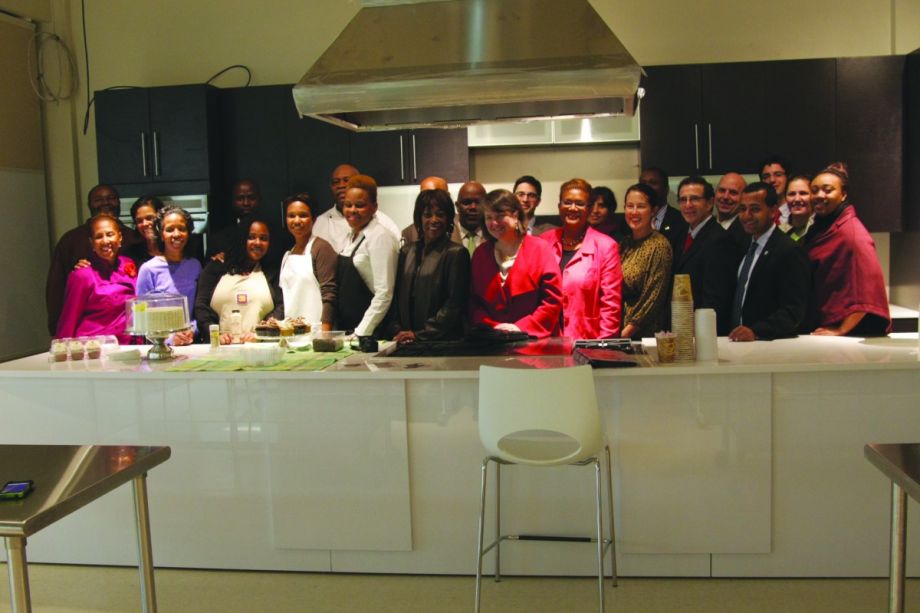 Pennsylvania and Philadelphia government officials stand in a commercial kitchen at the Center for Culinary Enterprise in Philadelphia. (Credit: USDA)

Since he was just a kid, Carl Lewis knew he wanted to be a chef. He grew up in a remote area of Jamaica, where everyone milked their own cows, raised their own chickens and goats, and grew their own herbs and vegetables. His mother first taught him about cooking and spices.

As creator and owner of 48th Street Grille in West Philadelphia, Lewis brought a few aspects of his upbringing into his first restaurant, starting of course with the food and the atmosphere.

“When I looked around the Philly area there were a lot of Jamaican restaurants but they were all take out joints,” Lewis says. “I wanted to do it right, have people coming in and sitting down, seeing all the preparation and cooking going on and experiencing the smells.”

The restaurant opened in October 2014. Its 15 staff members serve up to 65 guests indoors and up to 25 more guests outdoors when the weather is nice. Island wings are a huge seller. Curry chicken, oxtail, black tilapia too. Jerk chicken sandwiches are a favorite, of course, including a jerk chicken cheesesteak. Having also mastered French, German, Italian and even some Japanese cuisine over his nearly-four decade career as a chef, Lewis has some creative combinations up his sleeves, like a Rasta Pasta that’s also a big seller. Today’s specials: pan-seared norwegian salmon, buttermilk fried chicken or blackened rib-eye steak.

Lewis started out as a professional butler in the early 1970s, and eventually landed an apprenticeship with Intercontinental Hotels. He came to the U.S. in 1980, first to Virginia then to Philly, where he started as a banquet chef at the Downtown Marriott. Lewis worked there 24 years, rising to executive chef. He already knew it would be his last job in corporate America.

In 2012, after seven years as executive chef at Temple University Health Center and more than a few outreach phone calls from The Enterprise Center (TEC), a community and economic development organization based in West Philadelphia, Lewis decided it was time to finally visit TEC’s headquarters, inside the renovated original studios of American Bandstand.

The front entrance of the Dorrance H. Hamilton Center for Culinary Enterprises (Credit: The Enterprise Center)

In some ways, it was impeccable timing. That same year, TEC had completed the renovation of a former supermarket in the neighborhood, converting it into the Dorrance H. Hamilton Center for Culinary Enterprises. At a total cost of $6 million, the finished complex includes four production kitchens and one e-kitchen (for demonstrations and filming), available to rent on an hourly basis. Lewis regularly rents out the kitchens for his catering business. It’s quite affordable, he says. The complex also houses 48th Street Grille, as well as the soon-to-launch Common Table program from TEC.

Common Table, set to launch in the coming weeks, will allow food entrepreneurs to rotate in and out, giving them a chance test their concepts, recipes and menus before going all-in on their restaurant, food truck or catering business. For entrepreneurs of color, who typically lack the same access to family and friends capital as white entrepreneurs, it’s an invaluable resource to have in West Philadelphia as the city’s food scene continues to boom.

One of the baking kitchens inside the Center for Culinary Enterprises (Credit: The Enterprise Center)

The biggest obstacles to would-be entrepreneurs in Philadelphia are access to community and access to capital, according to Harper.

“Access to communities means having doors opened to them to various communities that are going to help their business grow and scale,” she explains.

While it’s still a challenge, TEC has figured out a lot of the access to communities piece, with industry clusters of mentors and partner organizations in food, construction, fashion and beauty, and professional services. Through their support ecosystem, TEC provided Lewis with a range of mentoring and training opportunities to help him get up to speed on running his own food business.

In Lewis’ case, the access to capital piece took two years to work itself out.

“Banks kept turning me down,” he says. And he’s not alone — in its ninth annual survey of 3,200 independent businesses, released this week, the Institute for Local Self-Reliance reports that 54 percent of minority-owned businesses reported being turned down for a bank loan in the past year (compared with one out of three overall).

It takes on average about $250,000 to open a restaurant in Philadelphia, Harper estimates. The eventual startup funds for 48th Street Grille included a $5,000 Kiva Zip loan (which got matched by a few different sources), a no-interest $15,000 loan from the Hebrew Free Loan Society of Greater Philadelphia, a $50,000 Small Business Administration loan from TEC’s Capital Corporation, a conventional bank loan and a few grants from city programs for restaurants and retail.

How high are the stakes of easing access to capital for entrepreneurs like Lewis in West Philadelphia? There are the jobs within his own restaurant, of course. There are also the careers he and others like him may help start.

Personal development is another aspect of Lewis’ upbringing that he has brought to 48th Street Grille. Just as Lewis learned from his mother and from mentors throughout his career, he makes a conscious effort to mentor and train staff as they come and go. In a high-turnover industry like the restaurant industry, it can often be both the hardest and yet the most rewarding part of the job.

“Finding qualified staff is a challenge. You bring people on board, you train them, and once they get the skill they go on somewhere else that can usually pay them better,” Lewis says.

He ballparks having gone through 40 or 50 servers at the restaurant so far. Three cooks have left since he opened, one went to college, one to a hotel job. To his best knowledge, he’s taken in at least three formerly incarcerated individuals as staff so far.

Paying it forward has long been a habit for Lewis. Throughout the course of his career, he estimates having mentored 30-50 others who have gone on to become executive chefs at other hotels and businesses. Many of his former staff or colleagues come back, sometimes just to visit the restaurant, sometimes to help out with a big catering job.

“I think the greater part of life, the rewarding part of my career, is when I can give back, when I can touch other lives and I can take young men and women of the street who are aspiring to become leaders in the culinary field and I can point them in the right direction and I can expose them to the skills and they can walk away to somewhere even better,” he says.

There’s another Carl Lewis out there somewhere. Will it take two years for him to access the capital he needs too?