Welcome to Chattanooga – Next City 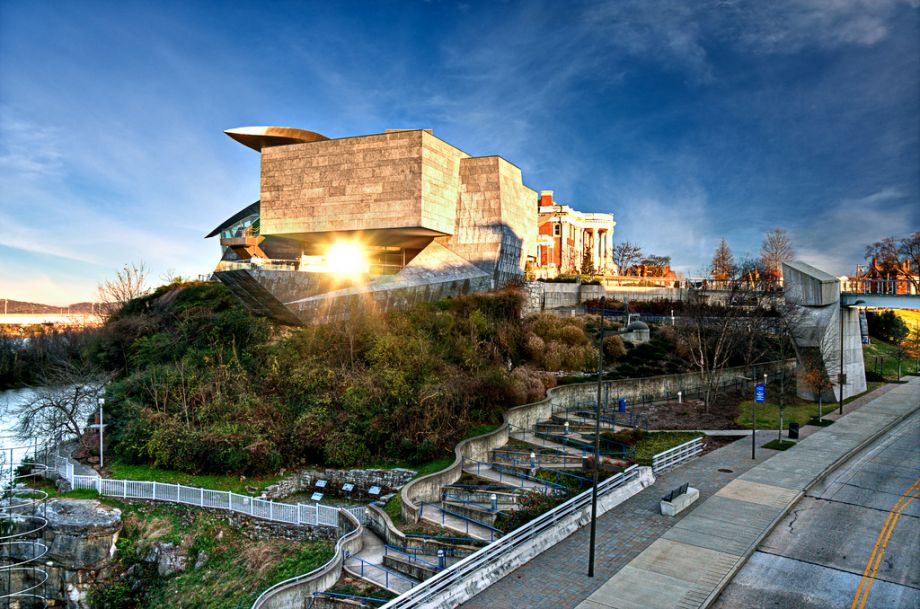 The Hunter Museum in Chattanooga

We’re in Chattanooga this week for our annual Vanguard conference. You might be asking yourself why Chattanooga and not one a larger city or one closer to our roots in the gritty Northeast.

Well, let’s be clear, the sun was part of it. Chattanooga, also known as Scenic City, is verdant and lovely this time of year, a breezy respite from the forever not-quite-spring the East Coast seems to be indulging. But there’s more than that. The south is undergoing a kind of urban revival at the moment and we wanted to be there to see it. Cities from Nashville to Savannah to New Orleans and Atlanta have seen an uptick in residents who want to ditch their cars and live a more, well, urban life. (Call it a revival, if you must.) Chattanooga is part of the movement, and that’s why we felt it was the perfect destination for our annual gathering of America’s brightest thinkers on what makes cities tick.

As Thomas Wheatley aptly put it in this week’s Forefront, “Chattanooga is in the midst of a boom.”

So why all the love for a medium-sized city that bands used to routinely skip on their way from Atlanta to Nashville? One reason is the simple math of opportunity.

“In Chattanooga you can be a big fish in a small pond,” Jim Russell, a Richmond, Va.-based geographer who writes about migration, told Wheatley. “I saw there was major ambition in Chattanooga. Because Chattanooga was open, small, actively revitalizing, it created opportunities that you’d have in no way in Boston or the Mission District in San Francisco.”

Add that to a progressive new mayor, a resurgent manufacturing sector and nascent tech economy and you can see why roughly 17,000 people moved to Chattanooga between 2007 and 2011. Despite what trend stories in magazines and newspapers might be telling you, everything isn’t happening in California and along the northeast corridor. Here, Wheatley sums up the transformation happening broadly across the south.

What Austin, Atlanta and Chattanooga have in common is a recent history of massive investment in their respective urban cores. In Atlanta, millions of dollars in public and private cash has been spent building bike lanes and more walkable streetscapes, as well as turning abandoned rail corridors surrounding the urban core into the Atlanta Beltline, an award-winning $4.3 billion loop of parks, trails and transit surrounded by mixed-used development. Since the late 1990s, Austin has marketed its homegrown musical culture and, like Chattanooga, turned its waterfront into a popular public space.

Smart city planning, good use of public space, job opportunities and a walkable downtown? That’s why we picked Chattanooga.