We Still Mostly Use Amtrak for Shorter Trips, Report Says – Next City

We Still Mostly Use Amtrak for Shorter Trips, Report Says 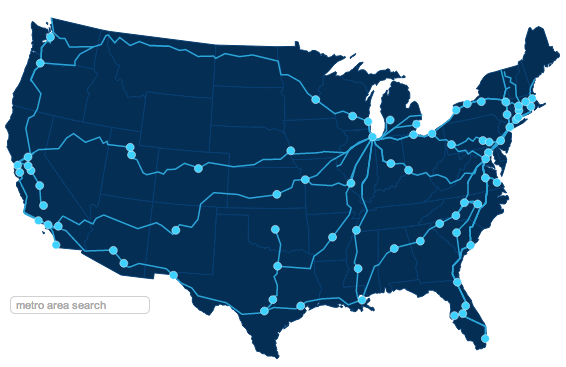 Despite the frequent threat of budget cuts from Republicans in Washington, Amtrak has enjoyed a pretty successful recent history. Ridership has increased by almost 50 percent since 2000, topping 31 million passengers last year, the highest since the service began in 1971. And the numbers are likely to increase: Nine out of the last 10 years, Amtrak has set ridership records.

But these promising stats are mostly due to shorter trips taken on a few well-knit routes, according to a Brookings Institution report released today. Furthermore, the less-traveled longer voyages cause Amtrak to lose a lot more money than the shorter trips make.

Defining “short-distance” as spanning less than 400 miles, Brookings researchers Robert Puentes, Adie Tomer and Joseph Kane find that more than 80 percent of Amtrak passengers use the service for shorter rides, accounting for a $47 million operating surplus in 2011. Yet trips covering more than 400 miles, which cost more to complete and carry fewer passengers, wound up losing Amtrak $614 million the same year.

A look at an interactive map accompanying the report helps put this in perspective. The most traveled Amtrak route is, expectedly, the Northeast Regional line. Connecting Boston to Virginia Beach, Va. and hitting every major coastal city between, the Northeast Regional is the busiest passenger rail line in the country, with more than 8 million riders annually.

Only six other routes had passenger counts into the millions last year: The Acela Express (which runs along the same corridor); the Pacific Surfliner in Southern California; the Capital Corridor Service in Northern Cali; the Keystone Service from New York City to Harrisburg, Pa.; Central California’s San Joaquin Service; and the Empire Service from New York to Albany.

As you can see, all of the most popular Amtrak lines are found on the East or West coasts. And as the report makes clear, 10 major metropolitan areas are responsible for nearly two-thirds of the service’s total ridership. With the exception of Chicago-Naperville-Joliet, all of these metros are on the coasts. Among those on the East Coast, none are farther south than Washington, D.C.

Away from these, where major cities tend to be much farther apart from one another, ridership drops off, often dramatically. Even lines reaching out from Chicago rarely break 600,000 passengers. But these can still lean toward the expensive side: The Empire Builder, Southwest Chief and California Zephyr routes each cost more than $110 million a year to operate, and only moved a combined total of 1.3 million people last year.

To exploit Amtrak’s short-distance strengths and remedy its long-distance weaknesses, the report’s authors write that states ought to take a prominent, collaborative role in determining the course of passenger rail in the U.S. This includes states sharing operating costs with Amtrak for routes longer than 750 miles (in addition to typically Brookings-like suggestions such as “foster[ing] a stronger relationship between public agencies and private capital and management firms”).

Still, almost all Amtrak routes gained passengers last year. And the three metro areas that saw the greatest jump in ridership — Phoenix, Dallas and Austin, Texas — aren’t near the coasts.

The only lines that lost passengers were the Vermonter (D.C. to the Green Mountain State), the Coastal Starlight (Seattle to Los Angeles) and the Sunset Limited (L.A. to New Orleans). Which brings me to the theory that cool-sounding names lead to empty trains.