WAYS & MEANS: Another Election – Next City 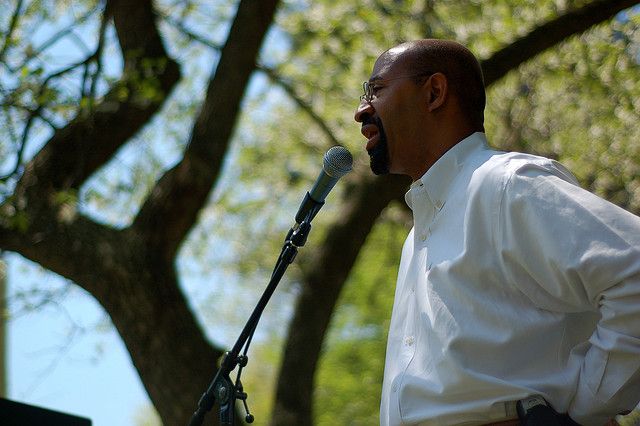 Nutter as a mayoral candidate in 2007. Credit: Flickr user Isc21

Ways & Means is a weekly column by Mark Alan Hughes on economics, politics and sustainability in Philadelphia.

It’s Election Day and we are all thinking about what makes for strong leadership. Here in Philadelphia, we have Mayor Michael Nutter to examine as a case study.

In the played-out atmosphere of the waning days of the John Street’s administration, back in 2005 and 2006, no one was talking about continuing the momentum or protecting the legacy. The mood was more about casting off the yoke of an embarrassing mayoral gang that seemed to lack the capacity even for corruption. After Street, everyone wanted to get off “pause” and hit the “play” button again.

As we all know, it was Nutter who emerged from the large and daunting field of contenders (including, for the first time in American politics, two sitting Congressmen running for mayor) to win the job. It’s a fun story that’s been told in bits and pieces: A candidate’s native skills and extroverted hustle combined with a campaign’s skillful fundraising and constituent engagement through policy.

What made Nutter the best choice in 2007 was not that he was about change or even that he was an upgrade to a mayor ready for national primetime. He was, and is those things. But that is only half of it.

I still believe now what I believed then: That the critical mission for any Philadelphia mayor is reconciling old and new Philadelphians, and the critical skill is the ability to bring both to the party.

The great thing about Nutter is not that he manifests the new Philadelphia — all Penn-educated and Twitter-capable — but that he upends the notion that there are only two ways to be a Philadelphian, the “old” way or the “new” way. He embodies that native-son, 55th-and-Larchwood thing, but he also likes to talk about green energy policy and isn’t afraid to rappel down the side of a Center City skyscraper. He proves not only that it’s possible to move past stereotypes and traditional divides, but that we should.

Nutter came into office one year before President Obama. Like his Philly predecessor, Obama was a candidate that appealed to multiple constituencies for multiple reasons. Neither an “old” Democrat nor a totally new model, Obama’s strength lies in his ability to prove that lines must be crossed and fresh coalitions be made. Does that make him the best president? Who knows. But does it make him capable of bringing many people together towards a common goal? I hope so.

Because “old” Philly is presumed to feel less swagger from having Nutter as mayor than “new” Philly, there is a building concern about Nutter’s legacy and our ability to continue his momentum. But this is a bad misjudgment. It is exactly the wrong course for “new” Philadelphians to spend the next two years making Nutter’s policies somehow irreversible by a feared successor who may return power the old ways. It’s the perfect recipe for alienating “old” Philadelphians from a legacy Nutter is making them a part of, not a threat to.

The right course of action for the next two years is for Nutter (and I predict both an easy Obama victory and that Nutter serves out every day of his mayoral term) to continue doing what we’ve all failed to appreciate fully: Keep reconciling “old” and “new” to a better future that works for us all.

The same advice can go for the country as a whole.

Mark Alan Hughes teaches at PennDesign and was policy director in the primary campaign for Michael Nutter’s 2007 mayoral race.

Mark Alan Hughes is a Distinguished Senior Fellow at PennDesign and an Investigator at the US Department Of Energy’s Energy Efficient Buildings Hub at the Philadelphia Navy Yard. He is a Faculty Fellow of the Penn Institute for Urban Research, a Senior Fellow of the Wharton School’s Initiative for Global Environmental Leadership, and a Distinguished Scholar in Residence at Penn’s Fox Leadership Program. He has been a senior fellow at the Brookings Institution, the Urban Institute, and a senior adviser at the Ford Foundation. He was the Chief Policy Adviser to Mayor Michael Nutter and the founding Director of Sustainability for the City of Philadelphia, where he led the creation of the Greenworks plan. Hughes holds a B.A. from Swarthmore and a Ph.D. from Penn, joined the Princeton faculty in 1986 at the age of 25, has taught at Penn since 1999, and is widely published in the leading academic journals of several disciplines, including Economic Geography, Urban Economics, Policy Analysis and Management, and the Journal of the American Planning Association, for which he won the National Planning Award in 1992.