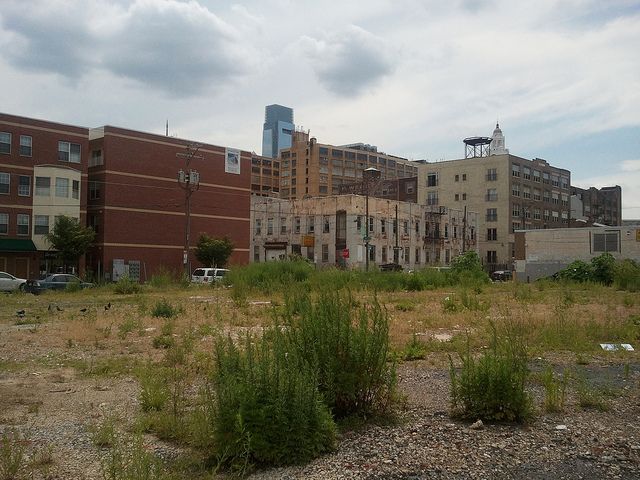 Yet too few of the people declaring Naroff’s bad idea off limits have been willing to contribute their own solutions to the relatively thin and problematic set of policy tools considered politically acceptable remedies for the city’s serious vacancy problems. This lets the city government off the hook for an unacceptable status quo that truly is not working for people living in these under-populated areas.

Even though Naroff’s prescription seems repugnant, his diagnosis of the problems presented by vacant properties is on point, particularly regarding the high cost of low density on the expenditure side of the city budget:

Lower city densities mean higher service costs. Even if only half the number of homes on a block are occupied, the city still must provide services. A police car must patrol the streets. Trash collection and snow removal still have to occur. Fires still need to be put out. The significantly smaller population requires services whose costs are not proportionally lower, driving up government expenditures dramatically.

If cities do not return to their roots as high-density locations, they will continue to stumble from one financial crisis to another. Cities cannot afford to have few people living in large areas. Services cost too much. It wastes land and exiles residents to dangerous neighborhoods, which businesses avoid.

Higher density also improves the revenue side of the ledger, as tall mixed-use buildings yield more property tax revenue per acre than shorter ones.

That’s why Naroff’s paean to industrial parks is so strange. “The suburbs, with their large open spaces, created industrial parks,” he writes. “Cities must do the same.”

If Smart Growth America’s excellent Building Better Budgets report is any guide, the North Philly rowhouses that Naroff would tear down likely yield more property tax revenue* than the suburban-style office park buildings he would replace them with.

SGA found that a three- or four-story story residential building yields a bit less property tax revenue per acre than a three-story office building. However, an industrial park developer would surely build fewer buildings per acre than what exists now, opting to waste space on setbacks and surface parking lots. Rowhouse development, meanwhile, is nice and compact, giving the city a good return per acre. 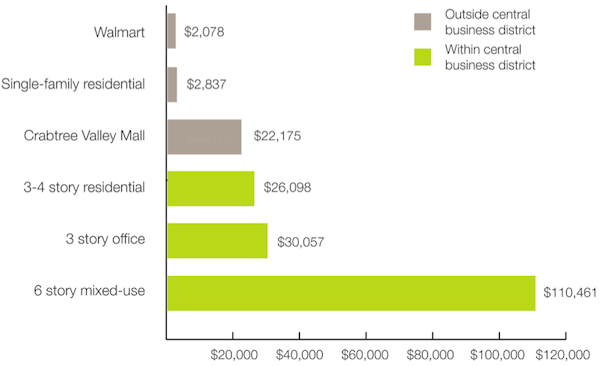 It seems odd that a well-regarded economist like Naroff would leave these costs out of his analysis, and odder still that he would fail to engage with the legacy of a similar proposal that was tried as recently as the 2000s — former mayor John Street’s Neighborhood Transformation Initiative. Curbed’s Molly Webb reminds us that NTI turned out to be extremely expensive:

The Neighborhood Transformation Initiative is a powerful example of the costs that go along with attempts to “clear-cut” struggling neighborhoods. The program’s goal was to demolish 14,000 vacant and derelict buildings. It only succeeded in demolishing about 8,000, at a cost of $181 million. The financial cost aside, the NTI required many families to leave their homes. [Emphasis in original.]

In summary, Naroff’s plan does not even make much internal sense. After correctly extolling the virtues of density, he proposes a lower-density, lower-value use for the land than what exists now. To save the city money on service provision to under-populated areas, he proposes a course of action that would likely cost much more money than the city government could hope to recover from service productivity savings in the medium term.

But perhaps the weirdest thing about the piece, as Eschaton’s Duncan Black points out, is that Naroff proposes a solution to a macro problem that Philly doesn’t have. Unlike Detroit, Philadelphia is growing, not shrinking:

[Philadelphia’s] dirty little secret is that its leaders need to start thinking a bit harder about the “problem” of this new phenomenon of population growth instead of being trapped in decline thinking. At least for the moment, the era of decline is over. That could change, of course, but it’s time to start thinking about how to deal with a growing population, something the city hasn’t had to do in a long time.

“Decline thinking” is a powerful force to be reckoned with in the debates over vacant land policy. Whenever the topic of the city’s vast land holdings comes up, officials have a tendency to talk as if all they own are worthless parcels that nobody wants.

But the reality is that the four different agencies managing the city’s land holdings also own plenty of vacant properties in growing areas where people do want to buy and develop land. But those properties aren’t being sold to interested buyers in a timely manner, or at all, due to a combination of bureaucratic incoordination and misguided gentrification mitigation strategies.

In growing neighborhoods like Point Breeze, which has a lot of privately owned vacant land, there have been political efforts to stop people from buying that vacant land or building new homes on it. There have been various political efforts to thwart more migration and even minor increases in tax base-enlarging population density in the neighborhoods that are seeing the most demand for housing.

Dealing with the first two should be pretty straightforward. City-held properties in growing areas should be auctioned off to the highest bidder, and privately owned vacant land should be taxed at higher rates.

Selling expensive land at below-market prices is a very poorly conceived gentrification mitigation scheme. City government would be better off getting the full market value for the land it owns in high-demand areas. And as Next City contributor Bill Bradley pointed out on Monday, taxing undeveloped land at a higher rate than buildings would push more real estate speculators to accept today’s prices instead of tomorrow’s, reducing rents and clearing the market for more development on underused land parcels in expensive neighborhoods.

This would be especially beneficial for the fiscal health of the transit system, since land around transit stations tends to be more expensive, and building more housing units close to transit stations would increase ridership and reduce rents.

How would this strategy reduce the volume of the third kind of vacant land parcels — the kind that sit empty because nobody wants to buy them?

Abandoning the decline mindset, and embracing growth in the areas where people really want to build and invest, will leave Philadelphia with a larger tax base to provide public services to the under-populated and distressed areas that Naroff writes about. Promoting more growth and construction in areas where property values have been rising will create more revenue for schools and police, and any resulting increases in school performance or decreases in crime rates will beget more population growth and more revenue for services.

Philadelphia doesn’t have to accept Joel Naroff’s politically obnoxious plan to shrink its way out of its vacant land problems through mass displacement. The option exists to grow its way out, but this will require overcoming the ugly politics of decline that have set in over many decades.

* Yes, this assumes perfect property tax collection, which is a highly unrealistic assumption in Philadelphia, to say the least. But this is a problem city politicians will need to fix no matter what. Arguably, the lack of an aggressive tax foreclosure policy is an important reason we see so many absentee owners getting away with letting properties fall into neglect and disrepair. If landlords had to come up with a revenue stream to pay the property taxes, they’d maintain their properties to rentable standards, or sell them to someone who will. Since they know they’ll get away with delinquency, there’s no rush to repair and rent them.