From the Watts Rebellion to George Floyd, South Los Angeles Charts a New Path Toward Racial Justice – Next City 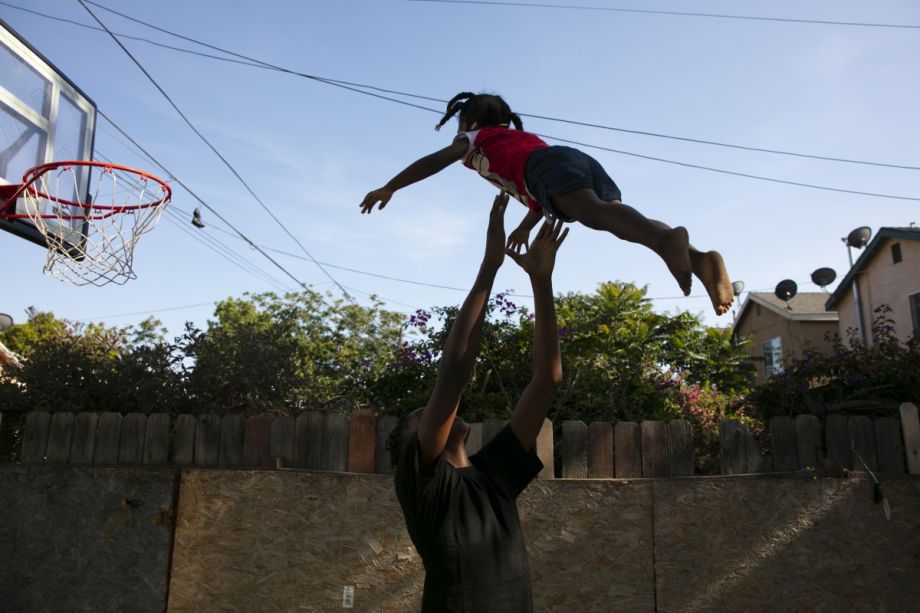 James Posey III, 14, tosses a neighbor's kid in the air while playing with her in the Watts neighborhood of Los Angeles, Monday, June 15, 2020. (AP Photo/Jae C. Hong)

For those who grew up in South Los Angeles, the remnants of rebellion are etched in collective memory. One generation was shaped by 1965, and the next by 1992. Now we confront 2020, alongside the rest of the nation, with knowing familiarity. But this time feels different—and it is.

Some could argue that few dents have been made against these inequities in the decades since. And on the surface, that might appear so. South Los Angeles still faces high poverty rates, high unemployment, high housing costs, and economic exclusion—making the community one of Los Angeles’ hardest hit areas amid COVID-19. Today, South Los Angeles residents are part of the nation’s broader reckoning with racial injustice, all the while fighting concurrent battles at home to preserve their Black commercial districts, businesses, and culture amid quickening economic devastation and gentrification.

Yet over the past 55 years, South Los Angeles has fostered a legacy that is just as unyielding as persistent inequity: a collective tradition of community-based organizing and neighborhood mobilization in the face of disinvestment. It is this tradition that will help make 2020 different.

In the decades since the Watts Rebellion, South Los Angeles residents built far more than was ever burned down—most critically, through the slow and labor-intensive process of community organizing to meet the needs of Black and Latino residents when no one else would. This block-by-block organizing, which rarely makes headlines, fostered a network of civic organizations dedicated to providing housing, food, and employment to residents, and has birthed civic leaders who are committed to racial justice at the local, state, and federal levels.

Yet for much of the last half-century, these organizations mobilized for justice without significant outside support. The public and private sector replicated legacies of disinvestment, putting the burden on South LA to “fix” their own neighborhood, rather than acknowledging generations of state-sanctioned structural racism that shaped its conditions.

Just prior to June’s racial unrest, South LA community organizations were forging a different path forward. They brought together city, regional, and state decisionmakers to co-create a recovery action plan for South Los Angeles — one that would not only addressing the persistent inequities of high unemployment, racial wealth gaps, and deteriorating housing conditions that endanger South LA residents amid COVID-19, but that advances the systemic, multisector community investments needed to promote safety, holistic well-being, and pathways to economic opportunity for generations to come.

The organizing and strategies behind South LA’s recovery action plan are not new—they are the result of ingenuity and resilience built over the last half-century. What is new is that city, regional, and state leaders can no longer afford to ignore its demands. The collaborative plan distills decades of community-led organizing in the face of public and private sector abandonment into an actionable plan that all sectors must take responsibility for. Its framework, documented in our new Brookings Institution’s Bass Center for Transformative Placemaking report, provide steps that cities across the nation can follow to prioritize recovery efforts in places facing disproportionate structural harm.

South LA’s path forward strives to achieve economic justice for Black and Latinx residents, recognizing that poverty— and particularly the spatialized concentration of poverty— is an inherent tool of structural racism. To preserve South LA’s historically Black districts, the plan supports the strategic acquisition of commercial and industrial properties for community control, expands funding for placemaking and legacy business development, and facilitates technical assistance and access to capital for employee-ownership in Black commercial districts. To support Black and Latinx-owned businesses, it funds resiliency capital for underbanked businesses, establishes partnerships to prioritize minority-owned local businesses in procurement opportunities with regional institutions, and expands support for ‘small business’ to include entrepreneurs in the informal economy—recognizing the critical community importance of street vendors, swap meets, and gig economy workers in South LA. To promote economic opportunity, it creates training, apprenticeship, and workforce incubation programs to connect residents to infrastructure and emerging industry jobs, partners with public agencies and workforce programs to recruit residents for jobs, and provides direct cash assistance for people left out of city, state, and federal aid. As an inclusive economic development plan, it is a critical step to ensuring that South LA residents have the jobs, financial stability, and resources needed to fight for further justice.

In 1965, the federal government responded to the Watts Rebellion by devoting more resources to policing South Los Angeles, rather than investing in affordable housing and pathways to employment. The McCone Commission ascribed the Rebellion’s causes not to structural racism, but to the “deficiencies” of Black people, furthering the cycle of disinvestment in the neighborhood. In the years since, the public sector has continued to neglect South Los Angeles. Even as private sector investment increased, inequities have only worsened for Black and Brown residents, who remain excluded from improving neighborhood conditions.

This moment demands a different response. Community-based organizations have stepped up, with an understanding of their power, to co-create pathways to opportunity in South Los Angeles when the government has not. And they have forged a plan toward large, systemic, multisector community investments in this fraught moment. It’s time for public and private sector leaders to support these efforts—not only with resources and partnerships, but with a firm, explicit commitment to eradicating the systemic racism, police violence, and legacies of segregation and disinvestment in which they have long been complicit.

Hanna Love is a Senior Research Analyst at the Brookings Institution's Bass Center for Transformative Placemaking.