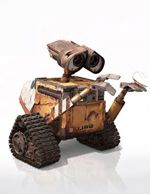 At its core, WALL-E is a love story between an autonomous, trash-compacting robot and what appears to be some advanced incarnation of an i-Pod, capable of both mass destruction and the detection of organic life forms. But for an animated feature branded with the Disney logo, WALL-E contains a surprising and refreshing level of social commentary about the consequences of consumer culture, issuing a stark, albeit cartoonish, warning to a captive younger audience.

From the outset of this latest collaboration between Pixar studios and Disney, no signs of human life remain on the scorched planet Earth, save for the discarded detritus of rampant material consumption. Our hero, the industrious WALL-E (Waste Allocation Load Lifter Earth-class), spends his daylight hours sorting through endless mounds of waste, leaving behind neat cubes of compressed garbage in breathtaking stacks that rival the brick-and-mortar skyscrapers nearby.

As WALL-E traverses the barren veins of an anonymous post-human cityscape, it becomes clear through a dull and hazy palette that the planet has been uninhabited for quite some time. What has remained is the ubiquitous “BnL” logo, the standard of the big-box mega-conglomerate Buy ‘n Large. Massive retail outlets, undoubted nods to Wal-Mart Supercenters, sit empty alongside abandoned cars, cracked highways and the wiry tangles of an infrastructure left in ruin – all of which, naturally, is covered in garbage.

WALL-E has the charming curiosity of a child, greeting each new discovery in his ceaseless task with fleeting joy and wonder. Through his perspective, the objects that once held great value to humans must now pass the tests of utility and uniqueness. The crowd chuckles as WALL-E tosses a diamond ring away in favor of its box, salvaging the more useful object for his personal collection. With no humans to assign monetary values to material goods, nor anyone to covet finite resources, WALL-E, the last surviving robot of its kind, ultimately decides what merits preservation and what is simply junk. In this role, this simple robot, strikingly similar to Short Circuit, maintains power over the entire planet, all while being fully unaware of his position.

WALL-E’s greatest find, however, is the fragile sprouting of a small plant sheltered in an eave of debris, the first time in the film that the color green graces the screen. Enter the robot EVE (Extraterrestrial Vegetation Evaluator), whose dramatic arrival on a massive spacecraft fractures the considerable silence that molds the early sequences of the film. As it turns out, the same humans who fled the planet on Buy n Large spaceships have sent a reconnaissance robot to determine whether the planet has become habitable again. Through a series of awkward encounters between the wide-eyed WALL-E and the cold, determined EVE, a bond develops that draws them back to the exiled human race on the Buy n Large vessel “The Axiom.”

The portrayal of humans is unflattering, a representation that is Carlin-esque in its extremity and absurdity. Each individual sits in his or her own hovering recliner with a holographic screen directly in front of him or her. Without so much as lifting an arm or turning a head, the resident-passengers of the Axiom can interact, feed and entertain themselves, all from the comfort of this physical arrangement, with a wide spectrum of artificial intelligence acting as its prime facilitators. Ironically, in this ultimate stage of convenience, the level of ease with which these displaced Earthlings live makes them fully dependent on the robots and computers that have been constructed to serve them.

Beneath this façade of a comically obese and infantile human race is a drastic reordering of the social structure in which we currently live. It is the exaggerated extension of our current consumer-driven lifestyle whereby convenience and complacency have supplanted personal liberty. The residents of the Axiom are happily unaware of this arrangement, waking up only when their robotic servants attempt to prevent them from returning to Earth.

This is not typical Disney-Pixar fare. Disney, the same company that brought us 1995’s politically and historically incorrect feature Pocahontas, seems to have, at least temporarily, done away with its indifferent attitude towards its own substantial role in consumer culture. At times, it feels like WALL-E plays all too easily into the “going green” trend, successfully cashing in on an issue that has scarcely left the public’s eye. Evidence: it earned over $60 million its opening weekend.

But as the product of a billing with as much reach as the Disney-Pixar powerhouse, this film contains a number of important messages that no parent should prevent their child from receiving. As the cell phone generation ages, it has yielded to a younger group defined by a number of constraints – higher commodity prices, economic uncertainty, and endangered ecosystems. Arguments over global warming have existed for decades, but only until recently has the “green” phenomenon evolved from an activist movement to an widely accepted international crisis. The film cleverly illustrates that things previously taken for granted, even things as simple as the color green itself, will not last unless respected.

A highly enjoyable film that is unique its presentation, WALL-E demonstrates that even if consumption and capitalism make our lives easier, it certainly does not make it better, begging the question, What are we willing to sacrifice for a life defined by convenience?

Only the audience knows.