Raleigh’s Choosing Between Trains and BRT – Next City

Raleigh’s Choosing Between Trains and BRT 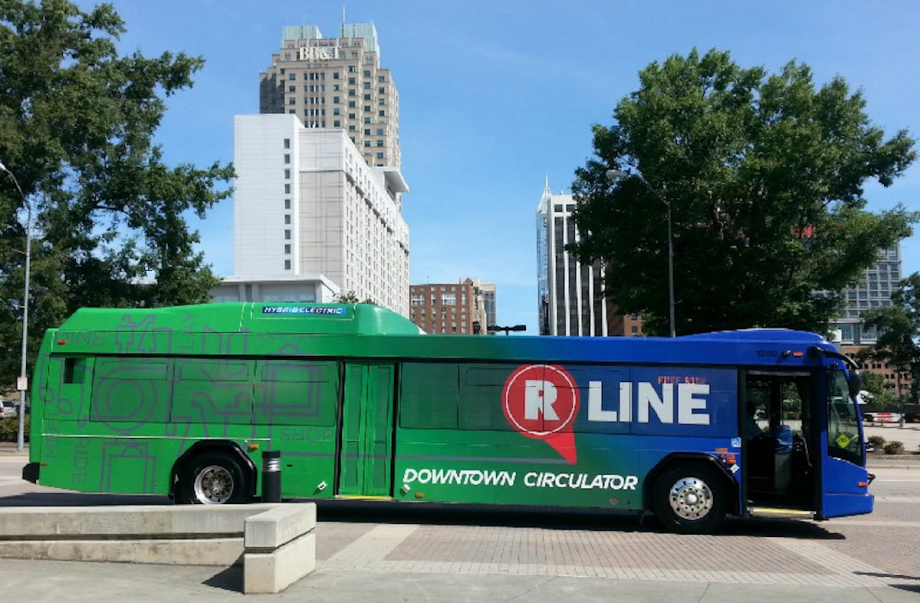 Buses or Trains? Raleigh-Area Residents Get to Choose
As the other two cities in North Carolina’s Research Triangle proceed with plans to build an electric-powered light-rail line connecting them, Raleigh, the state capital, is just beginning the process of figuring out what sort of transit improvements it wants.

Two of the four involve trains. One envisions a light-rail line with trains operating every 15 minutes from Research Triangle Park to downtown Raleigh, using the North Carolina Railroad corridor; the other would have trains running at 30-minute intervals along a CSX freight corridor from downtown northeast to the Beltline. Both routes would use diesel multiple-unit trains, electric power having been ruled out as too costly.

Wake Countians are also being asked how service improvements are to be distributed: Should the emphasis be on frequent service in heavy-ridership corridors, or should it be on providing more service all over the county, with buses running every 30 to 60 minutes from more distant points to Raleigh and Cary?

The public meetings will continue into next week, followed by a traveling roadshow throughout the summer where transit planners will make presentations to civic groups across the county. All of the feedback will be distilled into a set of final recommendations in September or October. After that, the Wake County Commissioners are expected to endorse a transit plan soon after, with a referendum on a sales tax increase to fund the plan set for 2016. If it passes, bus service improvements could begin in 2017, with the full system in place by 2026.

Chinese Firm to Build Light Metro for Karachi
Karachi, Pakistan’s former capital and largest city, will have a new light-rail transit system up and running by 2018, if things go according to plan.

A report on the railway-technology.com website states that the government of the Pakistani state of Sindh, which contains Karachi, has entered into an agreement with the Chinese firm Sinosure to construct a light-rail route called the Brown Line. The line, which will run from the Korangi Industrial Area in the south to Anda Mor Road in the north, will be 18.38 km in length, and 12.92 km of the line and 10 of its 13 stations will be elevated, 3.7 km and the other three stations will be underground, and 1.97 km at surface level.

The project’s price tag is in the neighborhood of $1.2 billion. Sinosure will float the government a loan covering 60 percent of the cost, to be repaid over 13 years, while the Sindh government will pick up the other 40 percent directly. Work is slated to begin this October and be completed by 2018.

Court Halts Work on San Francisco Trolley Loop
Ever wonder why San Francisco is such an expensive place to live? Here’s one small reason why: No infrastructure project, it seems, is ever final, and every project could run into opposition from NIMBYs armed with lawyers.

The latest project to run afoul of these folks is a trolley turnaround loop the San Francisco Municipal Transportation Agency has long planned to build in connection with the Central Subway, now under construction. The loop, which would be located near Mission Bay on the city’s central waterfront, was part of the plan approved by the city’s Public Transportation Commission in 1999, but the project got the go-ahead only after the city received a $10 million federal grant last September.

The loop’s route along 18th, 19th and Illinois streets, however, has upset some residents of Dogpatch. No, this isn’t the fictional Southern backwoods town of “Li’l Abner” fame, but rather a neglected industrial neighborhood dating to the city’s earliest years whose fortunes have turned around dramatically since Muni’s T-Third Street light-rail line began running through it.

A group of those new residents and business owners have lawyered up, and, as the San Francisco Chronicle reports, they’ve persuaded a judge to put the construction project on hold while he weighs the group’s arguments against the loop.

The group argues that the city’s environmental assessment of the site, conducted 15 years ago, is way out of date thanks to all the new apartments, condos and stores that have sprung up around it since then. It says the loop would cause noise and congestion in the neighborhood and seeks to have it relocated a few blocks south to an existing Muni storage yard. Muni contends in papers filed in the case that the loop is similar to lines found in other neighborhoods, including residential ones, and needs no further review.

The judge has ordered a temporary stay of construction issued in March to be extended. The court will accept written arguments through mid-July but has scheduled no date for issuing an opinion.