Vote for Mayor Sunshine! – Next City 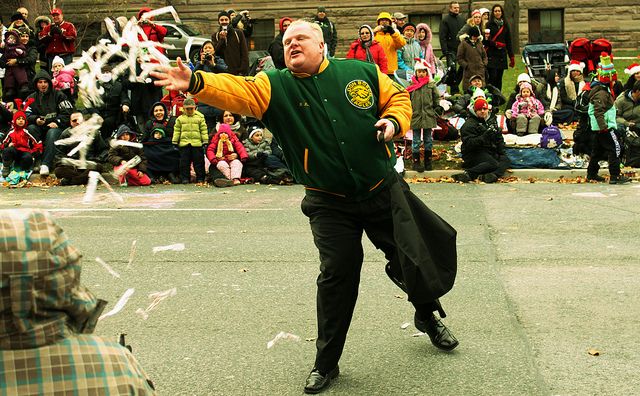 ‘Tis election day in many cities, and with it comes an awareness that for the 21st-century politician, running as the “transparency” candidate can help propel you into office. But as some mayors and would-be mayors have found, it’s a strategy not without its own complications.

While it might seem ironic now given today’s long overdue admission that he’s smoked crack cocaine, embattled Toronto Mayor Rob Ford ran on a “Respect for Taypayers” platform in 2010, one that promised transparency and accountability.

Meanwhile, in Toledo, Ohio, Mayor Mike Bell is facing a strong challenge from city councilmember D. Michael Collins. Elected in 2010, Bell, a dapper former police chief, ran on his reputation for being “straight-up direct,” but he’s been criticized for remaining tight-lipped about Chinese investors who bought the city’s Marina District. Bell was also sued by the Toledo Blade for refusing to release a map of local gang territories, partly over concerns about worrying potential investors. In a pre-election interview with the Blade, Bell said, “I’m done with the gang map. Move on.” Calling it part of Bell’s “penchant for autocratic secrecy,” the Blade endorsed Collins

Detroit Mayor Dave Bing is retiring, and the frontrunner to replace him is Republican businessman Mike Duggan. But hanging over the race is the fact that a few weeks ago the city’s chief procurement officer resigned, slamming Emergency Manager Kevyn Orr for signing $62 million in outside contracts without “transparency, fairness and good judgment.” Supporters of Orr call this the price of getting the city moving again, but Duggan has gotten caught up in it. Local activists have questioned his involvement in Michigan Gov. Rick Snyder’s push for an emergency manager, and in particular the supporting role played by a Snyder-created non-profit called the New Energy to Reinvent Diversity Fund — or NERD, which suits Snyder’s accountant background.

None of that, though, has dissuaded others from running on transparency. Montreal’s last mayor was forced to step down after being charged with fraud and corruption. Liberal Denis Coderre won this weekend while talking about “breaking the culture of secrecy” and “transparency everywhere.” Coderre has focused on the transformative power of technology and open data, telling the CBC that “smart cities bring smart citizens.”

Rebecca Williams, a policy analyst at the Sunlight Foundation, has studied this year’s races, and spots a new trend: “City-focused organizations that are actively surveying mayoral candidates on their stance on transparency issues.” Indeed, in Montreal a group called Open North ran an “I Vote with Transparency” campaign, featuring a matrix of candidate responses about whether they’d support the release of everything from proposed zoning changes to real-time snow removal data. There have also been surveys in the Twin Cities, Miami, Oakland and Tulsa, Okla.

Former Tulsa Mayor Kathy Taylor, in fact, is running again on a robust platform of civic participation. Taylor wants the city to publish more timely, user-friendly information, saying, “in the 21st Century, government transparency is about more than simply posting boring reports online.” In Providence, R.I., in a stage-setter for next year’s governor’s race, Mayor Angel Taveras is battling with state general treasurer Gina Raimondo over whether pension fund data is better on Treasury.RI.gov or Data.ProvidenceRI.gov. In Mobile, Ala., Sandy Stimpson was sworn in as mayor on Monday after running on a platform of transparency through technology, including social media. Shortly before taking office, Stimpson took to Twitter to challenge online video sensation Marcus Johns, he of nearly 3 million followers, to “a good ole fashioned Vine off.”

The meaning of openness is up for negotiation in large cities, too. In Chicago, Rahm Emanuel has been dinged for being more talk than action on openness, but he recently embraced opening the records of Divvy, the city’s new bike share program. More than accountability, Emanuel said, it’s about the city serving as “a platform for innovative tools that improve the lives of all residents.”

In New York City, Republican Joe Lhota has boasted of the Metropolitan Transportation Agency he once led as “the most transparent governmental organization of the United States of America.” The man much more likely to become mayor, Democrat Bill de Blasio, harped on openness while serving as the city’s public advocate, issuing a “Transparency Report Card” on city agencies. (The NYPD and the Housing Authority got “F” grades.) “TRANSPARENCY” earns a big red tab on de Blasio’s website, but public radio station WNYC noticed that he stopped posting voluntary information on who hosts his fundraisers around the time he pulled ahead in mid-August.

There’s a chance that the push for openness might go too far. Candidates in San Diego running to fill the void left by Bob Filner were pressed by the San Diego Union-Tribune’s “Watchdog” column to publish their college transcripts. Former assemblyman Nathan Fletcher, a 1997 graduate of California Baptist University, declined. Opponents slammed him for it. Said one: “You can’t be trusted to lead San Diego as mayor if you’re not willing to be fully transparent during this campaign.”

That struck Sara Libby, managing editor of the Voice of San Diego, as absurd. “Why not,” she wrote, “insist Fletcher release his dental records and cable bills?”