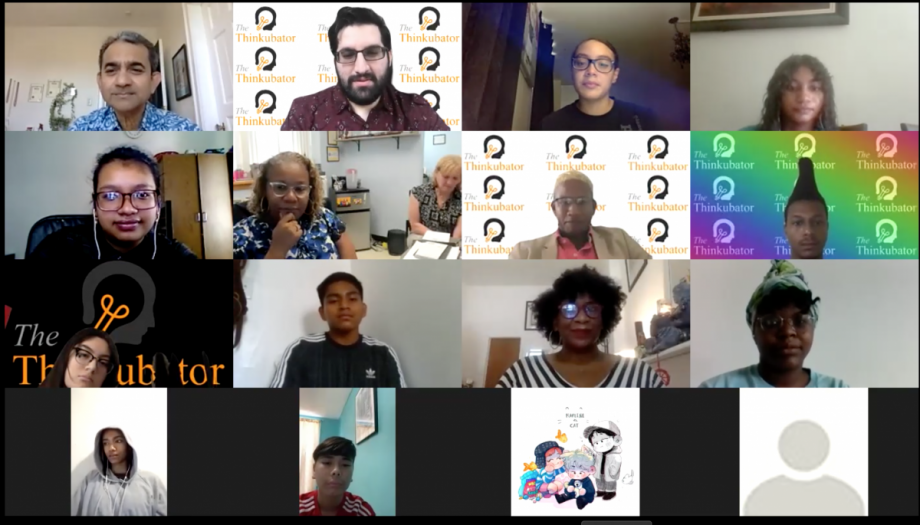 Grissmari Pinales graduated high school in the Bronx at a time of major upheaval: COVID-19 forced the end of her school year to go virtual and much of the city remained shut down over this summer. She hopes to be a teacher at a time where the future of education during the pandemic is in question.

But a virtual one-month summer internship gave her an opportunity to collaborate with members of New York City’s Department of Education on ways to improve public education. Pinales advocated for the expansion of “comfort circles,” a feature of her own high school, where students worked through their issues together in a circle as an alternative to suspension.

“Even though this internship was short, we got a lot of things done,” she says. “If the school I end up working at in the future doesn’t have comfort circles, it made me think I can bring it out as an idea.”

Pinales was one of 40 students participating in a Bronx-based internship that flipped its model in response to COVID-19 and connected students with professionals now grappling with major challenges, like reopening school and managing a restaurant. It was the first step to establishing an organization called The Thinkubator, which will continue workforce development training for Bronx youth under the guidance of a soon-to-launch youth council.

The Thinkubator started as the Bronx Private Industry Council, which Next City covered when it launched in the spring of 2019. The borough-based, employer-led entity focused on youth workforce development and addressing the gap between what Bronx employers needed from young employees and the qualifications of the local talent pipeline. Last summer, the council launched Thinkubator Solves, a training which connected youth consultants to top company leadership to address workplace challenges.

But the Private Industry Council depended on membership fees from participating employers. “In March we had about 37 businesses part of our membership … the majority had been impacted negatively by COVID-19,” according to Eddie Summers, a Bronx native tapped to launch the council. He faced the “grim reality” the council likely couldn’t sustain itself with a membership fee model since many participating businesses required face-to-face interaction.

Summers had an idea: Why not flip the model, so it’s youth led, and use private funding to invest in Thinkubator Solves, which could be easily operated as a remote summer internship? “The idea was to take pressure off businesses, as a membership-based organization, and put the pressure on us and the public sector to really think about how we train a workforce,” he says.

On June 30, the Private Industry Council disbanded. The Thinkubator was incorporated as a nonprofit on July 9, with Summers as chief executive, and its first internship launched July 13. Summers did not want to rely on public funding, as the city had just slashed funding for summer youth programs. Private financing will support the launch of the organization.

The Thinkubator recruited students from Bronx high schools, who underwent a quick application and acceptance process. “I clicked the email and saw the internship was paid, so I thought why not join?” asks Hazel Cruz, a junior at the Bronx Center for Science and Mathematics. “Especially with coronavirus, I didn’t know what I was going to do this summer.”

Summers envisioned the internship in which groups of students could virtually consult, collaborate and brainstorm with employers going through major challenges and changes. The Thinkubator paired one team of students with Legal Aid and Advocates for Children of New York to re-imagine school safety in light of national conversations around policing. The second team worked with the executive superintendent of Bronx Public Schools to re-imagine school culture in light of COVID-19. The third team worked with Rosa Garcia, owner of Mott Haven Bar and Grill.

Cruz participated in the team helping Garcia bring business back to her restaurant without the option of indoor dining. They worked on a plan to increase its social media presence through channels like Instagram Stories. Emmanuel Uzobuife, a junior interested in someday working in the healthcare business, absorbed the challenges of running a business. “My main takeaway was the amount of work that goes into running a business — it showed me the business side of anything, and tapped into something I was interested in already,” he says.

Summers’ goal, like it was with the Private Industry Council, is to introduce Bronx students to a variety of career paths. “Bronx is known as the essential borough, it holds much of the essential workforce,” he says. “We recognize it’s important to hold the essential employment and jobs, but we want young people to know they could also have a job in the knowledge economy.”

The Thinkubator also offers leadership opportunities within the organization. Summers plans to build a youth council to “amplify youth voice within the borough,” he says. “It’ll allow youth to develop their own agenda that speaks to how we run and manage our organization.” He wants to ensure young people play a pivotal role in the larger conversation of re-imagining the Bronx economy at a time that the borough has a 25 percent unemployment rate.

This fall, The Thinkubator will host 120 students with a new cohort of employers. “They don’t mind us applying again, and I’m really interested in doing it again,” says Cruz. “I don’t remember having a business program at my school, so I really enjoyed getting to learn about business and keep myself occupied this summer.”