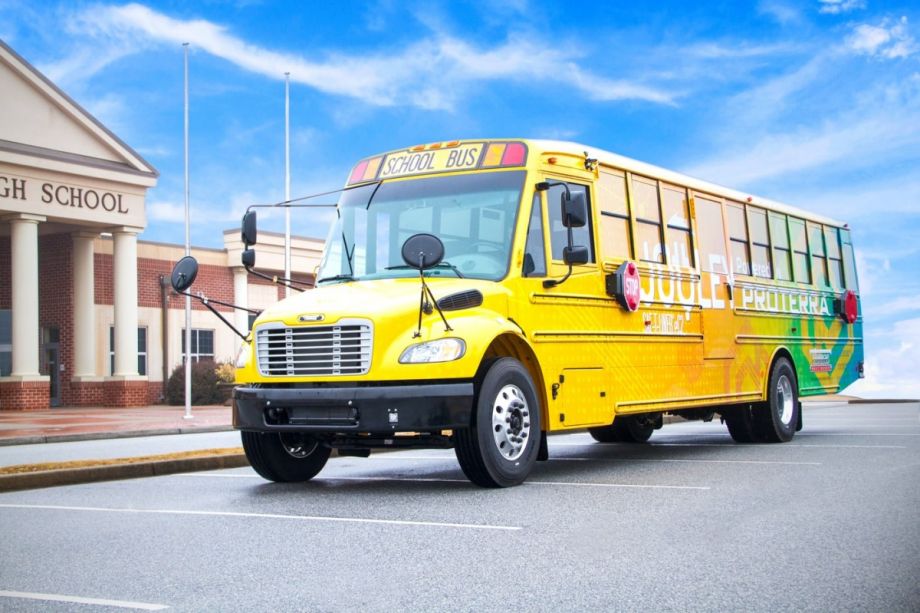 There are many good reasons for schools to transition to electric buses. At the top, for Richmond City Public Schools (RPS), is the urgency to reduce children’s exposure to diesel emissions in a city known to have some of the highest asthma rates in America. RPS is about to get four new electric school buses this year, thanks to Dominion Energy. The large utility, headquartered in Richmond, recently announced a program under which Virginia school districts will be able to buy electric vehicles at the same cost as diesel buses. Dominion Energy will make up the difference — to the tune of over $100,000 per bus — and build the charging infrastructure for the schools.

Darin Simmons, Jr., COO of RPS says, “Our primary interest is doing right by our kids. As kids wait for the diesel buses and ride them, the exposure to diesel emissions is really harmful to them.” Work is about to begin in RPS’ transportation hub on the south side of Richmond, in preparation for receiving the first two buses in August with the other two to follow in December.

By the end of this year, Dominion will put 50 school buses on the roads across 16 school districts in Virginia. “Some school districts wanted all 50 buses for themselves. But we said no, that’s not how this program will work. These buses are a grid resource at the end of the day,” says Dan Weekley, VP, innovation policy and development, Dominion Energy.

For Dominion, the biggest impetus behind the program is vehicle-to-grid (V2G) technology, which injects energy stored in electric vehicle batteries back on to the grid in times of heavy load. The buses will transport kids to and from school during the day, and at night when families turn on the TV, run their dishwashers, and cool off with air conditioning, the bus batteries will send surplus electricity back into the grid.

Electric school buses are a promising energy storage resource for this type of application. They are large commercial vehicles (so they have big batteries) and they sit idle on evenings, weekends and during hot summer months. The company expects electric buses to potentially also be a model for vehicles-to-building (V2B) technology, in which buses plug into buildings’ energy systems and operate like back-up generators.

Dominion Energy is investing $15 million to get just the first 50 buses running this year. While battery costs have been declining, the upfront costs of electric school bus systems remain high enough to be daunting for most. A 2018 law that allows utilities in Virginia to spend their excess earnings on modernizing the energy grid and transitioning to renewables — in lieu of refunding ratepayers — may be helping to fuel Dominion Energy’s plans.

“Ours is not a 50-bus program,” Weekley says. ”This will be the largest electric school bus deployment in the country.” He adds that the schools that didn’t qualify for the first phase will get priority in the next phase. By 2025, Dominion Energy plans to put 1,000 more new electric school buses in operation. During the same period, many buses will also be ready for replacement and between then and 2030, the utility is aiming to swap out old diesel buses with new electric ones.

Dominion Energy is hoping that widespread adoption of electric buses will help to drive down the prices of these vehicles —and that, in turn, will bring more of them to the grid. But the company doesn’t see a wait long before the economic benefit to business kicks in. It expects the first one thousand buses to be able to address the peak period demands of 10,000 homes. For greater efficiency, the utility is looking toward managed charging, or smart charging, that will allow it to remotely sync battery charging hours with the needs of the grid. For example, it could program the buses or send signals to them to charge at off-peak hours.

To go beyond the first 50 buses, however, Dominion Energy needs the state legislature’s approval as the expansion could result in a rate increase for customers. Weekley says the rate impact will be less than a dollar a month and could even be offset by future revenues from the V2G system.

Without a doubt, these plans have the support of school districts. While Dominion Energy is making a long-term bet on V2G and V2B technologies, the payoff for the schools will be immediate. “Operationally these new buses will help us save costs. Every dollar we can put into the classroom helps,” says Simmons.

Deepali Srivastava is a writer and editor whose articles on socio-economic and environmental issues have appeared in Forbes Asia, MSNBC.com, strategy-business.com, and Warscapes.com. She is Senior Director of Content Strategy at Global Gateway Advisors.