Video Shows Growth of Midtown Manhattan Between the 1850s and Today 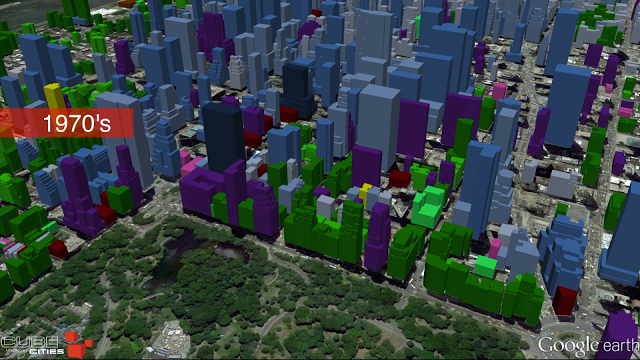 Looking for a decent way to spend a minute of your time? How about an animated history of the way Midtown Manhattan has grown over the last 160 years?

The video below, created over at the Canadian blog Cube Cities, depicts a portion of Midtown as it appeared each decade between the 1850s and today. As time goes on, buildings pop up on screen according to the year they were built.

Beyond the pretty colors and appeal to urban geekery, the video — which first appeared on Sunday and gained some traction today on New York-centric websites like Gothamist — gives viewers a good sense of when, exactly, the city underwent its many growth spurts. For much of the 19th century, for instance, development crawls and the skyline remains predominantly low-rise. As soon as the 1900s hit, however, taller buildings start shooting up all over Midtown.

You’ll recognize similar patterns throughout the 20th century. “The 1920’s was a busy decade in the history of Manhattan’s development,” writes Greg Angevine of Cube Cities. “The 1940’s and 1950’s were comparatively slow, but development leaped forward again in the 1970’s only to slow significantly in the 1990s.”

We’re looking southeast from Central Park. Notice Columbus Circle in the lower right corner and a sliver of the East River in the upper left.

Cube Cities describes itself as a “floor-level, city visualization engine” and has a whole bunch colorful videos going back to August 2012. Beginning last month, the blog has posted similar growth-over-time animations for Toronto, San Francisco, Calgary and Chicago.