Vacant Raleigh Storefront Lights Up With LGBT Statement – Next City 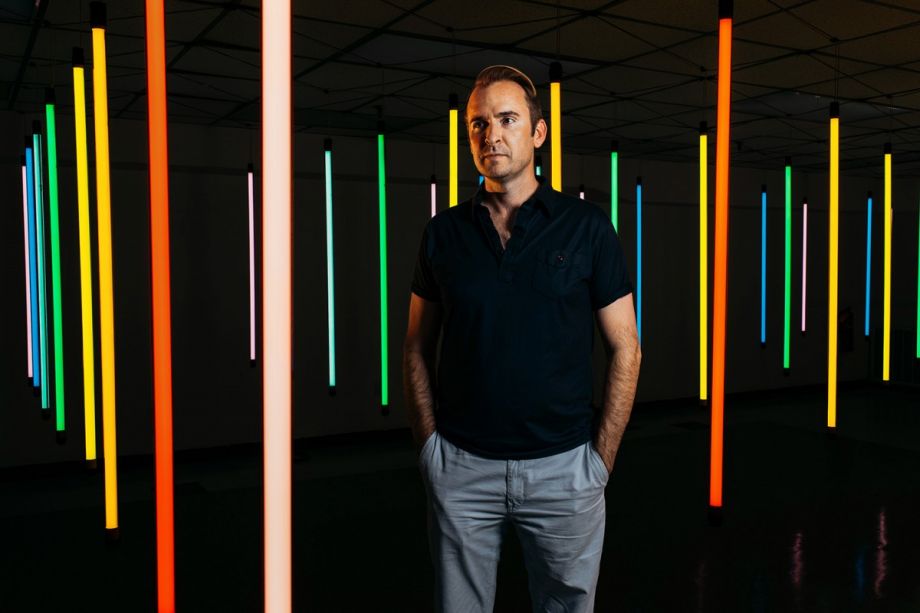 Lincoln Hancock's “Flag” is lighting up a vacant storefront in Raleigh. (Photo by Jillian Clark)

As you walk past the locked vacant storefront in downtown Raleigh, something interesting happens. Inside, 4-foot-long LEDs arranged in rows blink on and off, reacting to your movement and that of other passersby.

With enough people passing, the entire installation lights up in the colors of the rainbow flag.

Just a few blocks away from the state capitol, where lawmakers have passed or introduced increasingly discriminatory legislation against LGBT citizens, the art project is a political statement about the values many Raleigh residents hold, in opposition to that legislation.

But for the artist and the two locals who funded the project, “Flag” is also a statement about how far the city has come in just a few years.

When Pam Blondin, owner of a downtown store and half of the new arts funding organization Flight, moved to Raleigh in 1992, “[downtown] was the most depressing thing ever,” she says. “I distinctly remember it was absolutely empty. It was a Saturday. [My husband and I] looked at each other and I almost cried.” (She opened her store in 2012.)

Flight’s other co-founder, Jedidiah Gant, moved to Raleigh years later but had a similar experience.

After the city re-opened a failed pedestrian mall to auto traffic, downtown began to grow again, Gant says, but “the arts scene was still catching up … our urban setting was still kind of bland.”

Fast-forward to 2014. Blondin had raised money to build Raleigh’s first parklet, and Gant was running the Raleigh Murals Project. “We realized we had some common interests related to creative urban art,” Gant says. Around the same time, Blondin was talking to an arts administrator friend, lamenting that she could only afford to pay an artist $500 or $1,000 for their work. The friend pointed out that for many artists, $1,000 is considered a huge grant. Flight was born.

“It doesn’t take a lot of money to support artists and make cool stuff happen in the community,” Blondin says.

Then came the empty space. Blondin was introduced to the landlord through the Downtown Raleigh Alliance, the neighborhood’s BID. The new landlord was busy with other projects and wasn’t ready to start work on the vacant space.

“Raleigh’s not that big a downtown,” Blondin says. “There are maybe 10 active blocks, and [this space] is in a pretty active block. So having it vacant for a few years is something nobody was looking forward to.”

Over the holidays last year, Blondin and Gant opened a pop-up store in the space, donating partial proceeds to seed the Flight fund. This spring, they reached out to artists for proposals to activate the space and chose Lincoln Hancock, whose “Flag” will remain in the space until September.

The project pushes the boundaries in Raleigh. “Art that takes place outside a traditional gallery or museum is a little less familiar to people here,” Hancock says. “I’ve had people ask me: ‘So, this is art? That’s all it’s going to be?’ This is great, because these are people who have maybe never seen work like this, or maybe it’s changing their idea of what art can be.”

Gant and Blondin agree. They want to ensure that Flight funds “something you would walk out of your way to see,” and they see funding projects like these as a way to change the conversation about what public art in Raleigh should look like.

So far, they’re getting buy-in. “Just since we started this thing a year ago,” Blondin says, “we’ve been at the table several times with city councilors and county commissioners. It’s a catalytic thing now.”