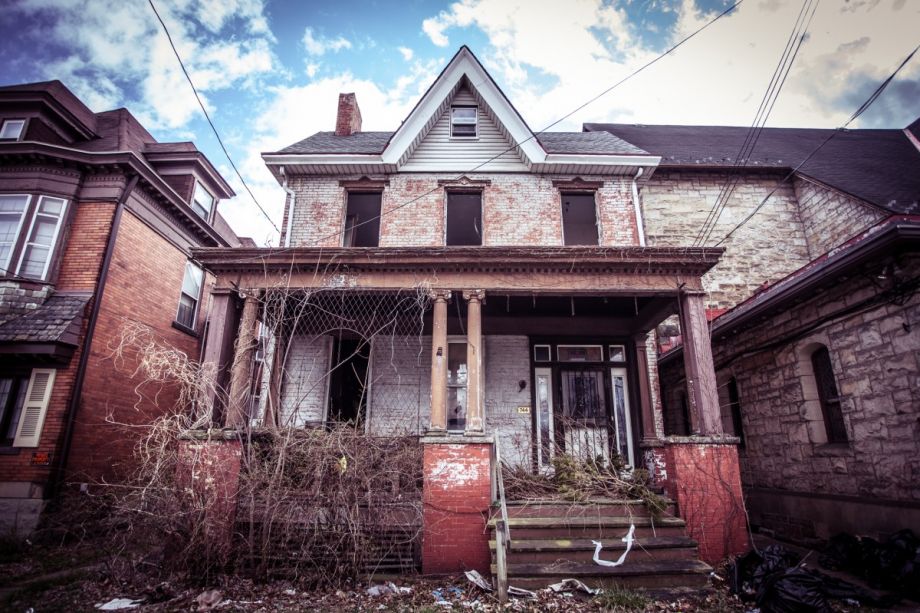 A stop on this year's Wilkinsburg Vacant Home Tour

The abandoned homes and businesses of many an American city all formed the bedrock of people’s lives once upon a time — and they could again. Reminding people of that human face behind blight is the point of the Wilkinsburg Vacant Home Tour, to be held Saturday.

Wilkinsburg was an affluent community once too. “It was mainly considered a bedroom community,” says Marie Gallagher, of the Wilkinsburg Community Development Corporation, which is sponsoring the tour. “We had a lot of engineers back in the day that worked for Westinghouse.” The famed maker of electrical equipment and appliances had a large manufacturing facility nearby that closed several decades back. (Founder George Westinghouse’s mansion was located in next-door Point Breeze.)

“Our peak population was in the 1950s, at about 31,500,” says Gallagher. The city has lost about half its residents since then and has a population of 16,000 today. “As a result we have the highest vacancy rate in our county, and maybe a larger area. It was one of the wealthiest communities in [Allegheny] County, if not the wealthiest, in the 1950s. Now it’s done a 180.”

Along with this reversal of fortune has come a decline in its reputation. Gang activity and violent crime have become associated with the borough, no doubt assisted by stories broadcast by Pittsburgh’s ABC affiliate, WTAE-TV, whose studios are there.

“One of the goals [of the tour] is shifting the perception of Wilkinsburg from what people see on the nightly news,” Gallagher says.

Students from Pittsburgh’s Carnegie Mellon University who spent time in the city gathering information from local residents to develop strategies for fighting blight offered the idea of a tour. “They came up with five different programs for fighting blight,” Gallagher says. “One was the vacant home tour. We liked that idea and thought it was something we could do.”

One of the CMU students, Kenneth Chu, decided to turn the tour from idea into reality along with the WCDC in 2015, which was his senior year. That year, the WCDC researched the histories of five vacant Wilkinsburg homes: who lived in them, what they did for a living, their contributions to the community, how their homes became vacant and what sort of future might lie ahead for the structures.

That “future” part is the tour’s other main goal. Organizers and volunteers hope to get self-guided visitors on Saturday to see the potential of the properties.

The homes on the tour come from the inventory of vacant properties the borough owns. Locals will be stationed at stops to serve as guides through each property. As they lead visitors through the home, they’ll tell stories about the people who made it and the community live and breathe.

In the tour’s first year, there was even a splash of visual verve. A local artist who exhibits regularly in New York bought one of the homes with the intent of demolishing it, but before she did, she painted it gold, researched its history and offered it as a tour stop.

To engage the community in action, there will also be workshops on acquiring and rehabilitating vacant property with reps from banks, community service organizations and government agencies. Would-be buyers can learn about the process of returning vacant buildings to active use. Gallagher says that there has already been interest expressed in buying two of the homes on this year’s tour, but they will remain vacant for a few years still because the process of buying vacant property takes more time.

Gallagher also says her organization would like to find ways to assist low-income seniors who still live in older homes like the ones on the tour with maintenance and repairs — “fighting future vacancy,” as she put it.

The tour has had a positive impact on both the community and the stock of vacant property, she says. “We hear from Allegheny County that the number of applications to purchase vacant property [in Wilkinsburg] have increased, and a local bank has also reported an increase in interest in its product that allows people to buy vacant homes and rehab them.”

A case in point from last year’s tour was a couple who was looking to move but wasn’t quite sure Wilkinsburg was where they wanted to go. “They were so inspired by the tour that they ended up buying a house here, and they live here now,” Gallagher says.

Some 600 people went on the first tour, and Gallagher expects at least that many, and most likely more, will participate this year. Photos and storyboards from that tour are available on the website.

“I think it’s had a positive effect on community pride. It fits in well with the work we’re doing and the direction we’re heading in the borough of Wilkinsburg.”