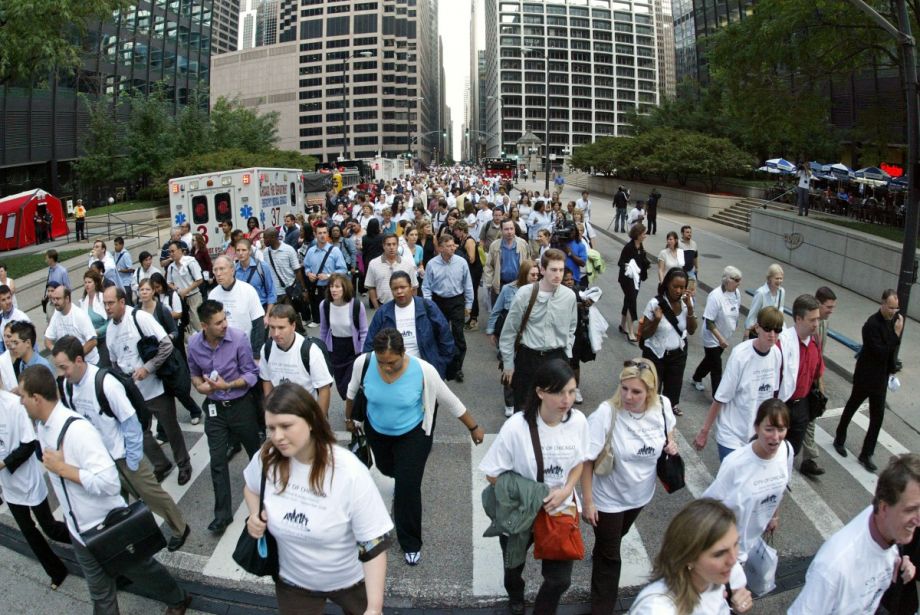 In 2006, 3,000 people participated in a mass evacuation drill in Chicago during National Preparedness Month in the U.S. (AP Photo/M. Spencer Green)

September is National Preparedness Month in the United States. The official slogan on the government website reads: “Disasters Don’t Plan Ahead. You Can.”

Despite the catchy slogan, we don’t look like a nation that was prepared.

This year during National Preparedness Month (which was started in 2004), multiple hurricanes pummeled the Atlantic basin. Hurricane Harvey struck Texas, dumping over 50 inches of rain on Houston, causing flooding and devastation of historic scale. Hurricane Irma brought a surge of destructive winds and rain to Florida, impacting Georgia, Alabama and the Carolinas. Combined damages from the hurricanes are projected to eclipse those of Hurricane Katrina, costing U.S. taxpayers an estimated $200 billion. Meanwhile, in the West, wildfires are clouding the skies with smoke and ash in Oregon, Montana and Idaho.

Yet President Donald Trump’s White House revoked an executive order on flood risk regulations just a few days before Harvey hit. And Trump is proposing budget cuts of roughly 9 percent to the federal agencies responsible for disaster prediction, response and recovery. At first glance, these cuts don’t make sense. Yet considered in the context of his open rejection of climate science (which predicts that superstorms will become more intense and more frequent), the puzzle begins to fit: Trump is still refusing to admit that we are in the beginning stages of a climate crisis.

So rather than climate change adaptation policies, we have an online tool kit, a slogan and the pretense that these marketing tools will suffice.

How do we begin to address the danger of a climate change denier as president? We can’t wait until 2020. We have to take control of the climate change conversation — and we have to do it now. We have got to start calling these devastating events what they are: impacts of climate change, not natural disasters.

The words “natural disaster” describe something unpredictable, catastrophic and unpreventable. The Greek roots of the word reference the unlucky positioning of a star. But the extreme weather events of late aren’t simply bad luck, nor were they unpredictable. Sadly, at one point they might have even been preventable.

Mathematicians and climate scientists have been warning us of the impact of CO2 emissions on the climate since the early 1960s. Scientists have been telling us what would happen if we refused to transition away from fossil fuels — describing in detail the superstorms and floods that would bring incredible destruction to coastal areas in the United States if we do not stall the rising temperature of the planet. They even told us exactly where it would happen, pinpointing coastal cities in the Southern United States — especially in Florida, Louisiana and Texas.

Why does it matter if we call these extreme weather events climate change or natural disasters? At a time when our nation is divided on so many other issues, is it worth picking a fight over words?

While I wish that we could all just agree to disagree about this, as it turns out, words do matter. And they can hurt us. They can even be deadly, standing in the way of help and protection of human rights in the wake of hurricanes, floods, fires and drought.

The language we use to describe these extreme weather events is crucial. Referring to them as “disasters” keeps us in stuck in reactive, rather than proactive, policy. If we keep thinking of these events as unpredictable, unpreventable occurrences, we will never dedicate enough resources to planning ahead for them. We will instead be forced to depend on the passage of special bills for disaster relief.

Perhaps even more importantly, we will never stop and ask ourselves, and our government, why these events are happening, and demand that we do everything possible to prevent them from happening again.

Those who control the perception of a situation ultimately control the reality of it. In policy speak, the tactic for controlling public perception of an issue with words is called “framing.” Framing is the act of describing an issue in specific terms so that people understand it in the way that you want, and ultimately react to it in the way that you want. It’s simply about choosing some words instead of others to socially construct a perceived reality.

As a politician, you know you have won the Frame Game when you determine the accepted narrative for a problem. You will know you are a master of it when your constituents don’t even realize you are playing — they just accept your frame as unquestioned reality.

Framing is a very common tactic, and isn’t inherently bad. However, a frame becomes a tool for harm if it misguides the public in an effort to absolve the government of responsibility for violence or destruction. Unfortunately, this use of framing isn’t anything new. Framing has long been used to disguise grotesque human rights abuses, marketing a version of history that is more palatable to the public — and less expensive for the government.

The framing of the impacts of climate change as natural disasters will likely prove to be one of the most successful framing campaigns of our lifetime, and surely the most impactful. The way that these tragedies are being described in official discourse is very deliberate, crafted with the precision of a literary surgeon. And the public has followed suit: Instead of “climate change” we say “disasters,” or worse yet, “weather.” Make no mistake about it: We are being sold this understanding of climate change intentionally.

Two of the industries responsible for the largest contributions to CO2 emissions are oil and gas. They both have incredibly strong, very active lobbyists at work in Washington, D.C. Big Oil invested millions of dollars in Trump’s inaugural fund, according to a Center for Public Integrity analysis of federal disclosures.

It’s time to start talking to Trump about climate change, rather than letting his administration frame our reality in a way that serves his financial interests.

We have options, and can stop damaging our planet in ways that are deadly to us. Brilliant minds are working on solutions at both large and local scale. Elon Musk has put forward a plan for a transition to renewable energy in the United States that combines rooftop solar with utility-scale solar. This plan could lead to 100 percent of power in the U.S. coming from renewable sources.

Despite being a slap in the face to people who have lost lives and livelihoods to the recent hurricanes, floods and fires, the Disaster Preparedness Month slogan got one thing right. We can plan ahead — but only if we take control of the conversation. We have to say the words. And we have to demand that our government says them too.

It’s time to stop making small talk about the weather while the world crumbles around us. Now is the time for big conversations about climate change.

It’s time to say the words.