The senior population in the U.S. is growing rapidly, but the number of older Americans paying more than half their income on rent is growing even faster, a new report finds.

According to Make Room, a national campaign advocating for affordable housing, while the overall population of seniors aged 65 or older increased by 25 percent between 2005 and 2014, from 22.5 million to 28.1 million, the number of severely rent-burdened seniors increased by 34 percent, from 1.4 million to 1.8 million. The report notes that 43 percent of these seniors struggling to pay rent are living on Social Security income alone.

Rents are rising across the U.S. — as is the rent-burdened population as a whole — but there will be no Social Security payment increase in 2016, for only the third time since 1975. Seniors make up 22 percent of Section 8 voucher recipients; senior households account for 29 percent of Low-Income Housing Tax Credit properties.

“Rising, unaffordable rents are jeopardizing older Americans’ retirement security, including the ability to stay in their homes and communities, and to afford healthcare and medicine,” said Angela Boyd, managing director of Make Room, in a statement. 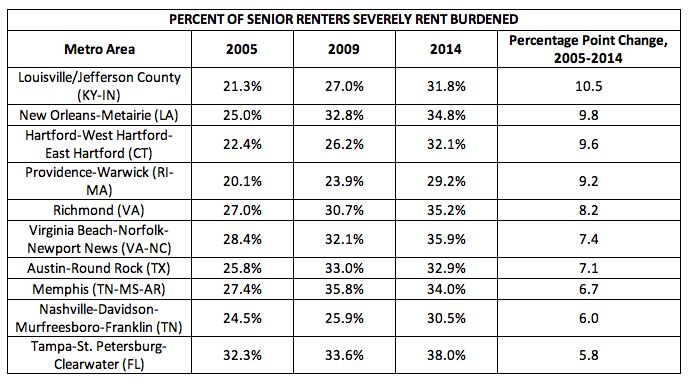 Single women with a median age of 78 account for nearly 1.1 million, or 58 percent, of households spending more than half their income on rent. Single men with a median age of 73 represent 390,000, or 21 percent. Rent-burdened seniors are more likely than other struggling renters to live in large apartment buildings: More than half of these seniors are living in buildings with 10 units or more, compared to 30 percent of all severely burdened renters.