Advocates Send Message in Washington: Bike-Share Is Bipartisan – Next City 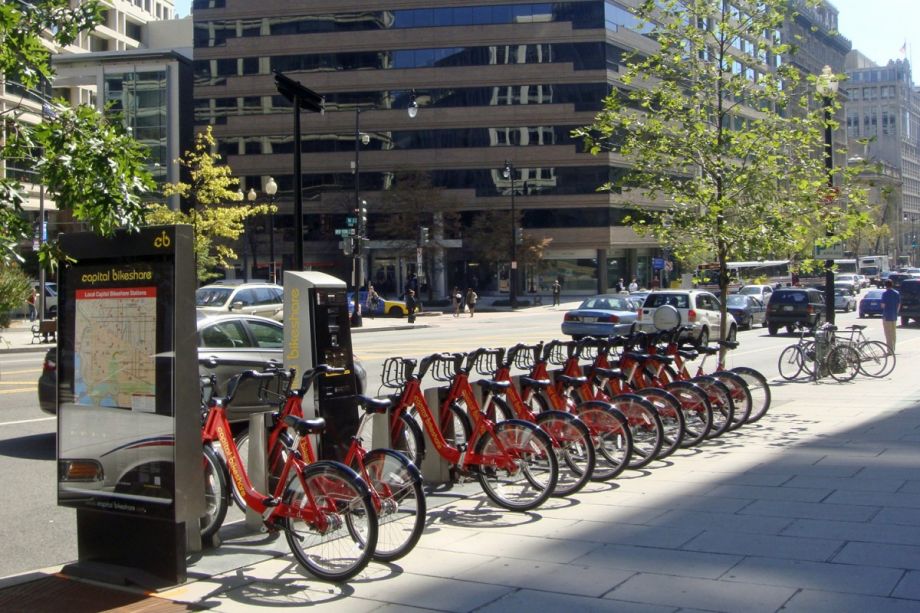 With bike-share systems in at least 119 cities and towns, a growing number of private dockless bike-share companies popping up around the country, and a fairly new industry association, bike-sharing is firmly rooted in the U.S.

Representatives from the North American Bikeshare Association (NABSA) and PeopleForBikes took that message to Washington, D.C., last week as part of a one-day bike-share lobbying and education effort. While a group of six advocates pales in comparison to the armies of lobbyists and lawyers some industries have in the nation’s capital, the now-annual trip to D.C. does reflect how much bike-sharing has grown.

This year’s group, which included reps from bike-share systems across the U.S., had two objectives: Lobby congressional staffers to kill a budget amendment that could eliminate a key federal source of bicycle funding, and lead a briefing to educate Congress on the growth and evolution of the bike-share industry.

“Our D.C. trip is a sign that it’s an important industry to recognize and support,” says Sam Herr, NABSA executive director. “We made very clear that bike-share has far-reaching effects that are bipartisan. We wanted to show our representatives that we’re having impacts not only in the realm of transportation, but also innovation, economic development, sustainability and public health.”

The group met with staffers for Reps. Robert Pittenger of North Carolina, and Kay Granger and Michael Burgess of Texas. Their goal was to lobby against the Woodall Amendment on the House of Representative’s 2018 proposed budget. Congress occasionally uses a process called rescission to essentially take back unspent transportation funding from state DOT budgets. In the past, there have been protections that prevented Congress from rescinding funding from metropolitan planning organizations, the regional groups that distribute federal funds for local projects. The Woodall Amendment would eliminate protections for MPO funding, leaving bicycle and pedestrian projects vulnerable to rescission.

“I have about $1.76 million in CMAQ funding and some other federal transportation money that I was planning on spending over the next 18 months,” says Dianna Ward, who’s executive director of Charlotte B-Cycle and was a member of the group that visited Capitol Hill this year. “We made a commitment to expand and purchase stations. We could have money clawed back and not afford expansion.”

Ward says they didn’t come away with any guarantees about the amendment, but she thinks the staffers were “receptive.” “I didn’t leave there thinking that they were not supportive of our request,” she explains.

The group also made a plug for Oregon Rep. Earl Blumenauer​’s Bikeshare Transit Act, which would make bike-share eligible for pre-tax commuter benefits the same way parking and transit is.

Herr says about 15 people, mostly congressional staffers, attended NABSA’s briefing on the growth of the bike-share industry. “We wanted to educate our congresspeople about the industry so that they keep bike-share in mind as there are policy opportunities,” Herr says.

So what does your average Congress member or staffer think of bike-share?

According to Herr, it’s still all over the map. There are the members of the Congressional Bike Caucus who are well versed in bike-share. Others, much less so. “There’s also work to be done to increase the awareness,” Herr says.

Ward thinks the fact that D.C. was the first U.S. city to get a bike-share system helps their case. “I suspect many staffers probably utilize Capital Bikeshare to get around,” Ward says. “Cycling is a bipartisan issue, so it was an easy conversation.”

Then, of course, there’s the fact that in August, President Donald Trump removed the “secret” bike-share station located inside the White House gates, installed while Barack Obama was in office. Surely that helped bring bike-share to Congress’ attention.

“That did not come up. Nobody brought it up,” Herr says with a laugh.