Urban Roots is a Growing Thing 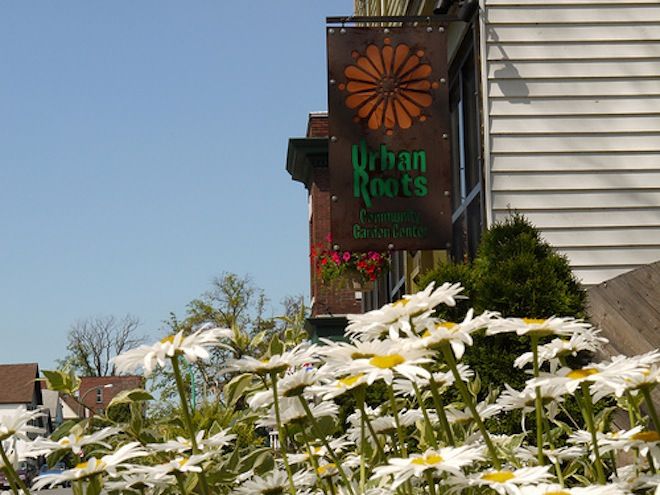 Gardening beautifies and improves neighborhoods and unites and activates people. This could not be truer than in Buffalo, New York, a rust belt city struggling with a protracted economic downswing, population loss, crime, poverty and urban blight. Urban Roots Community Garden Center, a cooperative located on Rhode Island Street on Buffalo’s west side, has been instrumental in the growth of the city’s gardening culture. It is in fact the only garden center of its kind in the United States.

Buffalo caught the gardening bug two decades ago and hasn’t looked back. In a city renowned for it’s raging winters, it was inevitable for gardening to gain traction among the populace. While Buffalo’s growing season is decidedly short, local gardeners know how to make the most of their time in the dirt. Buffalo in Bloom, Garden Walk, Block Club beautification efforts and community gardens, Grass Roots Gardens, and urban farming are several among many examples of the channels that have contributed to the development of the city’s burgeoning culture of growing.

Interestingly, Buffalo’s community of gardeners began their various garden practices without a source for plants and supplies in the city limits. The seed for Urban Roots was planted in that soil. A group of enterprising activists with a vision worked for two years – conducting surveys, organizing plant swaps, making contacts – to make a garden center a reality. In the spring of 2007 Urban Roots opened its doors.

The Urban Roots community is now almost 800 member/owners strong. Each member/owner makes a $100 investment in the enterprise. Its cooperative structure along with the widespread support of the Buffalo community have been critical to Urban Roots’ growth into a vibrant business that employs people and serves a continuously growing customer base well beyond even its 800 member/owners.

From a back-room in a broken house with a vacant lot next door, Urban Roots has become a cool shop stocking houseplants, tools, supplies, pots, accessories and decor in a “garden style”, gifts for gardeners, and books.. During the spring, summer and fall, its triple lot is alive with plants of all kinds: annuals, perennials, shrubs, trees, herbs, fruits and vegetables, along with stacks of topsoils, mulches, compost and manure, peat moss, sand, and other supplies. It is open year-round with seasonal merchandise such as pumpkins, squash, and gourds on sale in the fall and living Christmas trees, holiday greens and plants in winter.

Urban Roots has worked to increase the product that it buys from local growers and other vendors who are also trying to succeed in the Western New York economy. The cooperative’s goal is to eventually buy all of its plant product locally. This ambitious procurement plan is built upon making connections with people who are growing locally and by getting Buffalo’s hometown growers to produce what the gardening community wants. In addition to developing this network of suppliers of plant material, Urban Roots is also a source for garden art, sculpture and decor made by local artists and artisans.

Urban Roots also works to consistently improve the selection of plants and supplies they offer Buffalo’s gardening community, including the newest cultivars of perennials and annuals, as well as old reliable varieties; more native plants; supplies for rooftop and vertical gardening and container gardening; organic and heirloom varieties of vegetables and flowers; seeds and supplies for seed saving, seed starting; bulbs for both fall and spring planting; rain barrels, composters, bird feeders and seed. While Urban Roots might be notable simply for its existence in the challenging environment of Buffalo’s west side, it has become much more: a quality year-round garden center.

Urban Roots is more than a store. A vibrant program of workshops, discussions, presentations and community events is offered year-round to educate, edify and inspire gardeners of all kinds and all ages. School groups take tours of Urban Roots, learn about where it came from and what it hopes to become. Students and their teachers have partnered with Urban Roots staff or member/owners to garden in vacant lots as well as in the cooperative’s own lot, planting vegetables and flowers in the spring and then coming back to tend and harvest when school starts again in the fall. In this way, youngsters begin to learn about where their food comes from and how to eat healthfully.

Urban Roots is also joining with other community groups to support gardens where people from Buffalo’s many refugee communities can grow foods of their own culture, foods that might not be available to them in American supermarkets, and foods that nurture a sense of familiarity and home to people trying to begin a new life in a new place.

Urban Roots has come a long way in 4+ years but has by no means reached its full potential. A capital campaign is currently underway to help Urban Roots remain responsive to Buffalo’s ever growing gardening culture. The cooperative is constantly striving to recruit new member/owners to invest in building Urban Roots into an even more outstanding and innovative garden center.