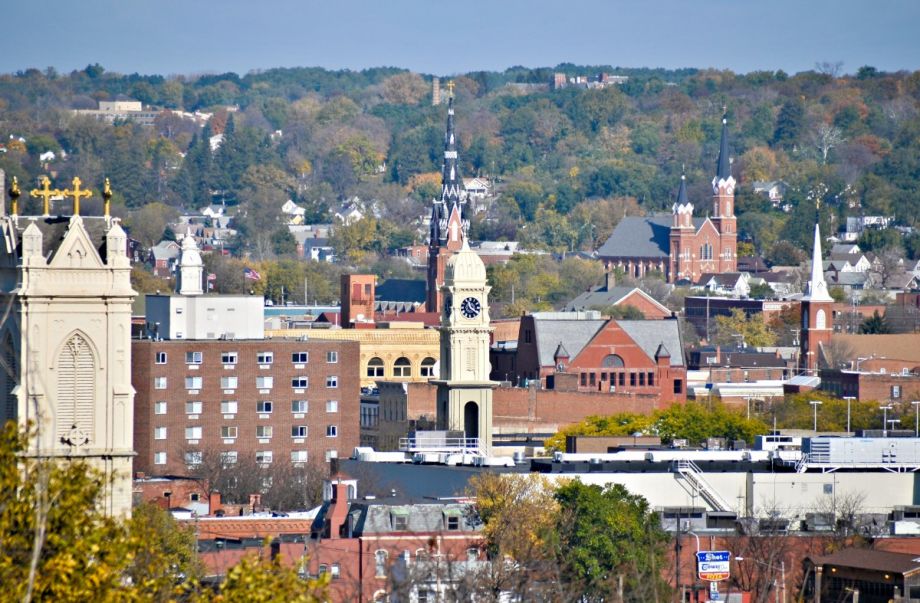 Dubuque, Iowa, above, has been intentionally bringing public health issues into the city planning process. (Photo by Dirk)

Dubuque, Iowa, won a $31.5 million grant last week to floodproof 320 houses and build a series of upgrades to its stormwater infrastructure, through HUD’s billion-dollar National Resilience Competition. Mary Rose Corrigan helped to make it happen, but she doesn’t work for the water department. She’s the city’s public health specialist. Corrigan is part of the growing movement to link public health to urban planning in cities.

“It’s come to the forefront in a lot of ways. A lot of my peers and mentors are already [doing this], this is sort of the new status quo, if you will,” says Anthony Smith, the cartographer behind the Healthy City Maps blog. “Now health and well-being are like the new sustainability.”

Anna Ricklin, manager of the American Planning Association’s Planning and Community Health Center, says Dubuque, which has about 60,000 residents, is excelling in this area, pointing to the city as a model for larger U.S. cities. Its size has perhaps allowed it to be “more nimble and more responsive,” she explains, with more freedom to experiment. An APA report commended Dubuque’s comprehensive plan for its consideration of mental health, and noted that since city departments began collaborating, Dubuque has expanded its parklands, built a new pedestrian bridge, paved new sidewalks and run a home improvement initiative for greener dwellings.

Aside from its size, Dubuque’s willingness has also been key. “What we discovered at the end of the day is that a lot of it is based on human relationships,” Ricklin says of the center’s research, “and the motivation of champions to really meet their colleagues across the aisle, to meet their colleagues in the other department and go out and create more of an ongoing relationship.”

Advocacy for these interdepartmental collaborations began in earnest in the ’90s and has grown more popular since. “A lot of it [back then] was around physical activity and the built environment,” says Chris Coutts, director of Florida State University’s joint master’s degree program in planning and public health. “Late ’90s, early 2000s, you see funding start to be thrown at it,” he recalls. “It seemed that that was the trigger that it needed.”

In the early history of American cities, planning and public health were often one and the same. Before World War I, in response to the dangers posed by breakneck-pace urbanization, engineers worked to shape cities so they would be less vulnerable to contagious disease. Doctors and engineers worked together to produce a lot-by-lot survey of the entirety of Memphis in 1878, for example, after yellow fever infected 17,000 of the 19,000 residents who hadn’t fled the epidemic, and claimed 5,000 lives. Sanitary engineers inspected buildings for code requirements, but they too planned and “built a new urban infrastructure,” Jason Corburn writes in a paper on the history of the fields, “such as street beds, freshwater and sewage systems, and filled-in marsh and coastal wetlands, where disease was thought to breed.” Planners in turn built so-called “breathing spaces,” parks and recreational centers, breaking up increasingly crowded neighborhoods with green space.

First, there’s the present gulf between professionals of the two disciplines. Second, he perceives a tendency toward approaches hewed to science, rather than collaborative planning based on “vision[s] of a healthy city,” as a well as a reliance on urban design to create ideal social climates — a third challenge. Last is the overlap of clearing waste and pushing out undesirable populations, which the fields have been preoccupied with historically, often translating to racist and anti-immigrant approaches in the past. An ideal reintegration strategy, he writes, would have to address all of these matters. Of course, across municipalities, the depth of collaboration ranges.

A 2010 APA survey across planning agencies showed that 31 percent of responding jurisdictions were addressing public health topics in their comprehensive plans. Only 19 localities (out of 890 respondents) had more than 15 or 16 general public health topics referenced. Conducting health impact assessments (HIAs), a process that pulls from multiple data sources to examine aspects of a proposed policy or project, is favored by a contingent of prominent academics and institutions, namely, the Centers for Disease Control and Prevention. But HIAs are voluntary, and it’s hard to call them common: The 2010 APA survey found that 3.7 percent of respondents used them, or nine jurisdictions.

“Over the last couple years, it’s been more of an effort to incorporate [HIAs and other methods] into planning decisions early on,” says Lisa Chen, a planner with the city of San Francisco and a graduate of the dual degree Berkeley program. The city has lists of assessment areas, research collected on each through the San Francisco Indicator Project. The data gathered on more than 100 indicators allow health analyses to go faster, Chen says. Take the San Francisco Planning Department’s Central SoMa plan. Through upzoning and transit-oriented development, the proposal could add 11,700 residential units and 45,000 jobs, city planners say. Early health analyses pulled neighborhood data to evaluate air quality and green space, Chen explains, among other indicators. “We want to not think about how do we solve an issue after it’s already there, or solve the health impact after people are already being burdened, but what is causing this issue in the first place.”

San Francisco is considered a leader in this work, as are cities like Los Angeles and Riverside, California. But what of localities beyond the West Coast? “It’s a really important question to consider how such policies and actions are being spread across the country because the ultimate goal of course of the reintegration of health and planning is not to create more inequities by having certain places have the benefit of that type of thinking or those types of policies and then essentially have other places left behind in a more siloed approach,” says Ricklin. “We are seeing examples of places like Dubuque, or Trenton, or Fort Worth, of places around the country that are starting to get on board, but I think we do have a long way to go.”

To promote more blended approaches, the APA Planning and Community Health Center’s Plan 4 Health, funded by the CDC, backs like-minded programs around the U.S. and opened a peer learning network for participating cities.

In Dubuque, city and county planning and health officials have been meeting since the ’90s. Approaching the year 2000, a local hospital reached out to health department officials to invite them to work on a community health needs assessment (CHNA), Corrigan recalls. Meanwhile, the planning department was due for an updated comprehensive plan. And so, their research and analysis aligned. Eight years later, when the planning department released a 2008 update, its comprehensive plan bore strong healthcare and environmental focuses, building upon reports from health colleagues.

“I think that’s why the state looked to us to partner with them,” says Corrigan of the HUD grant. “Because we have good documentation on our need.”

The latest county CHNA was recently approved. Corrigan says it should be out any day now.