URBAN NATION: The Feds Lionize Mayors, But Forsake Their Cities – Next City

URBAN NATION: The Feds Lionize Mayors, But Forsake Their Cities 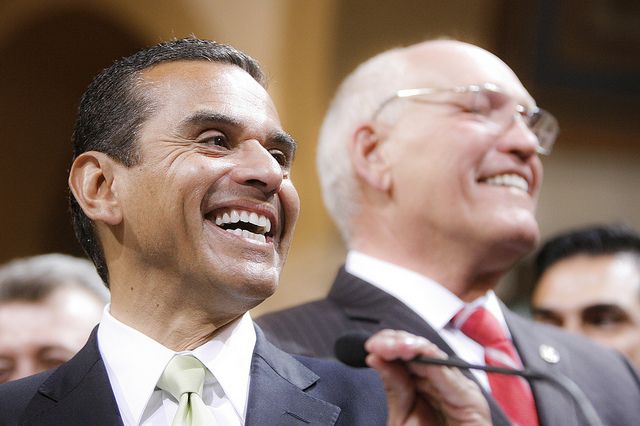 Politicians always pay the same compliment to mayors: That mayors know how to get things done. In his speech to the Democratic National Convention on Wednesday, former President Bill Clinton even gave shout-outs to Chicago’s Rahm Emanuel and Los Angeles’ Antonio Villaraigosa for their willingness to cooperate with political foes.

However hackneyed, this image of mayors is mostly true. Trash gets picked up. Kids go to school. Roads are paved. (Though the mere fact that these things happen glosses over the rather important process of how they happen, to which both Villaraigosa who is negotiating a new system of trash removal and Mayor Emanuel who is dealing with a teachers’ strike can attest.)

But shouldn’t we be tired of this picture of mayors scuttling around their respective cities putting out fires, filling potholes and keeping the peace while politicians in Washington compliment their do-goodery? We might all be accustomed to D.C.’s inaction, but since when did we become so resigned as to accept that mayors should succeed despite the feds?

The truth is that the federal government long ago conceded that federal urban policy was merely an issue of intergovernmental relations. Partnerships between the federal government and mayors either help cities flourish by providing financial support or stifle cities by the same means. But under no circumstances is Washington itself responsible for what goes on in urban America.

In a paper presented to the American Political Science Association last year, Michigan State professor Joshua Sapotichne identified a change in federal urban policymaking in the 1970s: Congress’s engagement with cities shifted from a concern with substantive urban issues to a concern with “administration.” From 1946 to 1976, congressional urban policymaking had focused on the recognizably urban issues of “Community Development,” “Socio-Spatial Welfare” and “Physical Growth and Infrastructure.” In contrast, such policymaking from 1977 to 2004 revolved around issues of “New Federalism,” “Criminal Justice” and “Regulatory Federalism.”

In other words, the Nixon-Reagan philosophy that the federal government can do best for cities by doing least has won the last 30 or so years of federal urban policymaking. As a result, at least until very recently, conversations about community development, transportation and infrastructure have necessarily been couched in the language of federalism — will the long fingers of the federal government stifle the good work being done by mayors? — rather than the language of place.

The effects on city governments have been profound.

Direct federal aid to cities dropped from 15 percent of city revenues in 1978 to just 3 percent in 1999. While direct aid to city governments is highly variable across cities (and difficult to estimate accurately), in 2006 it represented 5 percent or less of total revenue for the majority of the country’s 25 largest cities. 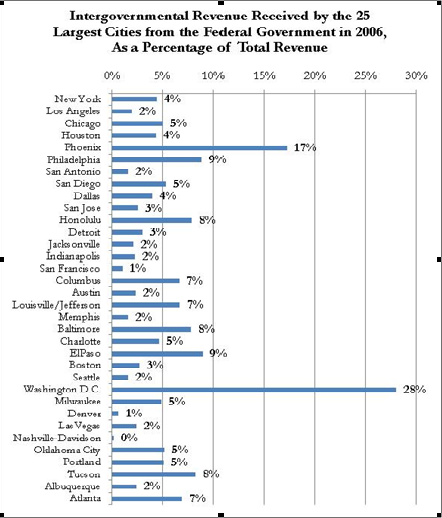 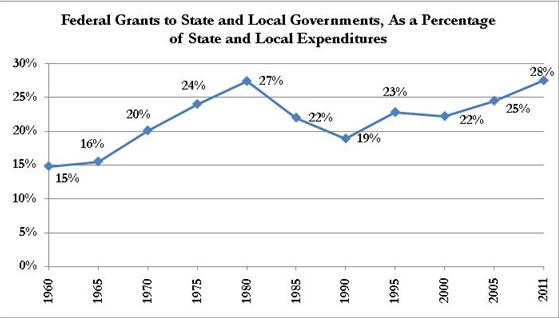 The most profound shift, however, has been away from policies designed to improve physical infrastructure and towards ones benefiting people. In 1960, federal grants for physical capital represented about 47 percent of federal grants to state and local governments. By 2011 this percentage had dropped to 16 percent. Meanwhile, grants for people have increased from 35 percent to 64 percent of total state and local grants. 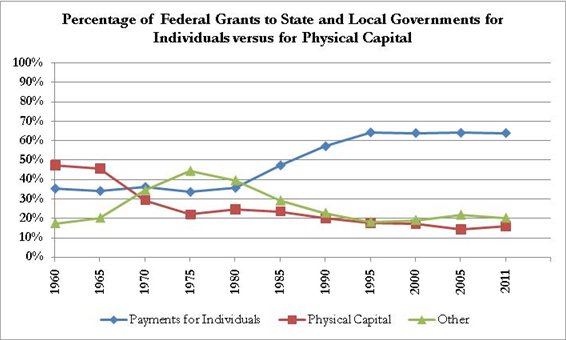 This shift, driven primarily by increased spending on health care and an increasing reliance on state block grants, is by no means a bad thing. But it demonstrates that presidents and congresses have been unconcerned with the role that place (in general) and cities (in particular) play in the country’s economic and social well-being. Place has become entirely decoupled from conversations about prosperity. Indeed, the Republican platform approved two weeks ago would continue this willful ignorance of place, even mocking the Obama administration’s willingness to consider economic geography as “social engineering.”

This era of federal urban policymaking shouldn’t be based on questions of whether the federal government is interfering in city affairs. Regardless of who sits in the Oval Office, mayors will make sure that the trash is picked up, kids go to school and roads are paved — because that is their job. The Republican default to an unconscious urban policy that throws cities to the wolves isn’t good enough. But neither is simply helping mayors do their jobs.

The federal government should once again take on the responsibility of ensuring that places thrive.

Harry Moroz is based in Washington D.C. He has written about cities for The Atlantic, Salon, the San Francisco Chronicle, the Philadelphia Inquirer and other publications.