URBAN NATION: Stanley Kurtz, Defending the Suburbs from His Own Doomsday Fantasy – Next City

URBAN NATION: Stanley Kurtz, Defending the Suburbs from His Own Doomsday Fantasy 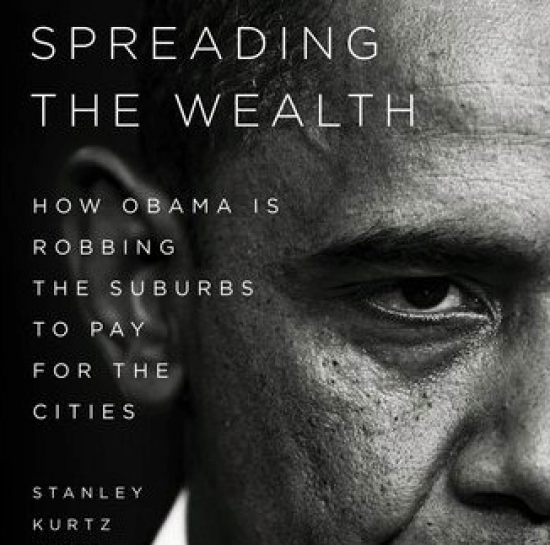 Urban Nation is an occasional column by Ben Adler, NAC’s federal correspondent, on the latest urban-related policy issues in Washington.

If you read Next American City, you probably think you are reasonably well-informed on the major urban policy issues of the day. You poor sap! You’ve been deceived. It turns out, according to Stanley Kurtz — a fellow at the conservative Ethics and Public Policy Center — that President Obama has a plan to massively overhaul the nation’s cities and suburbs. It’s all right there, if you just connect the wildly disparate dots.

Kurtz reveals Obama’s villainous plans (or “schemes,” as he calls them) in his new book, Spreading the Wealth: How Obama is Robbing the Suburbs to Pay for the Cities. The book was also recently excerpted in the National Review, to which Kurtz regularly contributes. Evidently, the mainstream media has ignored this coming authoritarian power grab. But fear not! Kurtz is here to warn you, just in time to make sure you vote against Obama this November.

“Beneath the public’s radar Obama’s plan to undo America’s suburbs moves forward,” Kurtz dramatically intones. “Before you decide whether President Obama deserves a second term, this is a transformative enterprise about which you should hear.”

“The fondest dream of the Chicago-based community organizers who trained Obama was to abolish America’s suburbs, which according to their radical philosophy were enclaves of privilege from which the urban poor were unfairly excluded…. Obama means to fix that with regulations designed to force Americans out of their cars and into high-density urban centers, squeezing the population into a collection of new Manhattans. Obama also aims to force suburbanites to redistribute tax money to nearby cities while effectively merging urban and suburban school districts to equalize their funding.”

Kurtz’s theory is based on some awfully tenuous threads. Basically, he notes that some community organizers Obama worked with in Chicago have gone on to work for organizations, such as the Gamaliel Foundation and Building One America, that advocate for policies meant to address the health of cities and inner-ring suburbs in a collaborative regional fashion. But other than a few speeches by administration officials in front of these non-profit advocates, Kurtz has no evidence that Obama or his staffers intend to pursue every proposal offered by them. Nor does Kurtz even prove that Obama’s former colleagues are actually proposing quite the Great Leap Forward that he describes.

Here’s a typical example: Kurtz writes, “The real goal of Building One America and of President Obama himself is to abolish America’s suburbs.” The sources for that claim, according to Kurtz’s footnotes, are a pair of policy reports from 1999 and 2003, written by David Rusk, a “strategic partner” for Building One America. Of course, Rusk doesn’t say he wants to abolish the suburbs, so Kurtz sources the claim that his proposals would actually amount to suburban abolition to a pair of articles from 1993.

To say this proves that Building One America’s agenda is to abolish the suburbs is, at best, highly debatable. To say it proves that Obama supports such a dramatic move is pure fantasy. If we assume that every politician supports every proposal produced by any affiliate of an organization run by someone he once knew decades ago, liberal propagandists could just as easily accuse, say, Paul Ryan of supporting any number of little-noticed far-right proposals.

The Office of Sustainable Communities “coercively” assistis in the greening of Lincoln, Neb. Credit: EPA

At least Kurtz felt an obligation to pretend he had documentation to support this claim. In many cases, he simply substitutes ideology for evidence or even argument. For instance, Kurtz uses nothing but pure assertion to rebut the understanding — widely accepted by experts — that America’s landscape reflects 60 years of encouraging suburban sprawl through tax, zoning and transportation policies that favor building roads and parking, buying new homes, and segregating uses over mass transit, density and renting.

“America’s suburbs are an authentic product of citizen choice, and the plan to eliminate them is deeply coercive and thoroughly hostile to our traditions of individual freedom,” Kurtz declares. And later: “Government policies did not create the suburbs.” But he offers no evidence that sprawl is the product of citizen choice, no acknowledgment of, much less engagement with, surveys showing more Americans would like to live in walkable urban environments than can afford to, no explanation for why walkable neighborhoods are so much more expensive if they are not more popular. He does not even bother to explain why current rules, which tell land owners that they cannot build on most of their zoning lots, nor can they build anything at all without adding parking, are not coercive — but that easing those rules to allow more dense development somehow is.

Curiously, Kurtz argues that destroying the suburbs is a lifelong obsession of Obama’s, but that the president has waited to act on this passion until a second term, which of course he may not get. “Redistributing money to the cities and upending America’s system of local government to get there aren’t just one more Obama policy initiative,” writes Kurtz. “It’s what the president cares about most.” Later, Kurtz adds, “This is a crusade at least on par in its long term ambitions with Obama’s health care reform, his cap and trade proposals, his stimulus, and his banking law.”

What do you notice about all those examples? Obama pursued all of them in the first half of his first term, lest he lose his chance to pursue them at all.

It’s too bad that Kurtz is wrong about what Obama would do, because some of the agenda he lays out as self-evidently nefarious would actually benefit the public. If the U.S. did employ policies to knit together cities and suburbs, integrate socio-economic classes and reduce auto-dependence, we’d have healthier cities and suburbs.

Here’s Kurtz’s summary of the policy levers Obama would use:

“One approach is to force suburban residents into densely packed cities by blocking development on the outskirts of metropolitan areas, and by discouraging driving with a blizzard of taxes, fees, and regulations. Step two is to move the poor out of cities by imposing low-income-housing quotas on development in middle-class suburbs. Step three is to export the controversial “regional tax-base sharing” scheme currently in place in the Minneapolis–St. Paul area to the rest of the country. Under this program, a portion of suburban tax money flows into a common regional pot, which is then effectively redistributed to urban, and a few less well-off “inner-ring” suburban, municipalities.”

This all sounds very ominous if you don’t know what Kurtz is really talking about. But go through the examples and you realize each is just describing common-sense regional planning efforts. One should not necessarily block all development on the outskirts of urban areas. But Portland, Ore. has famously zoned to require higher density development to occur within the urban core rather than on the periphery — a measure that helped make Portland more efficiently developed to accommodate a hub and spoke mass transit system, and thus less traffic-clogged than rivals such as Seattle.

Watch out, the president is out to get you. Image via Shutterstock

“Discouraging driving through a blizzard of taxes,” is another misleading phrase. Perhaps a “blizzard” of taxes (that would be millions of taxes, each as unique as a snowflake?) would be excessive. But congestion pricing — which uses a market-based solution, rather than command and control, to put a price on the negative externalities of driving — is supported by centrist technocrats such as New York City Mayor Michael Bloomberg. Inclusionary zoning, which would require suburbs and not just cities to provide some low-income housing, is only a bad thing if you think socioeconomic integration is bad.

Kurtz evidently believes just that. After Obama has effectively merged urban and suburban school districts, Kurtz writes, “If you can afford to move to a suburb at all, there will no longer be a point.” Usually pro-suburban conservative pundits pretend suburban growth is all about the more universal desire for space, so give Kurtz credit for being honest as to why many conservatives like suburbs and hate cities: They want the freedom to segregate. It’s important to remember that, in the years after Brown v. Board of Ed, sprawl replaced Jim Crow.

It should be obvious to Kurtz, and anyone else familiar with American politics, why none of his hysterical predictions will actually come to pass. Even if Obama wanted to pursue the plans Kurtz claims he does, Republicans control the House of Representatives. After November they may control the Senate. Even if Democrats ran Congress, the Senate is biased towards small, rural states. For Democrats to control the House they must win many seats in notoriously anti-urban outposts, from Upstate New York to small towns in the Upper Midwest to the suburban fringes in California.

It is axiomatic that, in a majority suburban country where cities tend to vote Democratic and rural areas vote Republican, suburbs constitute the decisive swing territory where national elections are decided. The idea that Democrats would commit political suicide by trying to bully suburbanites into giving up their cars and sending their children to school with minorities is absurd, given that they won’t even propose raising the gasoline tax to keep pace with inflation. Obama says he wants eliminate tax loopholes, but he never endorses removing the biggest one of all, the sprawl-inducing mortgage interest tax deduction.

So Stanley Kurtz should rest assured, that none of his nightmares will come to pass, whether or not Obama wins a second term.