URBAN NATION: In Fact, You Do Find Conservative Ideas in Cities – Next City

URBAN NATION: In Fact, You Do Find Conservative Ideas in Cities 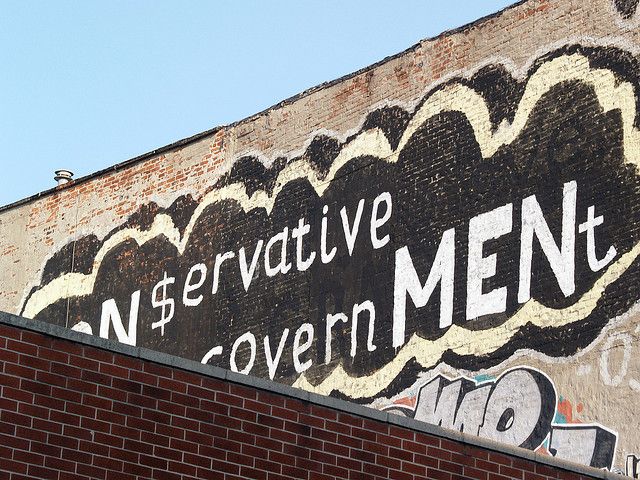 Aaron Renn took up the theme at New Geography. He seconds Glaeser’s arguments while also calling on conservatives to engage with cities “in order to get more of a voice in the cultural debates.”

Both argue that Republicans have largely abandoned cities at the national and local level. Renn laments that “even among the upscale white urbanist crowd, Republican policies and candidates are finding few takers.” And Glaeser contends that “The party, nationally and even locally, has focused on winning suburban and rural votes and has stopped reaching out to city dwellers.”

But other than describing President Obama’s drubbing of Mitt Romney in urban areas, Glaeser and Renn largely take for granted that Republicans neglect cities and that the influence of conservative ideas in cities is waning.

Glaeser in particular writes that:

But handouts and other pandering are far less valuable than the other asset that Republican-abandoned cities have lost: the particularly Republican perspective, with its focus on economic freedom, competition, and law and order.

Party affiliation — and of course Obama’s urban electoral success — certainly suggest that there is some truth to this narrative of Republican neglect. But there are several reasons why the call for a triumphant Republican return to the city is overstated.

First, there is evidence that there is now more balance between Republicans and Democrats in cities, at least at the mayoral level, than there used to be. In compiling a sample of cities with populations over 25,000, Fernando Ferreira and Joseph Gyourko find that “Over time, however, the proportion of Republican mayors has increased substantially…” By 2005, there was even a slightly higher proportion of Republican than Democratic mayors. 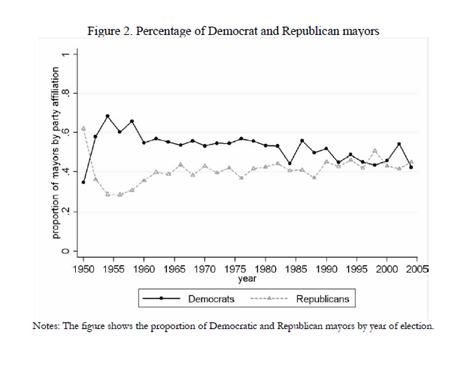 The same study gives another reason not to take Renn and Glaeser’s arguments too seriously: Party affiliation doesn’t seem to matter very much at the city level.

Ferreira and Gyourko study mayoral elections in more than 400 U.S. cities between 1950 and 2000, a sample they believe to be reasonably representative. They find that:

Whether the mayor is a Democrat or Republican has little or no impact on the size of local government, the composition of local public expenditures, or the crime rate.

That is, a mayor’s party affiliation doesn’t impact how large local government is; how much money is spent on labor, public safety, and parks and recreation; or the crime rate.

At first this finding seems surprising, impossible or even scary. But Ferreira and Gyourko argue that they are picking up the impact of “Tiebout sorting,” which is the theory that, because people are generally able to move freely within a region, they can choose the type of place (say, high tax, high service) they wish to inhabit. This means that people sort into relatively homogenous cities. (It should be noted, as Ferreira and Gyourko stress, that their evidence for Tiebout sorting is persuasive but not conclusive.)

This study isn’t the only evidence that the political party of mayors may not matter as much as we might think. Elisabeth Gerber and Daniel Hopkins study the question using mayoral election returns from 1990 to 2006 and city fiscal data. They find that Democrats do indeed spend less on public safety, but that there are no differences in tax and social policy between Democrats and Republicans. These are “areas where federal and state actors exert more authority,” which puts constraints on mayoral partisanship.

Finally, in a different study Ferreira and Gyourko find that mayoral gender has no impact on the size of government, on the composition of municipal spending and employment, or on crime rates. As Ferreira and Gyourko point out, this contrasts with much research showing that the gender of politicians matters for policy outcomes (This paper by Esther Duflo is a notable example, as is this work by Christopher Berry and Sarah Anzia). This is further evidence that the uniqueness of a given mayor does not matter very much to policy outcomes.

However it happened (and I fully concede that it might be because these policies work), the urban policies which Glaeser and Renn claim are archetypically conservative dominate urban policymaking today. To take the city I know best as an example, Democratic Chicago Mayor Emanuel is an ardent supporter of charter schools, proposed congestion pricing and worked to simplify regulations and inspections for city businesses. The previous Democratic Mayor Richard Daley privatized the city’s parking meters. All of these are policy approaches — schools, market-based transportation solutions, streamlined regulation, public-private partnerships — which Renn and Glaeser believe are Republican strengths.

Chicago is no fluke: 55 percent of charter schools are in cities, and over the last 10 years enrolment in all charters has increased 182 percent. The average city partners with the private sector to perform 23 of 65 basic municipal services. A survey of local government privatization trends shows that for-profit contracting is far from the norm. But it is neither rare nor disappearing, either. 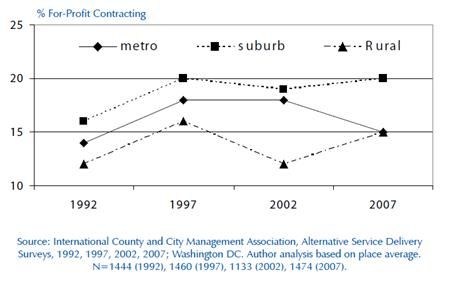 Glaeser writes that “not all cities have gotten on the [tougher and smarter policing] bandwagon, and safety remains a grave concern in many.” But as early as 2007, 11 cities had adopted Compstat-type programs, which Glaeser heralds as a conservative innovation. No less progressive a place than San Francisco came close last summer to adopting stop-and-frisk, perhaps the “toughest-on-crime” approach to public safety. As former LAPD Police Chief Bill Bratton says, “Every police department in America does it.”

Yes, Obama trounced Mitt Romney in urban areas. And, yes, at the national level, it truly does seem that the Republican Party could not care less about cities.

But policymaking at the local level is a distinct beast. Whether because people have a lot more choice over the city they inhabit than the country they inhabit, or because cities by necessity have become more fiscally conservative, at the city level Democrats aren’t very different from Republicans and conservatives have had a lot more success than they give themselves credit for.

Finally, Renn worries that the purported Republican absence from cities implies their absence from “the cultural/media industry,” which in turn means that conservative ideas are excluded from public debate. But Renn himself praises the work of the conservative think tank the Manhattan Institute, which along with its publication City Journal and the business advocacy group the Partnership for New York City, have successfully constructed a conservative, business-friendly environment in supposedly bleeding-heart liberal New York. As Alice O’Connor describes in a brief history of the Manhattan Institute and the rise of a “conservative counterintelligentsia”:

I aim also to underscore the importance — in a [conservative] movement usually associated with ‘suburban warriors,’ white working-class ‘backlash,’ and Sun Belt wealth — of an elite mobilization spawned in the heart of the Eastern Seaboard and Rust Belt cities traditionally associated with urban liberalism, a mobilization that, while unlikely to convert those cities from blue to red, seeks to use them as springboards for political influence on a national stage.

Republican disdain for cities at the national level does not imply the absence of conservative ideas at the local level.