For These Urban Farmers, the Harvest Is About More Than Healthy Eating – Next City

For These Urban Farmers, the Harvest Is About More Than Healthy Eating 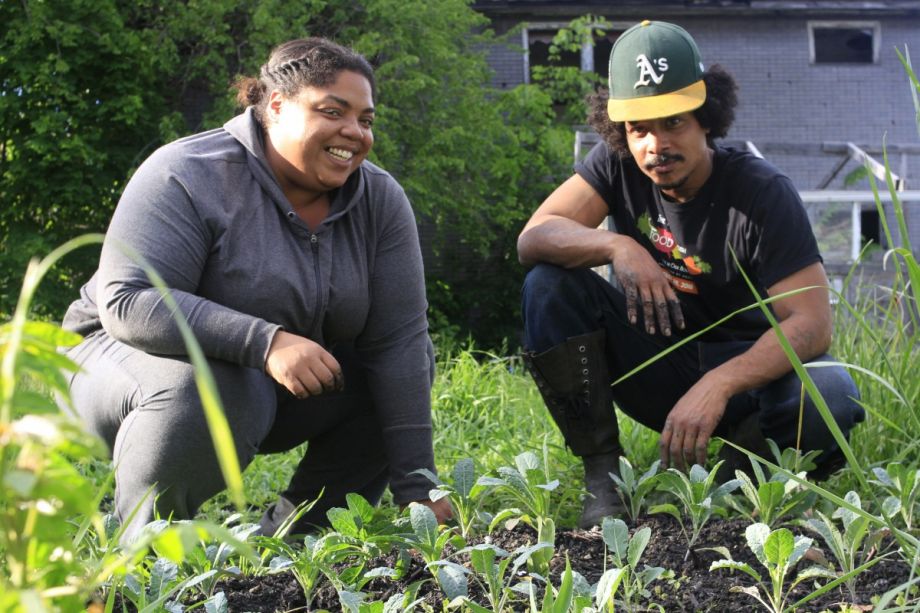 Summer is usually the most exciting season for a gardener, but for many of Detroit’s black farmers, the harvest is also about survival.

In its annual look at the city’s food systems, the Detroit Food Policy Council, a food security advisory board, found in 2017 that 47 percent of Detroiters — roughly 300,000 residents — were eligible for food stamps. And nearly half of Detroiters are at the mercy of junk food retail. Fringe food retailers, such as liquor stores and convenience marts, make up 92 percent of the authorized food stamp retailers in the city, whose population is majority black.

Food sovereignty — when a community has control and autonomy over the food that enters it — is a simple concept, but achieving it is complicated. Transportation and land access, gentrification and food culture all play a role. Across the city, black farmers are working to overcome these barriers, with an eye toward healthier residents. One local entrepreneur also has plans for Detroit to once again have a black-owned grocery store.

“The goal is to get healthy produce inside the inner city of Detroit,” says Erin Cole, who operates a neighborhood farm, Nurturing Our Seeds, on the city’s east side, with her husband, Magnetic Sun.

Cole, who Sun says is the brains of the operation, has a family history in farming. Before moving to Detroit, her family lived in the South. Her grandparents had a farm; she worked on it during family trips. College in the South, in Tennessee, reconnected her to that childhood activity.

Growing up, Sun says Eastern Market, a Detroit food hub, was a constant fixture in his life. His great-grandmother took him there every Saturday.

“Ever since I could walk I was at the Eastern Market,” he says. “She had me there every Saturday. I would plant in the backyard every year, a few tomatoes, collard greens, flowers.”

It is on this same land, in his great-grandmother’s backyard where Sun now grows raspberries, onions, garlic, peach trees and over a dozen other crops too for NOS.

When the idea for farming in their east side neighborhood was introduced, Cole tells me that it wasn’t about following an urban farming trend, but more of a “I can’t feed my kids this poison” mentality. Like many growers, Cole and Sun spend a few Saturdays a month selling produce at the Eastern Market, but Cole says they aren’t farming for profit, and that the farm’s success is measured by their ability to provide healthy foods to the local community.

NOS hires laborers and apprentices from the neighborhood. Sun says it’s a way to give the youth in the neighborhood an opportunity to gain a skill, keep them out of the streets, teach discipline and provide a chance for them to earn money during the summer.

“It’s a wonderful experience working with him Sun,” says Bryce, an NOS apprentice. “Once I came across it, it was more like ‘how do you do that?’ But once I got into it, I gained more interest and started doing it.”

Sun recalls working with an apprentice, before NOS even established a name for itself, who realized through farming that there were legitimate ways to make a living outside of the streets.

“Farming is a lost art, a skill in black culture that disappeared after the Great Migration,” says Sun. “Now it’s time for us to get those farming skills back. Pass them down to our sons.”

Sun has spent time in both the juvenile and adult prison system, which ultimately ended up connecting him back to the gardening roots he formed as a child.

“In prison, I ended up dealing with a lot of the lifers and their garden plots, helping them out, building with them. That allowed me to eat. I found that you could eat better out of the garden than you could out of the chow hall,” he explains. “That’s what brought me back to farming.”

Since its start in 2011, NOS has been rather successful for an independent farm without corporate or foundation backing. Cole says she and Sun have applied for grant funding in the past, and received donations from neighbors, family and friends, but that the farm is mostly self-funded. During the school year, Cole works as an elementary school math teacher. Sun has an entrepreneurial spirit and frequently gets contracts for home renovation projects.

There’s little financial reward in growing your own food. Most grant money won’t cover wages; much of the federal funding for agriculture is reserved for corporate farming. Most gardeners rely on donations and personal income to finance their farms. Until recently, federal assistance for urban gardeners has been left out of the national farming conversation. Last year, Senator Debbie Stabenow, of Michigan, introduced the Urban Agriculture Act of 2016 — which was praised by Detroit Mayor Mike Duggan; it would permit the U.S. Department of Agriculture to expand its financial and education resources to Detroit’s urban farmers.

Even if the bill passes, there’s still a land issue. Despite Detroit’s vacancy rates, many growers find it difficult to purchase land. But the city did recently adopt an urban agriculture ordinance.

“The planning department is looking at ways to include amendments [supportive of farmers] to the master plan,” says Victoria Kovari, general manager of the Department of Neighborhoods. “We now have a deliberate planning process. We are not allowing people to build houses just anywhere.”

Sun says he would like to see the city adopt a policy that makes it easier for urban farmers to gain access to the city’s 24 square miles of buildable vacant land.

He’s also promoting a “grow first cooperative economics model” that focuses on sustainability rather than income. In a city where growers are strapped for cash, at times farming becomes a competition, with growers fighting for restaurant supply agreements, and becoming overly focused on each other’s prices. But Cole says she’s pushing for more cooperation within the city, creating a community where one grower looks out for the next.

Cole and Sun plan to expand their reach even farther across the city, possibly becoming a supplier to local food banks. Cole is also hopeful for an NOS community kitchen, where residents can learn about healthy foods, make donations, and cook and pick up meals.

“My goal is to give all the food away [throughout the city],” says Sun. “Until I give all that food away, I’m going to keep giving away in my neighborhood, and make sure people around here have access to healthy food.”