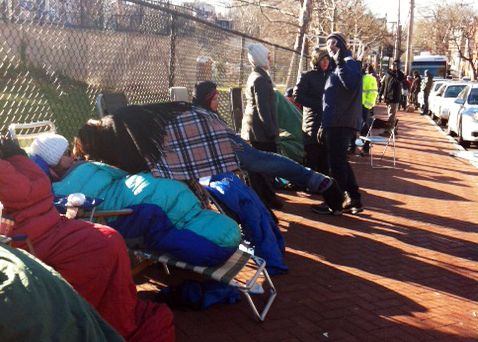 Around 8:30am on January 18, a small clutch of parents wearing thick coats, scarves and gloves were milling around the entrance to West Philadelphia’s Penn Alexander School, eyeing each other warily.

They were obviously there for one reason, but they preferred not to admit it. “We’re just talking,” they told me as I dropped my children off at the neighboring daycare. “We’re not in the line.”

“The line.” In my neighborhood, it’s a phrase that needs no elaboration. It first formed in the early morning hours of a similarly cold January morning in 2010, the same day registration applications were due for Penn Alexander, the highly-regarded public Philadelphia elementary school that has benefitted richly from the patronage of the nearby University of Pennsylvania.

The next year, the line began about 10pm the day before registration opened. By 2012, parents had queued up 24 hours in advance, camping out on the sidewalk in order to secure one of a limited number of spots in the kindergarten classrooms.

Then, inevitably, someone queued up: A grandmother, no less, sent by her son to get in line as he worked. Those milling parents tried to convince her not to start the line (but then, they not exactly heading home themselves). Eventually, she ignored their pleas, opened up her portable chair and sat down.

The line had formed.

By early afternoon, it was 70 people long. One family rolled up and parked an RV. Another built a makeshift shelter of PVC pipe and insulated wallboard to ward off the cold. Elaborate plans were set in motion. Phone trees were activated: “Have you heard? The line has started. Better get down here.” Friends and neighbors were called in to help. Some parents enlisted family members from out of state, flying them in so as to get some backup during the 96-hour ordeal.

The scene was, all at once, absurd, inspiring and enraging. On one level, the line was visual proof of the growing commitment of middle- and upper-middle-class parents to public education in big cities. But it was also a case study in the inequities that can quickly develop when a public school is deemed acceptable by a city’s professional class. As many local residents wondered: How was a single mom supposed to pull off 96 hours in line (presumably without an RV)?

That Friday evening, the School District of Philadelphia abruptly decided that the line had become untenable. District Superintendent William Hite announced that Penn Alexander admissions would be shifting to a lottery system, effective immediately. At a meeting with parents a few days later, Hite, who is new to the district, said, “quite frankly, I saw a process that was not equitable.”

It’s hard to argue with that conclusion.

Those with resources — financial, familial and social — were the first to hear about the line, and the best equipped to weather the wait. Many of those without such resources (those, that is, that hadn’t been priced out of the neighborhood already) found themselves at the back of the line, or were simply not in a position where they could realistically camp out for 96 hours.

This dilemma — creating schools that appeal to the growing professional class, without entirely displacing students with lower incomes — is hardly limited to one section of West Philadelphia. Similar dramas, sans the line, are playing out in Boston, Chicago, Washington, D.C. and in plenty of other cities with gentrifying neighborhoods.

In these communities, middle- and upper-class families with young children, families that in past decades would have fled to the suburbs en masse, are cramming into a small number of public schools that, for a variety of reasons, have been deemed acceptable.

The trouble is that demand for these schools increasingly exceeds the supply, a state of affairs that is testing the urban commitment of some parents who can’t enroll their kids in the public school they had targeted. For many of Penn Alexander’s prospective parents, Plan B is the suburbs.

“The question has been answered about whether young professionals want to live in the city. They do. The open question is if they will stay when they have children that reach school age,” said Michael J. Petrilli, a research fellow at the Hoover Institution and author of The Diverse Schools Dilemma.

Penn Alexander aside, Petrilli thinks the answer to that question could be yes. “I think we’re at a point now where there’s a critical mass of middle-class families that want to use public schools,” he said.

That critical mass could in time actually be a huge boon for urban school districts. It could lead to more economically and racially integrated schools that do better by their low-income students than they do today, and that satisfy demanding middle and upper-middle class parents.

But that hasn’t happened in Philadelphia, at least not yet. Instead, that critical mass has tried to squeeze into a handful of already excellent public schools. As Penn Alexander’s line proves, something has got to give.

If nothing else, the 11-year-old Penn Alexander experiment has proven conclusively that, under the right conditions, middle and upper-middle class parents will quite happily send their kids to public school. Indeed, they are willing to pay a big premium in real estate to do so.

In the years after the school opened, property values within its catchment soared. Between 1998 and 2011, property values in the blocks around Penn Alexander rose by 211 percent, according to the University of Pennsylvania Institute for Urban Research. The appreciation rate was three times the citywide average, and double the appreciation rate of Philadelphia’s highly desirable Center City. Realtors spoke of the “Penn Alexander premium.” Homes inside the catchment would cost as much as $100,000 more than an identical home just outside the zone.

Predictably, this rapid run-up in home values — and likely in rents as well — had a profound affect on neighborhood demographics. As reported earlier by PlanPhilly, the population of school-age African Americans within the catchment declined by 61 percent between 2000 and 2010, while the population of school-age white children grew by 101 percent over the same period.

The demographics of the entire University City section of West Philadelphia are changing, but the rate of change within Penn Alexander’s catchment has been extreme. And that’s made the school controversial. There’s an unpleasant catchment-vs-everyone else dynamic that emerges on certain occasions, and it flared up again in recent days after the line was dispersed.

Some parents who secured early spots in the queue demanded that the line be honored (though it should be noted that many others with good spots were glad to see the line go). There were vague threats of lawsuits. These complaints were met, online and in local haunts, with charges of elitism. Those accusation were in turn met with incredulity: It’s a bad thing now that middle class parents are committed to enrolling their kids in the local public school? And so on.

“Gentrifiers often feel like they’re making the city and schools better. There’s a very strong sense that they’re part of the solution, and there’s a certain frustration with being criticized,” said Maia Cucchiara, a Temple University urban education professor and author of the forthcoming Marketing Schools, Marketing Cities: Who Wins and Who Loses When Schools Become Urban Amenities.

Not that Cucchiara blames the parents of prospective Penn Alexander students for securing a good spot in line. They are doing what most parents would do.

Indeed, they are doing just as I had planned to do: Get in line as early as it took to ensure my kids got into a public school I feel I can trust. Of course, I would need to move into the catchment first (I’m a block outside of it now), but that was a price I was literally willing to pay.

“The problem is that there’s not enough good stuff,” Cucchiara said, referring to schools like Penn Alexander. “And whenever there’s just a little bit of the good stuff, the middle and upper-middle class people get it.”

The answer seems obvious enough: More good city schools. But Penn Alexander, excellent as it is, is likely not something that can be replicated on a wide scale. For one, it was built from scratch as a new school, an option that a cash-strapped district no longer has (indeed, the district is closing schools en masse, not opening new ones). Penn also pays the district a $1,300 subsidy for each student at the school, a resource other district schools just don’t have.

A more organic answer lies in the economic and racial integration of existing public schools outside the tiny handful that middle and upper-middle class white Philadelphians have deemed acceptable. The trouble with that, Petrilli said, is that “very few parents want to be the early adopters, and be the only parent with a middle class kid or a white kid in the neighborhood school. It takes a critical mass all holding hands and doing it together.”

Just such an effort is underway at Lea Elementary, Penn Alexander’s neighbor just a few blocks west, as well as at a number of other city schools. If the experience of other cities is any guide, such efforts can work. (For more on efforts to integrate urban schools, read Sarah Carr’s recent Forefront article on the growing movement of educators who consider school integration a primary goal.)

“If middle and upper-middle class families are already living in these neighborhoods, it can all happen very quickly,” Petrilli said. “You can get real class and race integration, and it can be a win-win.”

Maybe so. But it is difficult to blame parents with other options who choose not to be early adopters, as Petrilli puts it. Certainly I’m in no position to blame them. A year later, and it would have been me in that line. And already I’m considering my Plan B.