Design Public Spaces Where Americans Can Speak and Listen – Next City

Design Public Spaces Where Americans Can Speak and Listen 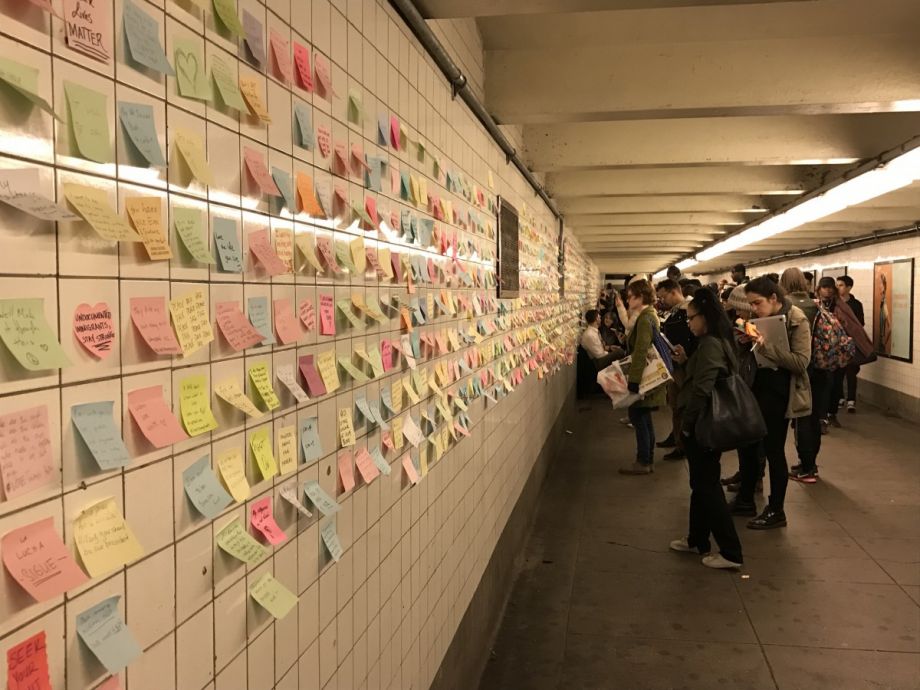 As the reality that Donald Trump would become the next American president began to sink in on the morning of Nov. 9, emails began to ping around the Gehl offices as we tried to piece our thoughts together. How could this election have been so monumentally misjudged, and what will it mean in our field of urban design for engaging public life?

Here at Gehl, we strongly believe in the power of the public realm to shape everyday life. How our streets, parks and public buildings such as schools and libraries are planned, designed and governed affects everything from how we interact with our neighbors to how — and if — we vote.

If turnout on Election Day is any indication of how the public realm is serving Americans, it’s no exaggeration to say that those of us working in public life should be gravely concerned.

In a country of 340 million people, only 120 million people cast votes on Nov. 8. Voter turnout in urban areas was exceedingly low and in rural and suburban areas, many Democrats sat out the election. Voter turnout rates dropped from 2012 in key states, including Iowa, Wisconsin and Ohio. While cities went blue as much as 59 percent and rural areas went red by as much as 62 percent, the huge number of people who chose to sit out the election indicates that both Democrats and Republicans are struggling to connect to Americans. People feel disenfranchised and do not trust “the system” in communities throughout the country. The status quo isn’t working in either urban or rural areas.

As we saw with Brexit, there are social, political and ideological divides between cities and their periphery. But it is time to stop dwelling on the divides and instead focus on the shared commonalities. Cities and the rural and suburban areas that surround them are mutually dependent, and as Matthew Lister, who leads our NYC office, says, “the lines of the electoral map make the borders between red and blue look like impermeable barriers, [but] they are lines on a map, not walls.”

Our experience as designers shows us that people, no matter if they are living in a city or far from one, want many of the same things from the public sphere: safe parks, quality cultural offerings, civic energy. For us at Gehl, these commonalities are rooted in all that Homo sapiens share — our physiology, our senses and the basic need to be social animals. The challenge for us is to honor these similarities in the way we plan and design our communities while simultaneously inviting for and celebrating difference.

It is clear to us, post-election, that a huge next step is to understand and try to incorporate all of the voices that were heard — even those of the non-voter — and invent new ways to listen. In order to move forward we must do so quickly, not only to unite through shared purpose, but also to practice what we preach and continue to invite difference of opinion through our work, even when people ideologically disagree.

This last year has exemplified how people use the streetscape as a space for expression, revolt and protest, from Black Lives Matter to Trump rallies and the current post-election protests in urban areas. The Square has always been the venue for protest and democratic expression. Today, it is even more important that our streets and public spaces be used for dialogue, and exposure to other points of view, which promotes empathy and a greater ability to coexist in our physical surroundings and institutions. Figuring out how our public realm supports these activities is a question that we at Gehl understand as being more important than ever. As designers and planners, our challenge is to understand how physical space invites for positive, constructive, in-person contact. This challenge is made all the more acute because of the physical sorting that has occurred in U.S. residential patterns during the last 50 years. In other words, we literally need places where all of America’s diverse population has a chance to show up.

We also recognize that the mood for change in 2016 is not that dissimilar from the momentum that propelled Barack Obama to the presidency in 2008. Both candidates ran on a platform of change. Change that the country is desperate for. Our understanding is that this energy for something new can be harnessed toward something positive for the public realm, rather than accentuating fear and alienation. As change agents ourselves, we will adapt and learn how to work and guide this earnest need for transformation.

Public space is the connective tissue that can hold our communities together. In big cities and small towns alike, these are the places where people create opportunities to come together and connect through shared experience.

As designers on a mission to make public places that work for people, we hope to spend the next four years helping to create more places where differences that are currently ill-defined by the stark boundaries of our electoral map can be honestly expressed, shared, challenged and more fully understood. We felt this way on Nov. 7 — and we feel this way today.

In the words of Adam Gopnik, writer and essayist for The New Yorker, “the comings and goings of politics and political actions in our lives must not be allowed to dominate our daily existence — and that if we struggle to emphasize to our children the necessities of community, ongoing life, daily pleasures, and shared enterprises, although we may not defeat the ogres of history, we can hope to remain who we are in their face.”

Jeff Risom is the managing director of Gehl in the United States.