Unreliable Trains More Hated Than Slow Ones – Next City 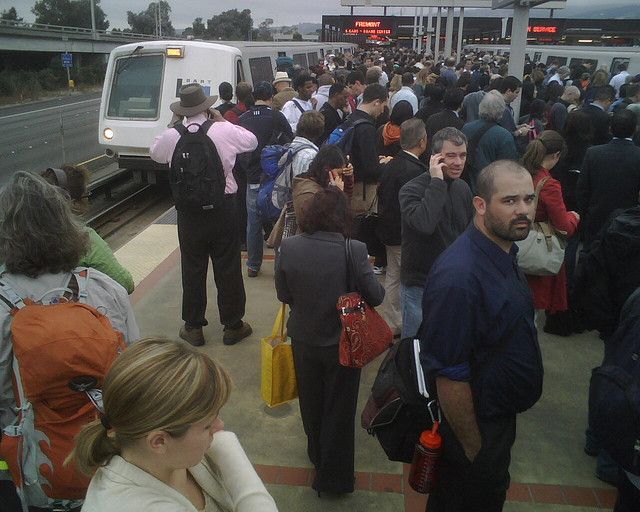 It isn’t groundbreaking to find that public transportation users would prefer their bus and train service to keep to a reliable schedule. More significant than that, though, is the idea that unreliable service trumps other factors, including commute length, when riders consider ditching public transit altogether.

A November study from researchers at the University of California, Berkeley found that inconsistent service — whether it’s lateness, inaccurate arrival info or mid-travel delays — is the number-one factor that encourages people to stop using public transit. Chief among the issues that fall under the “reliability” umbrella are long gaps between transfers and wait times exceeding 10 minutes.

Focusing on San Francisco, researchers asked what factors public transit users considered most important, finding that most would rather see their buses or trains arrive more frequently than become less crowded or offer fewer seats.

Notably, riders tended to stress that only delays perceived to be the fault of a given transportation agency would compel them to give up on transit. So, if a connecting train doesn’t show at the right time, it’s more of a deal-breaker than, say, delays due to emergencies or, in the case of buses, traffic jams.

This means that transit agencies, if they want to retain riders, should consider running buses and trains more frequently, even if it means making the vehicles or train cars smaller. Also, communication never hurts. Few things are more grating than getting stuck in a subway tunnel without knowing the reason — letting passengers know that a problem is out of the driver’s hands will make them less inclined to misplace the blame.

Real-time transit data is hot right now, and the study found that riders often turn to tools like smart phone applications to deal with unreliable service. However, smart phone owners are the most likely to forgo public transit due to unreliable service, perhaps because real-time apps make them more aware of delays. (Money may also account for this stat, given that smart phone owners tend to have greater incomes and would thus be less hesitant to spring for a car.)

The UC Berkeley study was presented at the Transportation Research Board’s annual meeting this month. You can read the full study, to the tune of $20, on the TRB website.