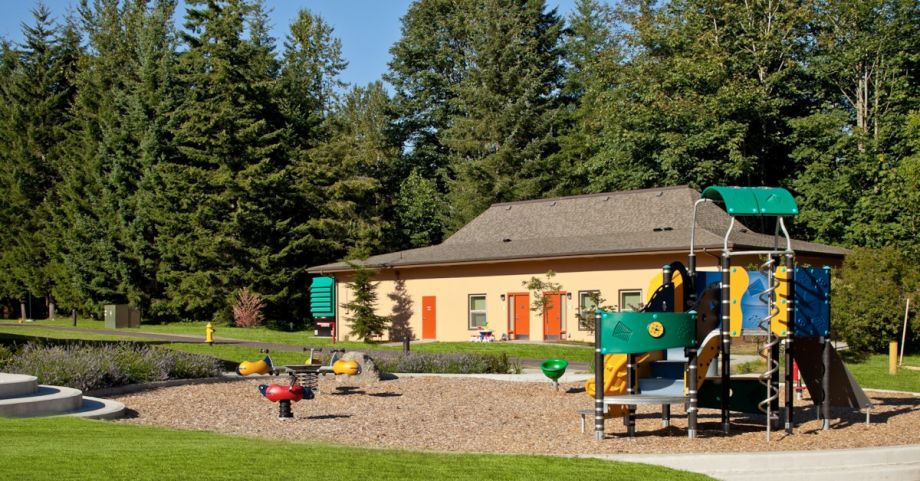 People who are released from incarceration face unique challenges to participating in society. Returning citizens have no job, little money, and no permanent place to live upon their release. They are sometimes barred from receiving public benefits or accessing public housing. Private landlords and employers may discriminate against them because of their criminal histories. And personal and family relationships may take work to repair.

“When folks go to prison for their crimes, they’re still punished once they come out of prison,” says Jeanice Hardy. “Society itself is not forgiving.”

Hardy is the regional director of family services for the YWCA in King County, Washington. Since 2011, YWCA Seattle King Snohomish, in partnership with the King County Housing Authority, has operated a unique housing project called Passage Point, which provides transitional housing for single parents who are being released from correctional facilities and seeking to reconnect with their young children. The complex includes 46 units of housing, with support services to help residents find work, rebuild relationships with their children, address mental-health challenges, and plan for permanent housing. Residents stay for up to two years. As of early December, according to Kristy Johnson, director of homeless housing initiatives for the King County Housing Authority, there were 97 residents at the Passage Point complex, including 53 children.

The story of Passage Point starts well before the complex was actually opened in 2011. The site, which sits at the top of a hill in Maple Hills, Washington, was opened as a residential alcohol treatment center in the 1960s. In 2002, Stephen Norman, executive director of the King County Housing Authority, heard on the radio that the facility was closing, and called the county executive to talk about how the site could be reused for a public purpose. Norman says he had worked on a program in the late 1980s, with Mother Hale in New York, that was designed to help reunite mothers struggling with substance abuse with their children. The county was interested in supporting a transitional housing program for mothers leaving prison, Norman says. So the county and the housing authority issued a request for proposals, and selected the YWCA, which had already been providing housing in scattered sites, as the nonprofit partner to manage Passage Point.

“It took probably six years to seven years to take this from a vision, through a variety of challenges, to get the place extensively rehabbed and reconfigured, and the Y did a terrific job in moving that forward,” Norman says.

The King County Housing Authority uses project-based vouchers through the Housing Choice Voucher program to help subsidize rents at the Passage Point complex. The program targets tenants who have been released from incarceration in the last 12 months, who have a child or children under the age of 18 and “a reasonable chance to reunite with that child or children,” according to a pre-screening form. Working with the Department of Corrections, the YWCA meets with certain incarcerated people whose sentences are almost over to start building relationships with prospective tenants.

According to the YWCA, residents are mostly mothers, and the project has maintained between 6.5% and 18% of its units as father-led households. Some two-parent households also reside in Passage Point units, with the formerly incarcerated parent applying for housing and the co-parent required to meet the same income and criminal background check qualifications.

There’s more demand for this type of housing than Passage Point can meet, just like there’s more demand for public housing and affordable housing in general than there is supply. The King County Housing Authority, like other authorities, has a long waitlist for housing units or a Section 8 voucher, and Passage Point has a waitlist of its own. As part of an “exit strategy” included from the outset, the housing authority also gives some priority on its own waitlist to residents who are leaving Passage Point and need subsidized housing.

The YWCA says it doesn’t track its former residents’ long-term outcomes. But the support they receive while they’re living at Passage Point is unlike services they might get elsewhere, says Patricia Hayden, chief program officer of King County services for YWCA.

“Most of the individuals that are coming out of incarceration do not have the family networks anymore,” Hayden says. “They may lack education and skills. They need parenting resources … There’s a lot of disconnect that we take for granted as people who are outside of the criminal justice system. And those relationships have to be restored and built, and Passage Point does give them the opportunity to do that with support on site.”

In many areas, people with criminal records are regularly barred from accessing public housing. The Passage Point program is one of a small handful of public-housing programs designed specifically for returning citizens. In 2016, the Department of Housing and Urban Development highlighted the program in a report on housing authorities helping provide “second chances” to people being released from incarceration. Other programs highlighted in that report include the “Offender Re-Entry Housing Program” run by the Burlington Housing Authority and the Vermont Department of Corrections, and the New York City Housing Authority’s Family Re-Entry Program. A spokesperson said that the program has reunited 165 formerly incarcerated people with their families in public housing, and in the last five years, five program participants have been convicted of new offenses.

Officials with the Burlington Housing Authority said they would not grant an interview or answer questions about their program.

Johnson says that the King County Housing Authority and the YWCA often hears from other housing authorities that are looking to create programs that are specifically targeted to returning citizens. But he doesn’t know of any other site like Passage Point. Funding is a challenge to scaling up programs like it, but so are the basic politics of affordable housing development. Some neighbors initially opposed the development of housing for returning citizens at the Passage Point site, and Norman says it may not have succeeded if it hadn’t already been a social service facility. The residents and staff still sometimes face discriminatory attitudes from the surrounding community, says Hayden.

Evictions from Passage Point have been very rare and mostly connected to substance abuse, Hardy says. In addition to the services offered onsite, residents benefit from building community with one another, taking care of each other’s kids, and helping each other build confidence, she says.

“People come to Passage Point because they’re inspired to change their lives,” Hayden says. “For the most part, that’s why people are there. They’re not paroled there, they’re not forced to come, they’re there because this is a personal choice that they have made, and we are humbled to be able to provide them with that opportunity.”

This article is part of Returning Home, a mini-series about housing after prison. Returning Home is generously underwritten by Just Cities. We have updated the article to correct Kristy Johnson’s title, Patricia Hayden’s title, and a few typos.