Understanding Detroit, with a Little Help from Whitman – Next City

Understanding Detroit, with a Little Help from Whitman 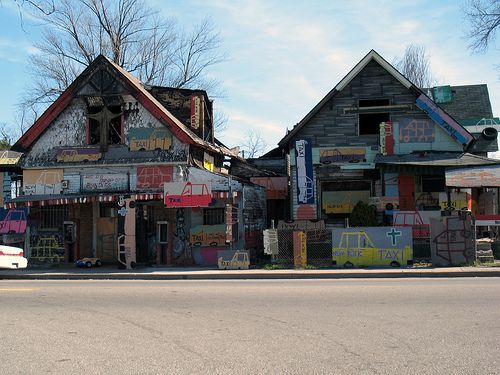 These colorful houses are part of the Heidelberg Project, a project which uses art to improve Detroit neighborhoods. jbcurio

Detroit is exposed, and it’s not the weed-wrecked, shriveled city I expected. The city shows muscle beneath a film of high unemployment, failing industry, and vacancies. A recently published report by the Detroit Data Collaborative reveals the real condition of the city’s residential areas, finding that there is more to this market than a 35 percent vacancy rate. The report, a joint effort of the Detroit Office of Foreclosure Prevention and Response, Data Driven Detroit, Community Legal Resources, Living Cities, and the Edward Ginsberg Center at the University of Michigan, found that occupied housing in Detroit is well-maintained and thriving in spite of the overwhelming percent of vacancies. 93 percent of occupied housing in Detroit is in good condition, 7 percent is in fair condition, and a mere 1 percent is in poor condition.

The stark duality of these findings brings Walt Whitman’s words to mind: “Do I contradict myself? Very well, then I contradict myself, I am large, I contain multitudes.” Detroit has room enough for strong and weaker residential communities. Stable residential areas are not diminished by areas with high vacancy rates; rather, both types of spaces define the city for residents and visitors.

Maps of the data show distinct spatial vacancy patterns across Detroit’s census tracts. Residential areas to the north and east of the Cities of Highland Park and Hamtramck have some of the city’s highest vacancy rates, with 19.56 percent to 60.06 percent of homes vacant. Middling vacancy rates pan out horizontally across Detroit’s center. Census tracts with low residential vacancy are clustered about the city’s edge, separated from high vacancy areas by intermediary regions.

City planners, community groups, and proud Detroiters have reason to laud this report. The data allows for targeted remediation and investment efforts by revealing the wide spectrum of neighborhood conditions. It furthers community development and empowerment by providing information at the block level. Communities can assess the vacancy rate in their area and work to restore unoccupied homes or prevent the spread of vacancies. Just as importantly, the report gives Detroiters a much needed ego boost. Detroit’s residential market is, in fact, doing well — in part.

With its clearly demarcated maps, pie charts and graphs, the Detroit Data Collaborative’s transparent and accountable report will undoubtedly be the basis for careful revitalization efforts by giving national and local organizations the tools — or at least the maps — to implement innovative ideas. A Freep.com article mentions the possibility of turning unoccupied residential parcels into urban farms. Detroit is also a target of the shrinking cities movement, or the notion of right-sizing a city for its declining population. This can mean two things: First, much of Detroit’s existing infrastructure may be demolished or, existing, discarded structures might be put to new and innovative purposes. Already, unused bank buildings have been reinvented as churches and art exhibits frame dilapidated areas. For example, Tyree Guyton, founder of the Heidelberg Project, installed gigantic, colorful art sculptures in and around empty lots on Detroit’s Heidelberg Street in the late 1980s and continues to use art to improve lives and neighborhoods in the city .

Ultimately, Whitman provides a working framework for Detroit’s character. Exposed, Detroit is weakened by its high vacancy rate but also confident in its revitalization efforts and strong residential communities. This is a refreshing contradiction for a city that, indeed, “contains multitudes.”