By 2030, “The Doctor Will See You Now” Could Be a Universal Greeting – Next City

By 2030, “The Doctor Will See You Now” Could Be a Universal Greeting 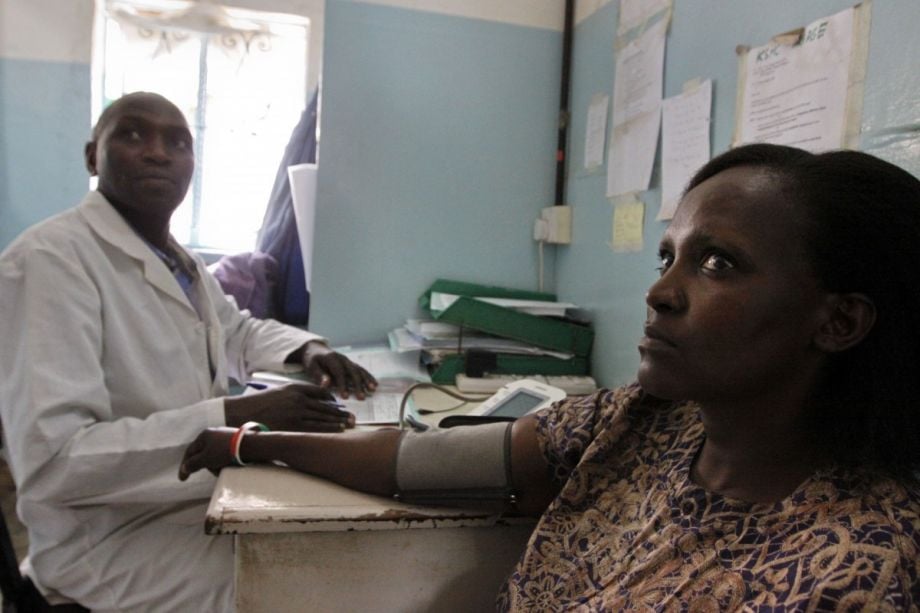 Doctor and patient at a Medecins Sans Frontieres clinic in the Kibera slum of Nairobi, Kenya (AP Photo/Khalil Senosi, File)

At the end of September, the UN unveiled its new list of development goals at the Sustainable Development Summit in New York. For informal workers in developing cities, the plan offers something substantial: health insurance.

The Sustainable Development Goals (SDGs) are a list of 17 aims for global development. The targets range from education to healthcare to climate change, with many focusing on the world’s most impoverished and vulnerable people. The SDGs replace a previous list, the Millennium Development Goals, in use from 2002 to 2015, which prompted a surge in awareness of global inequality and catalyzed efforts to fight it.

On health, the new list includes a succinct but sweeping mandate: “Ensure healthy lives and promote well-being at all ages.” Among the nine points that come beneath that heading, several key targets are already well underway. Take this drily phrased but vast ambition: “Achieve universal health coverage, including financial risk protection, access to quality essential health-care services and access to safe, effective, quality and affordable essential medicines and vaccines for all.”

In practice, “financial risk protection” means health insurance, the thing that helps people avoid catastrophe-sized bills when medical disasters strike. Accordingly, the Sustainable Development Summit also saw the publication of “Going Universal,” a World Bank report on programs in 24 developing countries that “have made substantial efforts to strengthen coverage of health care services … with a special focus on the poor and with the overarching objective of attaining UHC [universal healthcare coverage].”

Collectively, the two dozen programs serve one-third of the people on Earth — many of whom are informal workers, who, by dint of their employment outside of formally registered businesses, lack access to employer-sponsored health insurance. By advocating in its report for “an expanded mandate to include the nonpoor informal sector” (as well as “the poor and vulnerable”), the World Bank is echoing a concept Americans will find familiar. The ethos is a near-echo of the Affordable Care Act, whose personal coverage has been credited with giving Americans flexible options for health insurance irrespective of employment status.

Most of the programs have been in operation for years. “There are several of us here who have been at the work of strengthening healthcare systems and advocating for it for a good couple of decades,” noted surgeon-author and advocate of the ACA and global healthcare Atul Gawande during a summit press conference.

The World Bank’s findings give a clue to what’s in store for those who will now put themselves to tackling the SDGs. Looking at Kenya’s universal healthcare program — launched in 2010 and intended to help workers in communities like Kibera, a massive slum in Nairobi — “Going Universal” notes: “Despite the new UHC programs, out-of-pocket expenditure at the point of service by households remains a prominent source of overall health system financing in most [studied] countries.”

The statement is powerful: It means that, in effect, insurance is not operational for many people in Kibera.

Enid Kanini Nthiga says what’s true across the city is also true for her. A married woman in her mid-thirties, Nthiga invited me into her home when I visited Kibera this summer. She lives with her husband and two children in a single, shed-like room along a train line. She said that she and her husband make middle-class wages, but spend much of it educating their children.

Perched at the edge of her community sits the large Mbagathi Hospital. Nthiga showed me a laser-printed ID card with her name and image, proof of her health insurance membership, which would theoretically ensure her adequate access to care there. But asked about the impact of the card on her life, she upended her hands in a gesture of emptiness.

A UN case study on Kenya found that the country’s UHC program, the Health Sector Services Fund (HSSF), offers a means for the Kenyan government to redirect funds to health facilities in need. The program doesn’t directly insure Kenyans, but rather aims at ensuring that insurance is matched with suitable supply — in other words, that Nthiga and her family can use their health insurance cards to access adequate care. But although the UN report describes a program that has been in place for several years, it concludes, “It is too early to assess the impact” on healthcare access or patient expense.

The SDGs will remain in effect for 15 years, and like many of the previous MDGs, the goal of universal health care might be ambitious enough to take the full span to achieve. In fact, “Going Universal” says that to achieve it at all will involve automatic enrollment of all people, informal workers or not, into mandatory national insurance programs. “There is abundant evidence that voluntary insurance is not a viable path to UHC,” the report reads, arguing in favor of a global plan to implement national insurance programs. (“It is, however, a useful stepping stone,” it notes, adding that many countries will require temporary programs before a comprehensive system is in place.)

Whatever the path, enshrining the goal of universal health care into the SDGs is likely to spark an influx of attention and aid money — just as many of the MDGs, the previous set of goals, garnered far more attention after international players organized, legitimated and added ambitious mandates to them.

The UN, World Bank and other international actors in global health appear to be banking on that upswing in attention. Keynoting a press event on September 26th, United Nations leader Ban Ki-moon said, “I am confident that with the leadership here today and the initiatives discussed, we will have the imagination and the political will to create a true and lasting global architecture for a healthy future.”