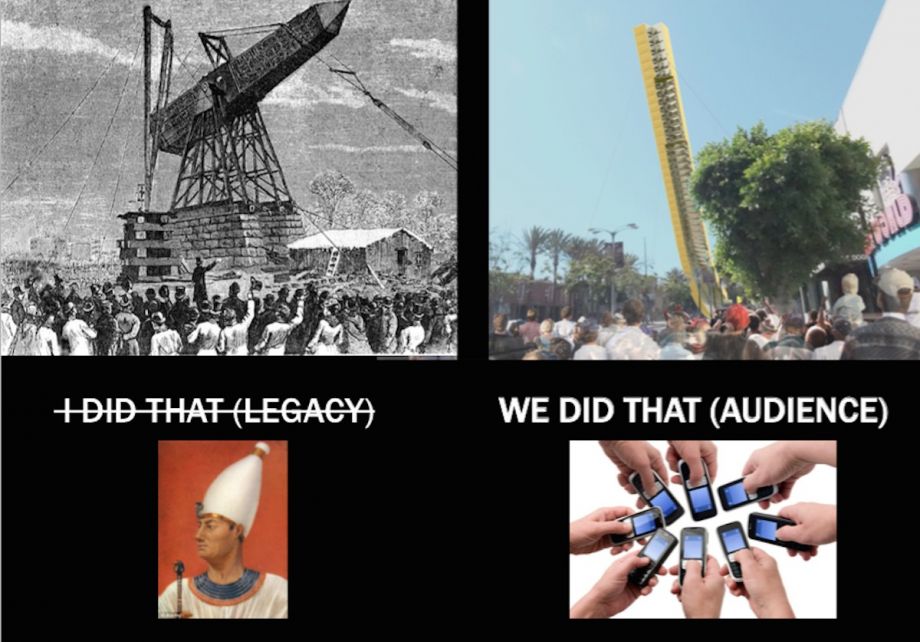 Architect Roger Sherman envisions a crowdsourced building of a giant structure in the Westwood neighborhood of L.A. (Credit: Roger Sherman)

Victor Hugo said, “The book will kill the building.” Roger Sherman, architect and co-director of UCLA’s cityLAB, wants to ensure the smartphone doesn’t kill the city.

“It will rob the city of its signage and its content,” Sherman says of the seemingly ubiquitous communications device, citing the portrayal of an eerily blank city in the movie Her as an accurate vision of the future. “It feels like a strange float-to-relax immersion tank.” Sherman says, “It’s frictionless, nobody bumps into each other.”

In other words, if everyone prefers to connect via iPhone, our public spaces could be rendered obsolete simply because they can’t be everything to everyone. As an analogy, Sherman points to the transition from TV’s old, three network channels to Internet TV’s programming specialization.

“There’s no one huge audience sitting out there,” he says. “The population has fragmented into increasingly large numbers of individual subcultures. So how can you possibly conceive of a civic space that’s going to attract as much of an audience? Look at NBC’s ratings.”

To preserve the physical togetherness critical to community-driven cities, Sherman envisions using a combination of smartphones, crowdsourcing and the spirit of wonderment.

Inspired by the smartphone’s unique ability to both “summon and broadcast collective action,” Sherman is asking, “How can we make smartphone technology as a crowdsourcing, city-building tool? How can we use it to re-enrich the city?”

The smartphone’s impact on urban life has thus far been superficial — mostly matters of convenience. But Sherman sees a potential crux of smartphones and cities far beyond convenience. He calls his strategy the “feat,” and it may just represent the future tool for preserving civitas in an age of social hyper-fragmentation.

The “Event” has replaced the “Monument.” Where we once built spaces meant to support one purpose forever, like libraries and racetracks, we now close down highways for bike races and build temporary library-towers in parks. We build entire cities in the desert for a week. Structure has become secondary to experience. And it makes sense — when social interactions bubble up from anywhere and an entire city is accessible in your pocket, spaces become more dynamic and thus secondarily significant to the happenings inside of them. A feat is a type of event that promotes cooperative, crowdsourced city building.

Sherman insists that for a feat to transpire, there must be a Trojan Horse, a stone for the stone soup, even a bit of conceit to attract people. “It’s the opposite of the Field of Dreams model,” Sherman explains, “It’s not ‘build it and they will come. It’s come and they will build it.” But a feat is not a hoax, because it categorically becomes fulfilled.

The elements of a feat include a challenge requiring collective effort; a “cunningly staged” solution; participation for its own sake; immersiveness that precludes reproducibility in photographs; and wonderment that procures incredulity. The last ingredient is what Sherman calls “gawkability.” Something that’s “gawkable” has the quality of a monument (think Chicago’s Bean) that compels people to pose with and bear witness to it; you could also call this element “Instagramability.”

If you’re still not sure you’ve grasped exactly what a feat is, you might be trying too hard. It’s just something synergetic and its elements alone are abstract. But more or less, it’s something magnificent that happens that a bunch of participants collectively achieve for the sake of being there when it happened. “This goes beyond the selfie,” Sherman says. “It’s having to meet people and work with people you didn’t know before to achieve something awesome that you can’t achieve yourself.”

Sherman has designed a yet-to-be-realized feat for L.A.: People register ahead of time for a mysterious six-week festival that will occur in Westwood. The day it starts, a citywide scavenger hunt begins for 72 giant, yellow, inflatable puzzle pieces. When someone finds a piece, they will tweet its location, signaling to an actuator that will instantly inflate the piece. Then, as people transport the pieces on flatbeds of trucks or strapped to the tops of cars, they generate buzz through the city.

Westwood has a reputation as a fragmented, contentious neighborhood and Sherman intends the feat to foster interaction and cooperation. In two-week increments, the festival will involve three “challenges” to build giant structures with the puzzle pieces. Teams will be led by local businesses, fraternities and sororities, nonprofits, and other community organizations that otherwise act as community silos. Nobody knows what the structures will turn out to look like, and the teams must work together to complete the challenges. The pieces will play songs triggered by certain tweets, and participants will join pieces by meeting other participants whose pieces play the same songs. The songs change for every challenge, continuously mixing the pot of participants and demanding more coordination. “That’s the Trojan Horse part,” Sherman says, “They’re having fun but there’s actually a lesson.”