Why Uber and Cities Should Give Peace a Chance – Next City

Why Uber and Cities Should Give Peace a Chance 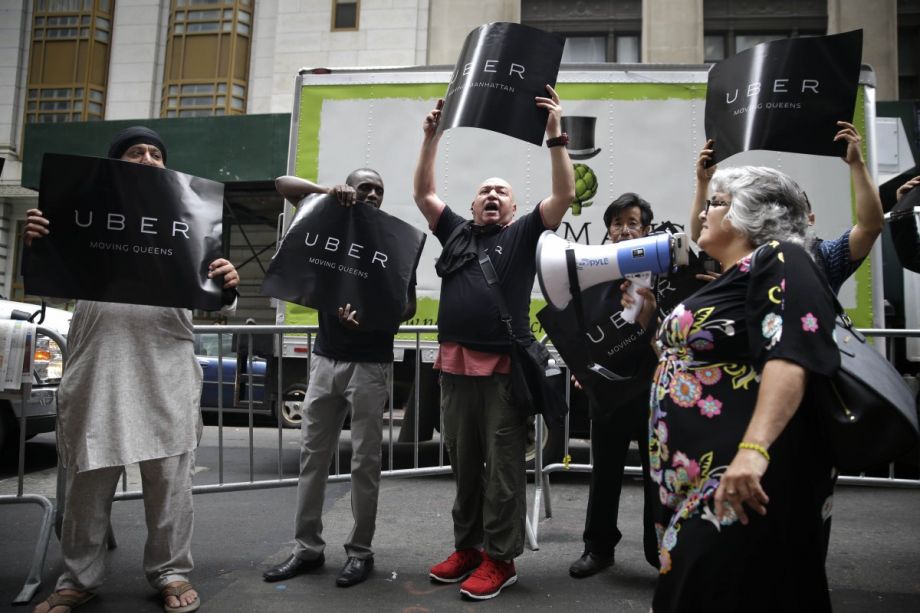 Uber drivers and their supporters protest in front of the offices of the Taxi and Limousine Commission in NYC in 2015 in response to the city's efforts to regulate ride-hailing services. (AP Photo/Seth Wenig)

Many U.S. cities have been engaged in combat with Uber and Lyft since the companies first swept into town months, or even years, ago. From background checks and license requirements to employment and insurance issues, the battle lines between the public and private sector have been drawn and redrawn.

As ride-sourcing services mature and become part of the urban fabric in many regions, however, it has begun to seem possible that common ground — and even direct partnership — could be within reach. The idea of Uber and cities working hand-in-hand may strike some as odd. But, in the words of Elvis Costello, “what’s so funny ‘bout peace, love and understanding?”

Especially considering that new research conducted by the Shared-Use Mobility Center (SUMC) on behalf of the American Public Transportation Association suggests transit and ride-sourcing services are largely complementary, with each serving different purposes and working together to enhance overall urban mobility.

Most Ride-sourcing Trips Take Place Late at Night, When Transit Isn’t Running
SUMC’s analysis — which draws from several sources, including a survey of shared mobility users and an analysis of publicly available Uber data in seven cities — shows that ride-sourcing services are most frequently used between 10 p.m. and 4 a.m., times when public transit runs infrequently, or is unavailable altogether.

When asked about when they used various modes of transportation, survey respondents indicated ride-sourcing was the least frequent choice during weekday mornings and evenings, while transit remained the mode of choice for daytime trips and the most commonly used shared mode overall.

The fact that each mode serves different trip types suggests that they are not competing directly for customers. But more importantly, it shows how multiple transportation options — including bike-sharing, car-sharing, ride-sourcing and micro-transit ​— work together to create a robust mobility ecosystem that makes it easier for residents to get around without a car, regardless of the time of day or night.

Ride-sourcing Is for Social Trips, While Transit Serves Commuters
SUMC’s research also shows that ride-sourcing is primarily used for social trips, not the long-haul commutes that have traditionally been the mainstay of public transit.

More than half of the survey respondents indicated that they had used ride-sourcing for a recreational or social trip within the last three months. Only 21 percent said they had used it to commute. And, among those who had, responses indicated their use was often situational — such as when running late, or attending an off-site meeting — as opposed to a daily occurrence.

At the end of the day, no other mode can rival mass transit’s ability to bypass congestion and efficiently move large numbers of people through dense urban areas. Additionally, new forms of shared mobility like bike-sharing and ride-sourcing can help transit by providing first/last mile connections to get riders to and from their bus or train.

Ride-sourcing Replaces Driving Trips
Public transit and ride-sourcing services like Uber and Lyft can also help each other in the fight against a common enemy — the single occupancy vehicle trip.

In listing alternatives if their preferred mode was not available, survey respondents clustered into two groups: those with active, transit-centered lifestyles and those whose travel relied more on private autos. Those who prefer ride-sourcing tended to be more automobile-centered, with 34 percent reporting they would drive alone or with a friend if ride-sourcing was not available, 24 percent saying they’d use car-sharing and only 14 percent saying they’d ride a bus or train instead. Some 8 percent of ride-sourcing users selected the “other” option, and all but one of these open-ended responses mentioned using taxicabs.

This evidence further suggests ride-sourcing is not substituting for public transit trips, but rather for private auto trips or taxi rides. Moreover, these users are more likely to have access to a personal car, and the availability of ride-sourcing gives them a way to leave that car at home more often.

Give Peace a Chance
While ride-sourcing services and public transit already often complement one another, both the public and private sectors have much to gain by more formally aligning their services, such as through fare payment integration, first/last mile partnerships and pilot projects to improve services like paratransit.

We realize that ride-sourcing companies still have pressing issues that must be addressed before they can become bona fide partners, such as resolving lingering workforce questions, doing a better job of serving passengers with disabilities and sharing data to help cities plan for and manage demand. On the public side, cities must also do their part to bring all parties to the table and ensure that the public’s interests are well served.

But, especially in light of evidence that ride-sourcing and transit work well with one another, we say it’s time to give peace a chance. Together, mobility providers and cities can help reduce reliance on private autos, lessen traffic congestion and harmful emissions, and expand access to transportation, opportunity and a better quality of life for all residents.

Sharon Feigon is executive director of the Shared-Use Mobility Center, a public-interest organization working to foster collaboration in shared mobility and extend its benefits for all through piloting programs, conducting research and providing advice and expertise to cities and regions. She previously served as CEO of Chicago’s IGO Carsharing. Under Sharon’s leadership, IGO grew from a small pilot into a successful operating company with 15,000 members in 45 neighborhoods. Prior to taking the helm at IGO, Sharon was Director of R&D at the Center for Neighborhood Technology, where she specialized in developing innovative, market-based solutions to the problems of urban sprawl.