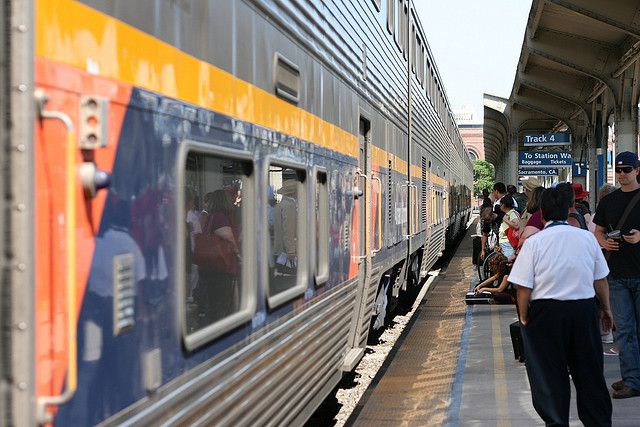 Amtrak did relatively well on the American Society of Civil Engineers’ infrastructure report card. Other U.S. public transit, not so much. Credit: Richard Masoner on Flickr

The American Society of Civil Engineers made a splash on Tuesday when it released its first report card for American infrastructure since 2009.

This means that as a nation, we’re straddling the line between “poor” and “mediocre,” so, uh, don’t go rushing home to show Mom and Dad. But as others have pointed out, the grade actually represents an improvement — last time around, we scored a measly D.

As such, most media coverage of the ASCE report has followed a common line: Infrastructure in the U.S. still largely sucks, though it has gotten a little bit better in four years. Yet the picture remains grim, as the ASCE estimates that $3.6 trillion worth of investment would be needed to bring infrastructure up to par by 2020. At the moment, funding for infrastructure repair stands at about $2 trillion.

All in all, a fair assessment. When broken down into categories, though, we can see exactly where the nation’s infrastructure has shown signs of improvement and where it continues to lag, so as to understand where to funnel whatever money we do end up dedicating to upkeep and repair. (Only in one category, “solid waste,” did we score above a grade of C — and just barely at that. So at least our trash system is kinda adequate, right?)

For now, we’d like to go into two particular categories that caught our eye: Rail and transit.

Let’s start with the relatively good news. Rail infrastructure, which per the ASCE includes both freight and intercity passenger rail (aka Amtrak), rose half a letter grade, from C- to C+.

On the passenger end of the equation, Amtrak is actively trying to make the necessary investments to reach a “state of good repair” — meaning existing equipment will function as designed and be regularly maintained — within 15 years. For one, it plans to put about $10 billion into the Northeast Corridor, by far its most traveled route, and shoot for a 40 percent increase in train capacity. The ASCE cites Amtrak’s Capitol Corridor, running from the Bay Area to about 30 miles northeast of Sacramento in northern California, as a particular success story. That route has seen a more than 250 percent growth in ridership since 1997.

Amtrak — which, interestingly if predictably enough, owns only 730 miles of the 160,000-mile national rail network — recorded a record-high 31.2 million passengers last year, gains due in no small part to investments that have led to a better on-time performance. With help from federal funding sources like TIGER grants and the Passenger Rail Investment and Improvement Act of 2008, it looks like Amtrak will continue to expand and, possibly, maintain the tracks needed to handle increasing ridership.

Transit that doesn’t fall under Amtrak’s purview fared much worse on the ASCE’s report card, earning a D and therefore pulling down the nation’s overall lousy-to-begin-with G.P.A.

Public transit ridership increased by 34 percent between 1995 and 2011, according to the American Public Transit Association, and the ASCE report states that access to transit across the country has grown by nearly 10 percent. Although transit investment has also increased, “deficient and deteriorating” regional transit systems cost the national economy $90 billion in 2010.

Of course, the state of transit can vary by city or region. States in the Northeast and West enjoy far better transit access, generally, than their counterparts in the South.

Rail accounts for about one-third of all transit trips but is responsible for the most maintenance costs, with a backlog of $59 billion. Buses, meanwhile, carry more than half of all transit riders — and also carry the distinction of tending to be in “barely adequate” condition.

“Just as troubling as the maintenance backlog,” the report states, “is the fact that many transit agencies do not systematically monitor the conditions of their facilities to keep their fleets in good and consistent operation.”

Bringing the conversation back to money, the Federal Transit Administration estimates that it’s looking at a $25 billion-per-year funding gap, which is only expected to grow. The FTA did give out $48 million in grants to 31 transit agencies in 2010 and 2011, but that hasn’t made much of a dent given there’s 650 different agencies across the country.

To bring the country’s public transit up to a “state of good repair,” the FTA estimates it would need $78 billion. This makes most instances of federal largesse, like the $4 billion set aside for transit in the American Recovery and Reinvestment Act, seem puny.