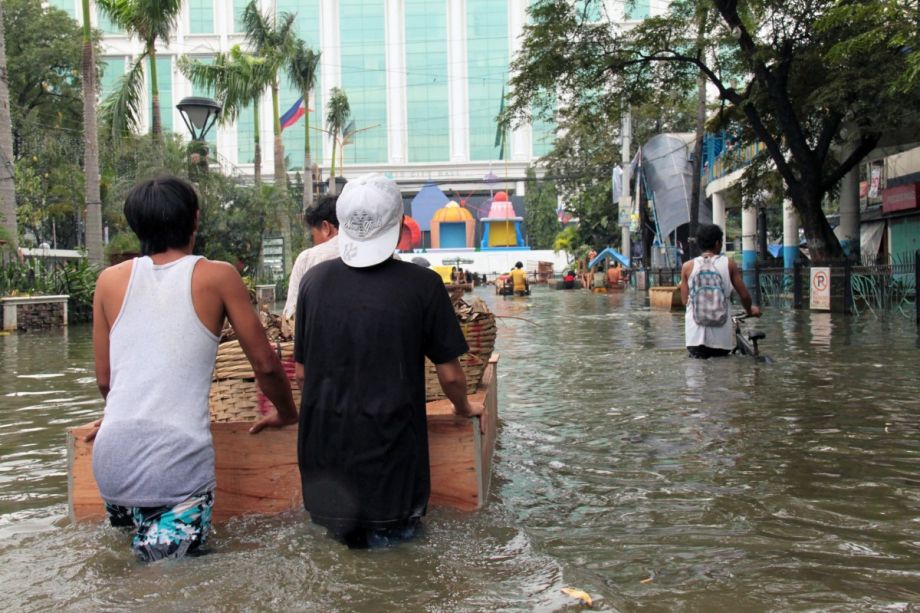 After Typhoon Ondoy, Filipinos began to realize they can’t just focus on disaster recovery after the fact. Photo credit: Department of Foreign Affairs via Flickr

It’s the start of the annual rainy season in the Philippines, and for the slum dwellers of Potrero, that means bracing for the unknown.

While climate change may seem like an abstract concept to much of the developed world, in the riverside slums of Manila, it’s already playing out in the worsening storms that hit with ever-more frequency.

Marieta Alcid is the executive director of Accord, an organization that helps vulnerable communities prepare for typhoons and floods. Part of her job is to solicit “disaster histories,” which amount to an oral record of climate change. And the story they tell is one of real, rapid transformation.

For decades, the people of Potrero bore the annual rainy season with a combination of experience, prayer and a seemingly limitless capacity to endure hardship. “For them,” says Alcid, “a chest-high flood is shallow.” But in 2009, Manila took a direct hit from Typhoon Ondoy, which butted up against the seasonal monsoon to flood the city to the rooftops for days. An estimated 710 people died.

In Potrero, the flood waters rose with a speed and ferocity the residents had never seen. The slum is surrounded by the walls of an upmarket subdivision, and their tried-and-true system of grabbing a ladder and climbing over the wall didn’t work — fast currents swept away their stuff before they could act. Stuck inside what seemed like a quickly filling aquarium, they banged out holes in the wall, squeezing their way through to safety.

So what exactly do you do when faced with the unknown? For Alcid, the solution is to create systems. Filipinos have traditionally dealt with storms in the aftermath, focusing on recovery and reconstruction. But now, typhoons have become so strong and frequent that simply picking up the pieces is no longer feasible. In November, Typhoon Haiyan left at least 6,300 dead, 1,061 missing and 28,689 injured. Damage to property topped 90 billion pesos ($2 billion). It has become painfully obvious that waiting to act after a disaster is unsustainable, and Accord is taking this opportunity to stress the need for better preparation.

The group has been working with Potrero for the past several months to create a systemic plan that culminated in the community’s first flood drill this June. The organization helped residents come up with an early evacuation plan that identified routes and suitable shelters, and countered cultural resistance to evacuating. (Sometimes neighborhood officials resist evacuation calls because they’re reluctant to take on the responsibility of feeding everyone that comes to a shelter in an already poor community.)

Accord also helped buy six outrigger boats to rescue stranded residents, and stocked up on life vests and lifesavers. They set up the neighborhood with a three-tier sound system, with different sirens to signify a flood alert, a ready warning and final evacuation.

The also formalized disaster preparedness positions for neighborhood council members, so everyone knows exactly who is in charge of search and rescue, relief, medical, evacuation center management and security. During the flood drill Accord hid a child for security to find, and had someone pretend to faint to test the medical team’s mettle.

Everything is new. “They are anticipating a scenario that they have never experienced before,” Alcid says. “I don’t know if they’re prepared yet, but certainly they’re aware. I’m not confident. I’d rather strive harder and have people prepare more.”

A neighborhood of slum-dwellers can do very little to stop climate change (their carbon footprint is already tiny — they’d be lucky to have regular electricity). By replacing intuition with systems, Alcid hopes that the unknown isn’t met with panic and casualties.

This rainy season will be the first test for Potrero. If it works, Accord will adjust and scale up the system to the many other vulnerable neighborhoods in Manila.