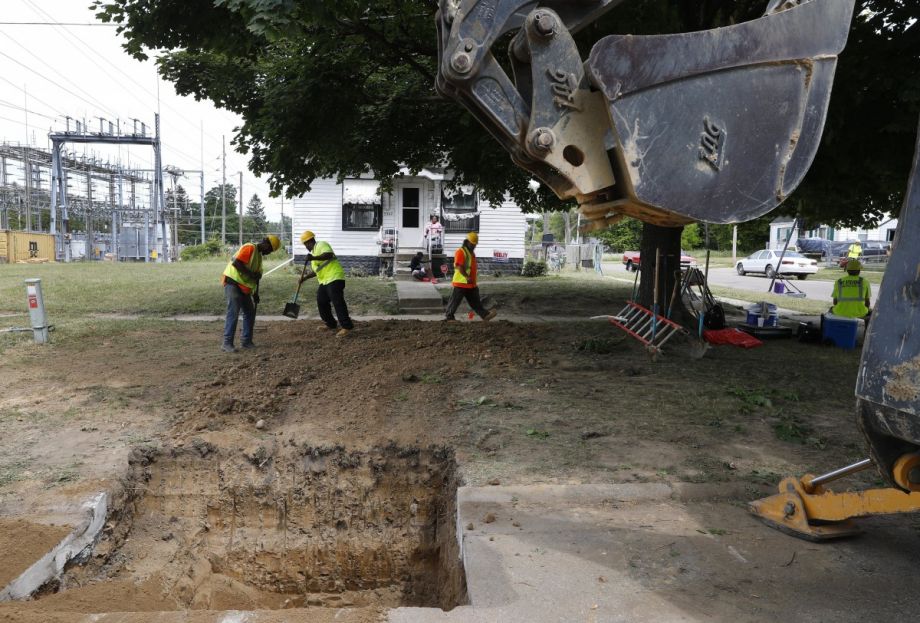 The Flint water crisis still looms over the embattled Michigan city. In this July 20, 2018, file photo, workers back fill a hole used to replace lead pipe with copper water supply lines to a home in Flint, Mich. The Michigan Department of Environmental Quality sent a letter Wednesday, July 25, 2018, to the city's chief financial officer saying that Flint has only drawn 17 percent of the $167 million in federal and state funds available to cover lead service line replacement following the city's lead-tainted water crisis. (AP Photo/Paul Sancya, File)

Two Michigan officials have pleaded no contest to misdemeanors related to the Flint water crisis in exchange for more serious charges being dropped, the Associated Press reports.

Both men had been charged with felonies, including involuntary manslaughter, but those charges will be dismissed under their plea deals.

The deals require the two men to cooperate with law enforcement, including to testify against other Michigan officials, MLive reports. That could include the involuntary manslaughter case against Michigan Department of Health and Human Services director Nick Lyon, the highest-ranking government official facing charges.

The Flint water crisis began in 2014 when the city began to use water from the Flint River rather than treated Lake Huron water. The biggest concern was elevated levels of lead leaching from lead pipes, but the water also had elevated levels of trihalomethanes, chemical disinfectants that can cause health problems, and the water switch was linked to a rise in E. coli bacteria and possibly an outbreak of Legionnaires’ disease, which killed at least ten people.

Lyon’s manslaughter charge is linked to the Legionnaires’ deaths, with Judge David Goggins saying that he failed to issue a timely alert to the public. Busch has testified that he told Lyon about elevated levels of legionella bacteria “many months” before Lyon and Gov. Rick Snyder announced the outbreak publicly.

An additional 12 current or former state and local officials have been charged with crimes related to the lead in the drinking water or Legionnaires’. In addition to the pleas from Busch and Prysby, another four have agreed to misdemeanor plea deals, USA TODAY reports. Former Flint emergency manager Gerald Ambrose has been offered a plea deal that would require him to plead guilty to a felony, MLive reports. Ambrose is facing charges of false pretenses, conspiracy to commit false pretenses, willful neglect of duty and misconduct in office, but special prosecutor Todd Flood said he’s offered to drop all but one charge in exchange for his cooperation in other cases. The deal is unlikely to be accepted or rejected for a few months, MLive said.

Prysby and Busch will be sentenced Jan. 23. Prysby’s misdemeanor carries a maximum sentence of up to one year in prison, and Busch’s up to 93 days, but none of the other Michigan officials to be charged in connection with the water crisis have served any time. The AP reports that the charges for both men will likely be dismissed in a year if they continue to cooperate with law enforcement.