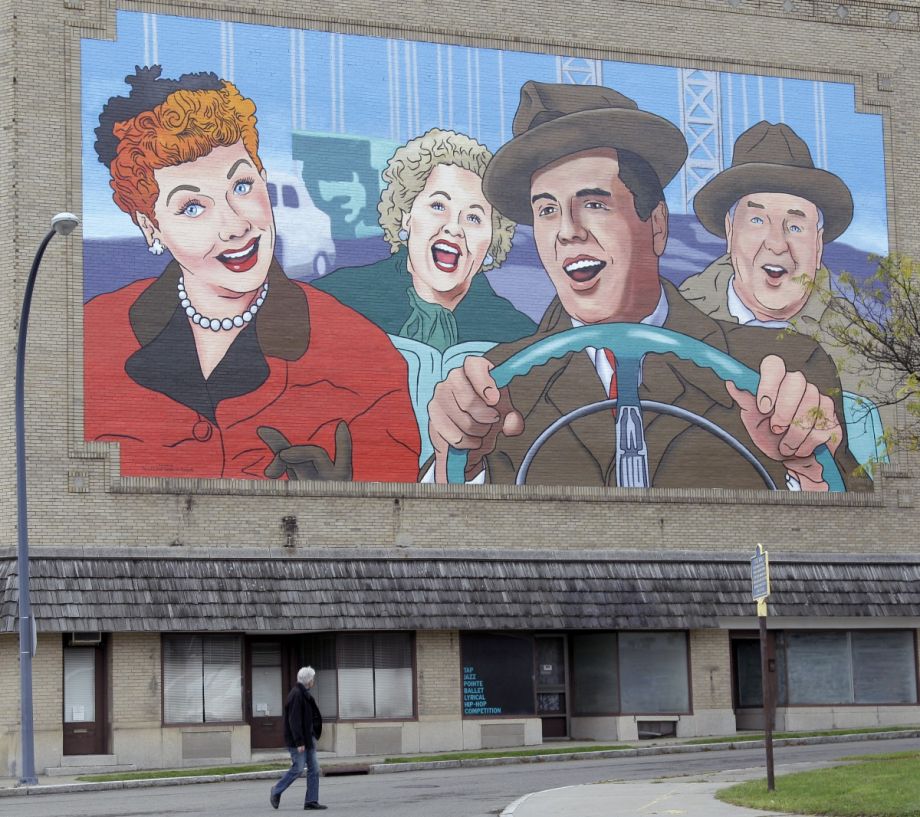 An “I Love Lucy” mural on a building in Jamestown, N.Y. The popular TV show signaled a shift in American living from cities to suburbs. (AP Photo/David Duprey)

We have been using popular TV shows for decades in speeches and the classroom to demonstrate the structural changes in how we build the country. Using television is an engaging way to examine how Americans have wanted to live since TV began to dominate American entertainment in the late 1940s. Popular shows also are important predictors of the future of the built environment, thanks to Hollywood’s extensive consumer research and the instant feedback to current shows, and so TV tends to reflect how we live today and, more importantly, what we aspire to tomorrow.

There have been two crucial times over the last 60 years when TV shows switched settings, reflecting society’s shifts in the way we have invested in infrastructure and real estate. We are in the middle of the second structural shift right now, which started in the mid-1990s. TV helped to predict that change.

We used a few criteria in selecting these top shows that indicate American desires about how to live and build our metropolitan areas. First, we focused on prime-time situation comedies and dramas (no daytime TV, sports, news or reality shows). Second, the built environment — walkable urban or drivable suburban — must play a significant, though generally subtle, role in the show.

Finally, we selected the most popular of six eras that captured best how we aspired to live “as seen on TV” based on time period and the development pattern that was being represented. Here, TV shows that pointed the way to the future.

In this era, the typical American TV family generally only lived one way: walkable urban, in a city. Nearly 60 percent (compared to more than 80 percent today) of Americans lived in metropolitan areas in 1950. Those were the only people who could be reached over the air then, and most were living in central cities, mainly living in walkable urban neighborhoods. In the early years of television, going after where and how the audience lived then was the predominant strategy.

The most important TV show in this category was “The Honeymooners” (1951-1957). It was about two working-class couples, living in less-than-glamorous Brooklyn apartments that are a far cry from the popular image of today’s Brooklyn. The characters’ lives were both grim and funny in a nasty sort of way. The housing shortage following World War II meant few households had housing options. Much of the action took place inside the main couple’s apartment, showing a cramped place with one small window. “The Honeymooners” and other shows like it reflected the housing reality of the era.

The first of the two structural changes in how we build metropolitan America started in the mid- to late 1950s as television determined that the walkable, urban-based sitcom was due for a change of location. The postwar housing shortage was being relieved by the explosive growth in the new massively subsidized drivable suburbs. At the same time, we were redlining walkable urban places, making it nearly impossible to obtain financing.

The most popular show in this era was “I Love Lucy” (1951-1957), which was among the top show every season it ran. This sitcom stars the Ricardo family, Lucy plus her real-life husband and son, living in walkable urban Manhattan. Importantly, the show documents the family’s move to drivable suburban Westport, Connecticut, in the third week of January 1957, the peak birth year of the Baby Boomers. Lucy cites the very reasons most people went to the suburbs: “clean, fresh air, homegrown foods and it’s great for baby Ricky.” Two episodes later, their best friends, Fred and Ethel Mertz, also leave the city to join the Ricardo’s in suburbia, demonstrating the appeal of this new way of life.

There are many TV shows to choose in this long and important era where drivable suburban development became the default option and the “new and improved” definition of the American Dream. Virtually all sitcoms and dramatic television in this era were set in a drivable suburban location.

The best one to highlight is “The Adventures of Ozzie and Harriet” (1951-1966), both because of its longevity and popularity. The wholesome Nelson family, the actual family of Ozzie, Harriet and their two sons, live in a suburban Los Angeles neighborhood, displaying all the charms of the newly available drivable suburban life. The “adventures” were almost entirely trivial. Everyday crises are resolved within the 24 minutes each show ran. It certainly got a boost when youngest son Ricky used it as the launchpad for a wildly successful music career, linking rock-and-roll with the dominant suburban development pattern where the Baby Boomers generally grew up.

Walkable urban locations became synonymous with dysfunction in the 1970s and 1980s. Most people portrayed in central cities on TV were either criminals, the poor or working class, or minorities and folks who had few choice in where to live, or the police, doctors, lawyers, judges and nurses who tried, and generally failed, to maintain some semblance of order. Walkable urban places were dangerous and crime-filled, and the problems were unsolvable.

Our choice for the best of this era is “Hill Street Blues” (1981-1987), a gritty depiction of urban life that won many awards for its realistic portrayal of the then crime-ridden walkable urban city. Set in an unnamed city, the program always opened in a police station, with cops trying to keep rampant disorder from overwhelming them. The avuncular sergeant would review the dangers they’d face on each shift, always ending with the admonition, “Let’s be careful out there.” This show was a fitting epitaph for walkable urban places in the 1980s, the worst decade for walkable urban life of the 20th century as the drug epidemics and crime peaked.

Era #5: The Rebirth of Walkable Urbanism (late 1980s to the present)

Academics and public policy specialists failed to predict it but starting in the mid-1990s, walkable urbanism in American cities blossomed following a drop in crime. Popular television predicted this second structural change, this time back toward walkable urbanism, similar to how TV predicted the shift from walkable urban to the drivable suburban pattern in the 1950s.

There are so many options for the best show predicting the re-birth of walkable urbanism, but the easy choice is “Seinfeld” (1989-1998). Single unmarried men and women, in their late 20s and early 30s and early in their careers, lived a safe, lively and exciting life in Manhattan. For Gen X and millennial viewers mostly raised in drivable suburbs, what wasn’t appealing? However, “Seinfeld” was a completely different and hard-to-understand image of city life for their Baby Boomer parents to grasp.

Era #6: Growing Dysfunction in the Suburbs (late 1990s to the present)

Television has also been predicting a trend that few a generation ago, including most social scientists, had a clue would happen: the growing dysfunction and crime in drivable suburbia. Over the past five years, research from Brookings Institution and elsewhere has documented this growing trend, but TV understood this first. This is not to say all drivable suburban places are in decline, far from it, but we now know that the majority of poverty and the growth in crime have been outside U.S. central cities, reversing a century-old trend. It also turns upside down the Jeffersonian image of cities being “sores” on our society and rural areas being virtuous.

The best TV show showing drivable suburbs as dysfunctional is “The Sopranos” (1999-2007). Tony Soprano’s home was a classic McMansion in the northern New Jersey suburbs, and his office was in a run-down suburban strip mall where, appropriately, he ran a strip club. The only hint of walkable urbanism was his “social club” located in a nearly abandoned suburban town center where he and his boys could sit outside on the sidewalk at bistro tables. Certainly there were scenes set in the city, but the real action was in rundown suburbs, the subdivision where the Soprano family lived or the office park where Tony’s psychiatrist worked.

Bonus: Special Award for a TV Show About Urbanism

There needs to be a special award for one of the most influential, longest-running shows of all time, which taught generations about walkable urbanism: “Sesame Street” (1969 to present). There has been some recent discussion about how this is the show responsible for the rebirth of walkable urbanism, having planted a seed in three-year-old viewers’ minds and seeing the image bloom decades later. So many learned about diversity, kindness on the street and racial integration (not to mention numbers and letters) from the remarkable role models who lived in the safe and secure walkable urban neighborhood on “Sesame Street.”

A probable next era of television could be raising children in urbanizing suburbs. The trend toward walkable urbanism is seeing both the redevelopment of our cities and the urbanization of the suburbs. As millennials and Gen Xers have had families, many have selected walkable urban suburbs like Pasadena in Southern California, Evanston in Chicagoland, and Bethesda, Silver Spring and Arlington in metropolitan Washington, D.C. Hollywood writers, pay attention.

There are many others that could have been selected. Let us know what TV shows you think best represent these eras in the comments below.

Chris Leinberger is a professor at the George Washington School of Business, chair of the GW Center for Real Estate & Urban Analysis, president of LOCUS, a coalition of real estate developers that is a project of Smart Growth America, and a nonresident senior fellow at the Brookings Institution. Lisa Leinberger has worked at the Phillips Collection, the first modern art museum in the country, and was one of the first female television-based movie reviewers.