Turning Health Care into Community Wealth in Cleveland – Next City 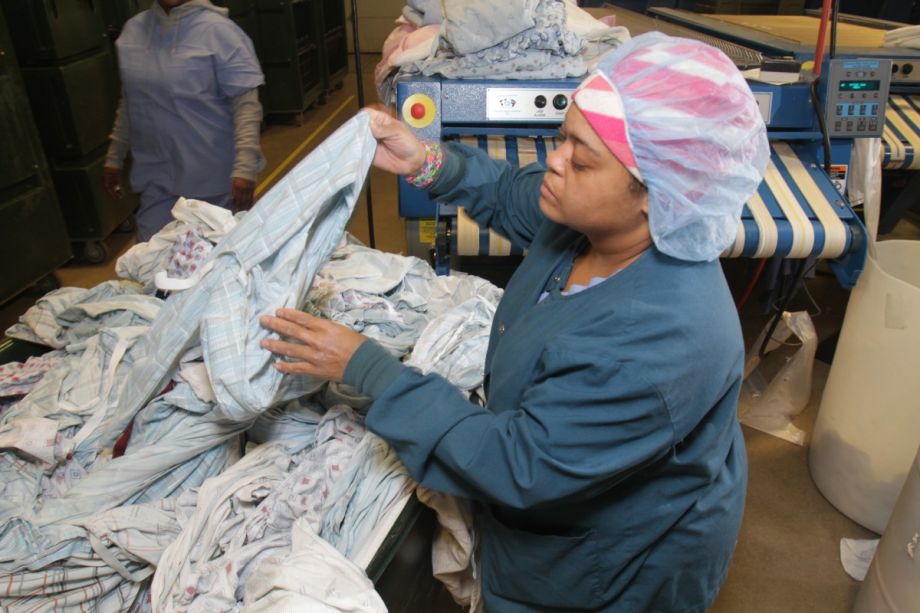 For 14 years, Olga Jebbison has processed laundry at a plant in Cleveland’s Collinwood neighborhood, on the eastern edge of the city, between the railyards and Lake Erie. She’s one of over a hundred currently employed at the facility, which currently processes 12 million pounds of laundry a year for the Cleveland Clinic.

In a major expansion of the company announced today, Evergreen Cooperative Laundry, a 100-percent worker-owned company established in 2009, is taking over management of the Collinwood laundry facility. Jebbison and her Collinwood co-workers will be offered an accelerated path to ownership, potentially becoming full worker-owners of Evergreen Cooperative Laundry in six months.

For Jebbison, who emigrated to the U.S. from Jamaica, it means that while her day-to-day job will remain exactly the same, she’ll soon have access to profit-sharing, bonuses and a first-time homebuyer program that helps the company’s worker-owners buy homes that can be paid off in four to six years. For new employees, it will mean a 15-percent higher starting salary than the previous Collinwood facility operator offered.

For Evergreen Cooperative Laundry, it means tripling the size of the company, currently at 50 worker-owners, and the biggest validation yet for a model that, while it had its growing pains like any other new business, is beginning to reveal its potential to leverage the buying power of major institutions like the Cleveland Clinic to create wealth for communities around them that have long been locked out of such opportunities.

“[The expansion] proves that local businesses can deliver at the quality and cost that institutions require,” says David Zuckerman, director of health care engagement at the Democracy Collaborative, a nonprofit research, advisory and advocacy organization with offices in Cleveland and Washington, D.C.

Ten years ago, the Cleveland Clinic joined the Cleveland Foundation, University Hospitals, Case Western Reserve University, the Democracy Collaborative and the city government to launch the Evergreen Cooperatives, a network of three worker-owned and worker-managed companies, starting with the laundry cooperative, later adding a construction cooperative specializing in renewable energy installation, and an urban agri-business cooperative. According to Evergreen Cooperatives, the median income in the six neighborhoods they target is $18,500.

But the co-ops weren’t prepared at the outset to fully meet the needs of such large institutions. The laundry co-op started small, serving just a few local businesses, and grew over time to processing around 8 million pounds of laundry a year. In 2016, the laundry co-op paid employees an average $24,000 in wages, plus each worker-owner’s shares of company profits.

Last year, independent evaluators at Cleveland State University determined that the laundry co-op was ready to expand, but noted that this expansion would require deep investment in new equipment or facilities — an investment that would be difficult given their inability to access traditional lending as a cooperative business. Taking over management of the Collinwood plant, which the Cleveland Clinic owns, got them over that hurdle.

“For us to have the ability to contract operate the Collinwood plant is the truest sense of partnership,” says Brett Jones, executive vice president of the Evergreen Cooperatives.

For the Cleveland Clinic, one of the largest and most revered health care institutions in the nation, it was an intentional choice to leverage resources beyond its clinical care to impact the health, wealth and wellbeing of its surrounding community and in partnership with its surrounding community. Some 80 percent of a person’s health is determined not by clinical care but by the conditions in which he or she lives — their access to economic and social opportunities, quality schooling, workplace safety, clean water, food, and air, a sense of belonging and more.

Nationwide, hospitals and health care systems spend $782 billion per year, employ nearly 6 million people, and control investment portfolios of $400 billion, according to the Democracy Collaborative’s research. Other cities, such as Rochester, N.Y., are now looking to replicate the Evergreen model of connecting worker-owned companies as suppliers to large local institutions like hospitals as well as universities.

At the same time Evergreen Cooperative Laundry is taking over the Collinwood facility, the Cleveland Clinic is making investments to bring the facility’s laundry processing capacity up to 19 million pounds a year. At that capacity, Jones says, the facility will support 165 jobs.

In turn, those jobs promise an estimated $12-14 million impact on the local community, says Ralph Turner, executive director of patient support services at the Cleveland Clinic. Turner says the Cleveland Clinic’s Supply Diversity Department is tasked with ensuring that six to 10 percent of their procurement dollars go to minority-owned businesses and small enterprises, both locally and elsewhere.

“Establishing the foundation for people to stabilize their incomes and become part owners in a business … in itself generates health and wellbeing in our community,” says Turner.

Charles Cowlin is an Evergreen worker-owner who just moved to the Collinwood facility after eight years working at the co-op’s original Glenville plant. A veteran, he was hired by Evergreen Cooperative Laundry at a time when no one else would hire him because of a felony on his record.

“I told them if they hired me, I wouldn’t let them down, and I’ve been here ever since,” he says. Becoming a worker owner “changed my perspective on life … It gave me another purpose, coming from wanting a job to now being part of something, being co-owner of a business.”

He grew up in the Glenville neighborhood, surrounded by signs for the Cleveland Clinic that is now his company’s client. Earlier this year, he paid off the house he bought through the company’s homebuyer program.

“I never dreamed anything like it,” Cowlin says. “The community I was raised up with, now they have this business and I’m a part owner in the same community that I grew up in. That’s a wonderful thing.”

Sarah Trent is a freelance journalist based in Oakland. She covers social justice and equitable development in communities, business, food, and finance.