Tulsans Betting That Remote Workers Will Fall in Love with Tulsa 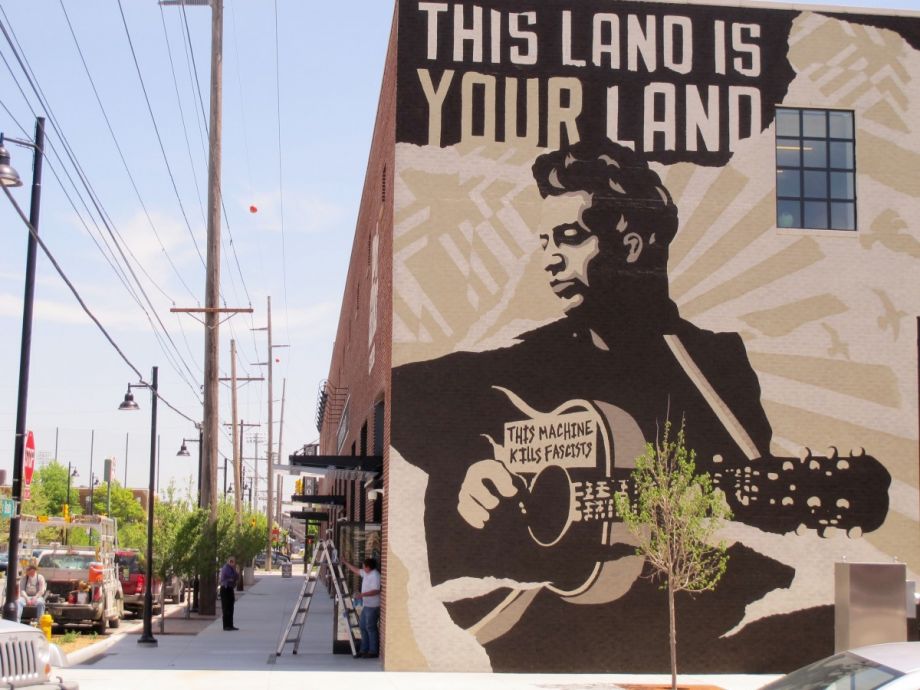 This April 25, 2013, photo shows workers put the finishing touches on the Woody Guthrie Center, which features a mural of the Oklahoma-born folk singer/songwriter, in downtown Tulsa. (AP Photo/Justin Juozapavicius)

In 2016, a small group of young professionals in Tulsa decided it was time for a new city flag.

The existing flag was boring, they thought — nothing but the city seal on a plain white backdrop. And it was of limited use besides. The Tulsa seal is copyrighted, and can’t be used for any reason without the explicit permission from the city. So they started a social media campaign and held a design competition to develop a new one.

The winning design was symbolically rich: A blue stripe and a golden line to represent the Arkansas River and the “black gold” oil deposits that made the city grow, a shield representing the Native American tribes forcibly removed to “Indian Territory” in what is now Oklahoma, and a red circle to represent the violence of the 1921 Tulsa race riot, in which a white mob attacked the city’s Black Wall Street, killing and injuring hundreds of people.

The Tulsa City Council was hesitant, at first, to make the new flag official, according to reports in the Tulsa World. But the #TulsaFlag organizers had released the design into the public domain, and Tulsans began adopting it as the unofficial mark of hometown pride. In October, in recognition of what a local columnist called “a grand experiment in grassroots democracy,” the council voted unanimously to make it official.

“Tulsa is a place where individuals don’t have to wait to be involved,” Bolzle says. “They can immediately get involved and make an impact the moment they get here.”

In hopes of convincing more young people to give Tulsa a chance, the George Kaiser Family Foundation is now offering $10,000 each to a select group of remote workers who will commit to moving to the city and staying for at least a year. The program, called Tulsa Remote, will provide selected applicants with $2,500 for upfront moving costs, a small monthly stipend, and a final payout at the end of the year. It also provides space at a downtown coworking space called 36 Degrees North, and offers for discounted rent in downtown apartments. To be eligible, applicants have to be at least 18, employed remotely or self-employed outside of Tulsa, and go through an interview-like process with a personality assessment firm that involves a video chat and visit to the city.

In the first 48 hours after the offer became public, Bolzle says, the website got 20,000 visitors, and 1,700 people applied. The foundation, which is covering the cost of all the benefits as taxable income, plans to accept 20-25 applicants in the first year.

“I think that Tulsa being open to diversifying their workforce by attracting remote workers who already have remote income only helps the overall community,” Bolzle says.

Aside from cash, the program is relying on Tulsa’s innate charms to attract applicants: Very low cost of living relative to other cities, easy commutes by car, and a downtown arts and entertainment scene that’s picking up steam.

Even just a decade ago, “One of the bigger knocks on the town was that there was nothing to do,” says Adam Doverspike, the chair-elect of Tulsa’s Young Professionals, a group formed in 2005 by the Tulsa Regional Chamber of Commerce.

Doverspike is a lawyer, and he lived for ten years in Washington, D.C. There, all the charities were nationalized, he says, so it was tough to feel intimately connected to any organizations, and his commute to work was 45 minutes on the metro. When he moved back to Tulsa, his hometown, he says that looking at real estate was like winning the lottery. He ended up with 1,000 more square feet than he had in D.C. and a ten-minute drive to work, with hardly any congestion.

Will cash offers really convince people to move to a place they otherwise wouldn’t move to? Or will they only attract people who were already planning to move? Time will tell, though the Tulsa Remote program is also notable in providing financial incentives to remote workers at no cost to taxpayers, says Bolzle. (A similar program in Vermont was signed into law last summer. Officials in Vermont did not respond to a request for an interview.)

Success for Tulsa Remote would mean that some portion of the accepted applicants fall in love with the city and choose to stay beyond the required year.

“We have absurdly cheap real estate, and it’s not like you have to go 30 minutes outside the city,” says Doverspike. “The lifestyle you can have at a 20- or 30-something income in some ways is a lot better. You’re not paying a huge dividend just to be in a big city … We’re pretty confident that once you spend some time here, a good chunk of those folks are gonna stay.”