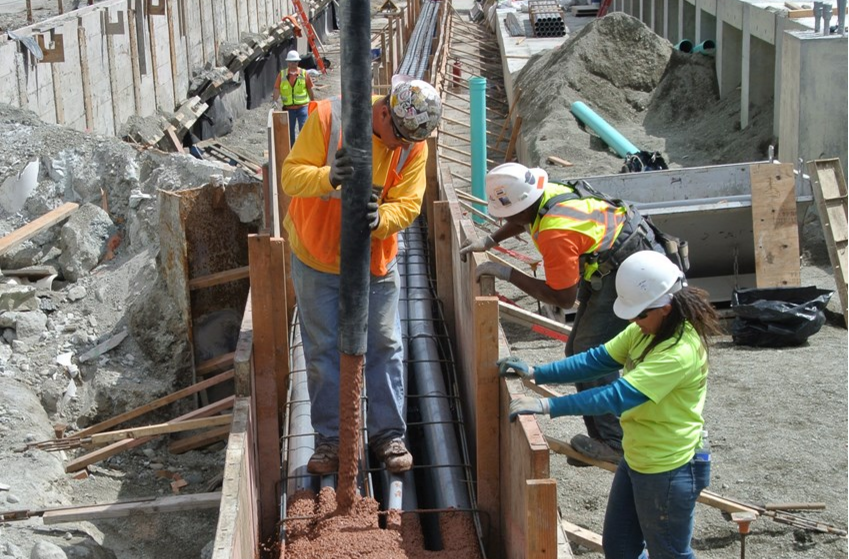 Workers on the Seattle waterfront (Credit: City of Seattle)

President Donald Trump wants to build highways through black communities, but he doesn’t want to hire from them.

His administration announced last week its withdrawal of a proposed rule change, put forth during President Barack Obama’s tenure, that would have allowed state and local governments receiving federal transportation dollars to apply local hiring preferences to contracts awarded using those dollars. The withdrawal reverts the Federal Highway Administration and Federal Transit Administration back to rules set during the Reagan administration, which prohibited any geographic-based hiring preferences in contracts using federal transportation dollars.

The withdrawal of the proposed rule change appears to nix a DOT local labor hiring pilot program based on the proposed rule. Known as “Special Experimental Project No. 14” or SEP-14, the Obama administration put the pilot program in place as a trial for a limited number of cities to test whether or not local or economic preference in hiring would increase construction costs or reduce competition in the contract bidding process. The DOT approved 14 projects under SEP-14, in roughly 10 metropolitan areas. With no proposed rule to support evidence gathering, advocates believe the program is essentially dead.

“Many of these jobs were finally addressing long-term unemployment — many, for people of color,” Angela Glover Blackwell, CEO of PolicyLink, an economic and social equity think tank, told Capital & Main. “This is yet another example of the Trump administration not standing up for jobs for the nation’s most vulnerable.”

The proposed rule change would have complemented and leveraged local hiring programs in a number of cities — like Seattle, or New Orleans (where the state legislature already tried to nix the local hiring program). Baltimore’s local hiring ordinance covered over $832 million in contracts in the first two years after it went into effect in 2013, with 67 percent of new hires under those contracts being Baltimore residents.

“This administration’s withdrawal of support for local job creation directly contradicts President Trump’s stated commitment to creating good jobs for people in this country,” said Madeline Janis, executive director of Jobs to Move America. “Many Americans continue to suffer from poverty and inequality and desperately need the opportunities that are created by our federal infrastructure and transportation investments.”

Marvin Kropke, business manager of the International Brotherhood of Electrical Workers, Local 11, said, “IBEW Local 11 has created the largest certified electrician’s apprenticeship program in the country, opening up career-path construction jobs to 1,700 new workers from South Los Angeles to Long Beach. We have been able to do this in large part because of local hire programs that push contractors to recruit new workers from low-income communities.”

“Local hire has allowed municipalities to use their own money to help employ people directly from their communities. It has been strategic for our elected leaders to say that they’re not going to raise our tax dollars for investments in capital projects without ensuring that persons facing significant barriers to employment get expanded access to good jobs and training opportunities,” said Erik Miller, executive director of Playa Vista Job Opportunities and Business Services.

Under SEP-14, state and local governments could apply provisions for local hiring or hiring based on economic status, such as low-income households or veterans. Each approved project was required to produce an evaluation to determine the impact of its proposed hiring plan in terms of meeting the hiring goals as well as any impact on project costs and maintaining historical levels of competition in bidding. Some plans proposed only hiring requirements, others proposed incentives for hiring locally or from low-income households, some included both.

One evaluation has been produced so far, pertaining to an SEP-14 project from San Bernardino County, California. Under the project, a $6.8 million job to improve and widen a highway interchange, the contractor is awarded a $5 subsidy for each hour of work performed by qualified local or veteran workers beyond 20 percent of total hours worked, up to a project maximum of $50,000.

The project, which was 18 percent complete at the time of the evaluation, recorded 30 percent of total hours worked by local or veteran workers so far. In terms of competition, the county received bids from 10 contractors, which it claims is in line with previous contract opportunities. The county also claims the local and veteran hiring preferences did not have any impact on the construction costs.

Trump’s national infrastructure plan, while mostly a mystery still at this point, hints at how the administration might resolve such conflicts. According to the New York Times, the plan proposes a “one federal decision policy,” meaning one agency will take the lead in coordinating permits and reviews with other agencies. If U.S. DOT takes the lead on a trillion-dollar, multiagency infrastructure bill, its no-preference hiring policy may supersede all others.