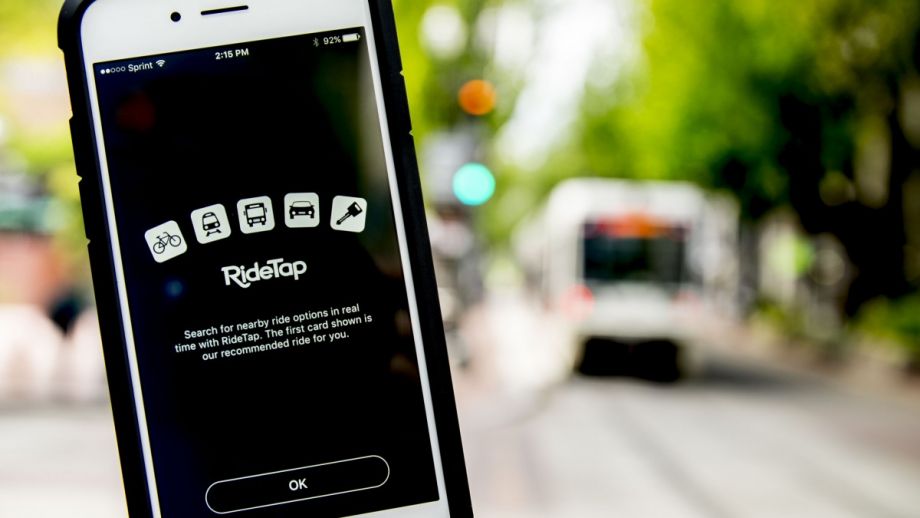 Smartphone-owning transit passengers in Portland got a new travel app option this week. Mobility technology company moovel and Portland transit agency TriMet are partnering on a pilot that will allow users of the TriMet app to view connections to alternative transportation modes like Lyft and Car2Go without switching to a new program. RideTap, developed by moovel, is a software development kit, not an independent app, that can be integrated into any existing platform to provide transit users with a real-time overview of nearby travel options.

Say you’re taking MAX light rail, for example. The TriMet app, which also lets users purchase tickets on their phones, now has an option called “More Rides Nearby.” Tapping it pulls up a screen displaying non-agency connections. You can check out the Car2Go locations closest to the upcoming station, or find the distance to and a price for the nearest Lyft. As you disembark at your stop, your last-mile ride could be keyed up.

RideTap’s pilot in Portland follows a history of partnership between TriMet and GlobeSherpa, a Portland-based company that was folded into Daimler-owned mobility tech company moovel, along with Austin-based startup RideScout. GlobeSherpa worked with TriMet to create the agency’s mobile ticketing platform. More than 80 percent of TriMet riders have a smartphone, says TriMet communications coordinator Andrew Longeteig. That creates both an opportunity and a need to stand out. “There’s a glut of mobile apps on the market right now,” he says. Instead of requiring transit riders to open separate apps to check the availability of Lyft, Uber, Car2Go, bike-share and so on, RideTap aims to aggregate all of those connections in a single interface.

“We want to be a partner in that and help figure out how to best move people around the city, especially a city like Portland that’s growing exponentially at the moment, where there’s a lot more traffic congestion even in the last few years,” says Longeteig. “A lot of residents are feeling the crunch there, so we’re trying to help people move around the city without a car, because it’s getting harder and harder to get around with a car, as in many other cities, like Austin.”

While transit agencies are eyeing hookups with ride-hailing to solve the first mile/last mile problem, skeptics charge that what Uber and company’s integration with public transportation does best is provide free advertising for the private companies. Supporters of greater integration argue that these companies only improve public transit access. Others have concerns about the impact on low-income riders — who are less likely to use smartphones or credit cards.

Longeteig says TriMet sees public transit and private services as complementary. “You see the influx of people from rural areas to urban areas, and that creates transportation challenges,” he says. “This is just part of a larger movement to help people get around our crowded cities. If we get more cars off the road, it’s better for everybody.”

Only Lyft and Car2Go are participating in the TriMet pilot, but Longeteig envisions adding more options in the future, like Portland’s soon-to-launch bike-share program. “We see it as more the merrier,” he says.

Moovel CEO Nat Parker says RideTap isn’t just for transit agency apps, either. Any third-party software developer can integrate RideTap into a program. An app that reviews restaurants or books hotels could embed RideTap, allowing users to see the full gamut of transit, bike-share, car-share and ride-hailing options to get them to their destination. Any mobility service, whether public or private, can share its data with RideTap.

Once users select their ride — let’s say it’s Lyft — they’ll be directed to Lyft’s app to complete payment. (If they don’t already have that app, users will be taken to a screen to download it.) Parker says in the future he hopes RideTap will include not just information sharing, but also integrated payment, in which a single host account would permit payment across many transportation providers.